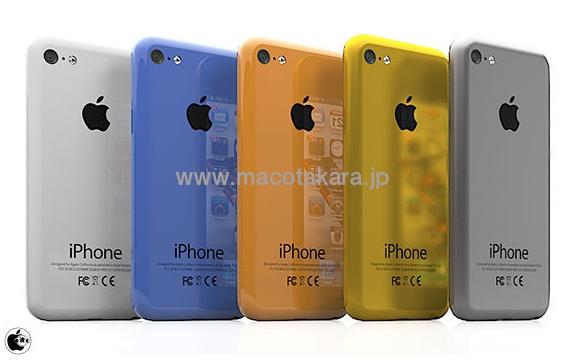 Apple looks set to finally abandon its black-and-white-only approach to the iPhone, with yet another report suggesting the next iteration will hit stores in a range of colors – including gold.

Japanese Apple-news site Macotakara (via MacRumors) reported on Thursday that both the 5S and the rumored low-cost iPhone are set to ship in a variety of colors, offering iPhone customers a few more options besides the usual black and white flavors.

The site’s unnamed source says the 5S, if indeed that’s what Apple decides to call it, will ship in two additional colors: gold and green. The gold option links up nicely with a report last week that featured a gold-colored component said to be part of the next-generation iPhone.

The expected budget iPhone, which is reportedly heading for emerging markets, could come in navy, gold orange, white, and gray, says Macotakara. However, another source suggested a slightly different set of colors: white, pink, green, blue, and yellow orange.

There’s been talk for some time about the possibility of Apple launching the iPhone in more colors. Last year the tech giant unveiled the latest iteration of its iPod Touch device in a range of new colors, so it’s perfectly reasonable to think it’ll do the same with its smartphone.

The news comes a day after Samsung announced new colors for its fast-selling Galaxy S4 handset, a phone which this week passed the ten-million-sales mark – less than a month after launch. The Korean company’s flagship handset will arrive this summer in blue, red, purple and brown.

The low-cost iPhone would reportedly be built with a plastic case and sell for between $350 and $400 without subsidies. Though Macotakara suggests it’ll ship this September, some reports have pointed to a launch date some time next year.

As for the 5S, many Apple watchers are expecting an announcement in August or September this year.

Video-editing app LumaFusion to get a Galaxy Tab S8 launch
The best iPhone 11 wallet cases and covers
Best Phone Deals: Save on Google Pixel 6, Galaxy S22 Ultra
Best tablet deals for September 2022
Best iPhone deals and sales for September 2022
Hey look, the iPhone’s Dynamic Island has come to … Android?!?
Why I stopped wearing my smartwatch — and why I haven’t looked back
How to transfer your SIM from an Android phone to an iPhone 14
Google Pixel Tablet leak reveals key specs about the mysterious device
How to buy the new Apple Watch Series 8, SE, and Ultra
Nothing teases its next wireless earbuds with photos of a lipstick-like case
How to see which apps are draining your iPhone’s battery life
The iPhone 14 gets a stunning transparent back with this new mod