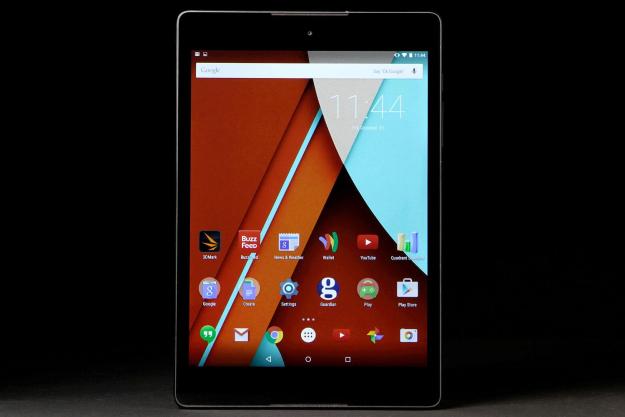 “With high-class looks, power, and the polished poise of Lollipop, the Nexus 9 is a real challenge to the iPad.”

Google turned the tablet market on its ear when it introduced the Nexus 7 in 2012. The first Nexus tablet packed a powerful processor and attractive screen into an affordable package that couldn’t be beat. Two years later, Google is leaving its legacy of competitive pricing behind in favor of creating a high-end Nexus tablet that can compete with heavy hitters like the iPad Air 2 and Sony Xperia Z2 Tablet.

Google partnered with wannabe tablet maker HTC to make the Nexus 9. Even though it’s larger than previous Nexus tablets, the Nexus 9 is lightweight, thin, and portable. Its high-class looks and powerful processor make it a very appealing iPad Air 2 alternative for Android fans.

The Nexus 9 is undeniably a powerful, beautiful tablet and to top it all off, it’s running pure Android as Google intended. But will the allure of Lollipop, a killer screen, and long-lasting battery be enough to catapult the Nexus 9 into the big leagues?

The Nexus 9 looks very sleek at first glance. It has a grippy matte plastic back that’s encircled by a sturdy metal frame. The edges are slightly angled in toward the screen to offer a comfortable place to rest your thumbs. HTC designed the Nexus 9, though there’s very little about it that screams HTC, except for the two front-facing BoomSound speakers. It’s a Nexus device through and through and the logo is proudly displayed on the back.

The plastic back made a disturbing spongy, popping sound when we pushed it lightly.

Both the power button and the volume rocker rest on the right-hand side. The buttons are almost flush with the tablet’s edge and feel a little flimsy. A Micro USB port rests on the bottom of the device and the headphone jack is up at the top. The Nexus 9 is a tad thicker in the middle than it is at the sides, so half of the back camera module sticks out. That’s typical on a device that’s 7.95-millimeter thick, but since it’s not symmetrical like the camera bulge on the iPhone 6, it looks accidental.

Although Google says the back panel shouldn’t be removed, you can actually pull it up part of the way from the bottom the edge near the Micro USB port. Doing this causes the back panel to loosen, and ours never felt the same again.

The plastic back isn’t terribly sturdy and we noticed some flexing – it even made a disturbing spongy, popping sound when we pushed it lightly. A flimsy plastic back might have sufficed on a $200 tablet, but on the $400 Nexus 9, it’s inexcusable. However, that’s really our only complaint with the Nexus 9’s design. Otherwise, it’s a very attractive tablet that’s comfortable to hold, even though it’s much larger than the Nexus 7.

Part of the reason why it’s so comfortable to hold is that the Nexus 9 weighs just 425 grams. In contrast, the all-metal iPad Air 2, which is incredibly thin and light itself, weighs 437 grams. The Air 2 is thinner by almost 2 millimeters, though.

Google offers the Nexus 9 in three different colors, including Indigo Black, Lunar White, and Sand. It’s also got some really great, colorful origami covers that attach magnetically to the tablet’s real metal frame. Google showed us a magnetic keyboard cover, too, but we didn’t get to review any of those.

It’s always a pleasure to experience pure Android the way that Google intended, but Lollipop 5.0 is my favorite version of the OS yet. Material Design makes beautiful and bright. Notifications now show up on the lockscreen on white cards that look as though they’ve been pulled from Google Now. The settings menu and app drawer got a whitewash, too. Google redesigned the home, back, and menu buttons, as well. It reminds us of the Aviate launcher, which is now owned by Yahoo.

Google has finally shaken its ugly duckling reputation and emerged as a swan.

Lollipop adds some fun animations to the mix, which helps break up the monotony of the Flat UI-inspired design. When you tap on the app drawer, all your apps pop up from the bottom and then spring back down when you tap the Home button. The notification shade also pops and flexes. A short drag down from the top of the screen reveals just your notification cards, but a long pull reveals quick settings on a charcoal gray background.

Just like the Moto X and LG G3, you can wake the Nexus 9 simply by double tapping on the screen. You’ll then see all your notifications at a glance. Another one of my favorite features is the option to add a guest user. Adding a guest is not like adding a new, permanent user. When you add a guest, a temporary account is generated, so that when you hand the tablet over to your little sister or slightly untrustworthy friend, they don’t have access to any of your stuff. The tablet essentially resets itself to give the guest a blank slate. The guest can then add their own Google account, download app, and do whatever else they want without disturbing your stuff or buying things with your account details. When the guest is done, you simply remove the account and it’s like they were never there – poof!

Version 4.4 (KitKat) cleaned up Android and greatly improved the overall look and feel of Google’s OS, much like iOS 7 radically changed Apple’s mobile platform. However, Lollipop really takes KitKat to the next level, adding polish and poise to what used to be the uglier — though more functional — mobile OS. With 5.0 Lollipop, Google has finally shaken its ugly duckling reputation and emerged as a swan.

When it comes to specs, the Nexus 9 is undoubtedly the most high-end tablet Google as ever made. Google broke with tradition on the Nexus 9 and chose a 4:3 aspect ratio, which is unusual for Android tablets. The device sports an 8.9-inch screen with the exact same resolution as the iPad Air 2. Of course, since the screen is smaller, that 2,048 × 1,536 pixel resolution results in a higher pixel density of 281ppi (pixels per inch). Needless to say, the screen on the Nexus 9 is stunning. The colors are bright, deep, and true. The larger, sharper screen sets the Nexus 9 apart from Google’s earlier tablet efforts.

The plastic back made a disturbing spongy, popping sound when we pushed it lightly.

A 64-bit Nvidia Tegra K1 “Dual Denver” processor running at 2.3GHz powers the Nexus 9. The tablet also sports 2GB of RAM and comes in 32 and 64GB storage options. Sadly, there’s no MicroSD card slot for memory expansion and a tablet with 16GB of storage just doesn’t cut it any more. For many, 32GB won’t be enough either. It’s a shame that there’s not a 64GB or 128GB option, especially since the Nexus 9 will be in direct competition with the iPad Air 2, which offers more storage options (albeit for a much higher price).

Google’s new tablet is wicked fast, zipping through tasks quickly and rarely faltering. I streamed videos on YouTube and updated dozens of apps at the same time without incident. The back top of the tablet felt hot when I used it for a long time, but the bottom portion where I was actually holding it stayed cool. The Nexus 9’s larger screen makes it the perfect size for streaming videos and Web browsing, and it does both tasks well.

In benchmark tests, the Nexus 9 performed very well. It managed to score 25,158 on the 3D Mark Ice Storm Unlimited test, which is significantly faster than one of he best Android tablets around, the Sony Xperia Z2 Tablet. It also pulled off great scores in the Geekbench 3 test, hitting a single-core score of 1,920 and multi-core score 3,315. Meanwhile, the iPad Air 2 pulled off an incredible Geekbench multi-core score of 4,400 in the same test. The Nexus 9 hit just 13,267 in the Quadrant test, which was surprisingly low in comparison with the Samsung Galaxy Tab S 10.5’s score of 19,900 and the Z2 Tablet’s score of 18,100.

Still, benchmarks aren’t everything and we found the Nexus 9 to be fast and responsive in real-life tests.

Camera will do the job, if need be

The Nexus 9 has the obligatory two cameras: an 8-megapixel rear shooter and a 2-megapixel front-facing camera. The camera takes as good of photos as you’d expect from your average tablet, but the shots aren’t as sharp as those you’d take with the iPad Air 2’s revamped camera. Still, most people don’t use their 9-inch tablets for photo taking, or at least we sincerely hope not, so it’s no big deal. In a bind, your camera needs are covered.

Epic battery life will keep your Nexus ticking all day

Google outfitted the Nexus 9 with a huge 6700mAh battery, which lasted for just over 9 hours during our testing. This is the ultimate tablet to bring on a trans-Atlantic flight — it will keep running during the entire trip, even if you’re watching video the whole time. Google’s done some incredible work with Project Volta and it shows. The Nexus 9 is one of the most long-lasting tablets money can buy.

Google is rewriting the rules again with the Nexus 9, proving that a tablet can be high-end and hit stores for a hundred dollars less than it closest competitors. Its sharp screen, portable design, zippy processor, and long battery life make it a viable option for Android fans who want a high-end tablet to match their top-of-the line smartphone. 5.0 Lollipop is a true pleasure to behold and for most, it doesn’t get better than pure .

Even so, the Nexus 9 is not without its problems. The build quality leaves much to be desired and the lack of more storage options or at least a MicroSD card slot set the tablet back. For the most part, the positives outweigh the negatives and Android users should definitely consider the Nexus 9, despite its $400 price tag.