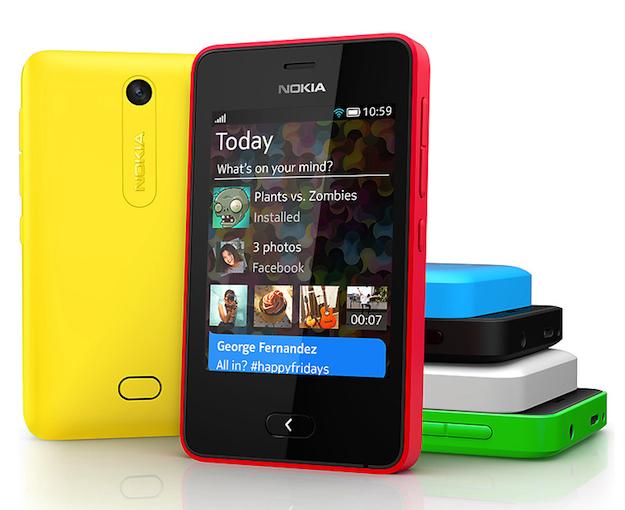 When Nokia confirmed the Asha 210, the QWERTY keyboard-equipped budget phone launched a little over two weeks ago, we had speculated the event could have also been used to show the touchscreen Asha 501, which had been leaked several times, and had an interesting Lumia-inspired design. While that wasn’t the case at the time, we haven’t had long to wait until the phone has appeared.

The Asha 501 has been revealed at an event in New Delhi, India, and not only does it boast a funky new design, but it also has a new operating system too. That’s right, Series 40’s UI has left the building, and in its place is the Asha platform, an easy-to-use OS built with the help of Smarterphone, a company Nokia acquired last year.

It’s made up primarily of two main screens, named Home and Fastlane, the first of which displays all the usual app icons and shortcuts. Fastlane is the part where the phone becomes easier to use, as it gathers all the features and apps you use regularly, plus those accessed most recently, into one place. Nokia’s press blurb says it helps multi-tasking, as it provides easy access to users’ favorite features.

The Asha platform is an open source, standards based piece of software, therefore challenging other forthcoming new operating systems – aimed at low-cost hardware – including Mozilla’s Firefox OS and Samsung’s Tizen. Nokia has released a software development kit, and a new in-app payment tool to help attract developers, and expects to shift 100 million next-generation Asha phones over the coming years. At launch, apps for most social networks will be ready to download, including Twitter, WhatsApp, Facebook, and Foursquare, plus games from EA – forty of which will come free with the phone – and Gameloft.

So what about the phone? As with other Asha devices, it’s no technical marvel, but it is cheap. The touchscreen measures 3-inches and has a resolution of 320 x 240, while there is a 3.2-megapixel camera on the rear, a microSD card slot, plus Wi-Fi, and Bluetooth 3.0 are both built-in. It’s only a 2G phone though. The bright rear covers are interchangeable, and the whole thing weighs just 98 grams. Nokia will make two versions, one with a dual-SIM slot, and the battery life for the single-SIM model is a predictably massive 48 days.

Nokia will be releasing the Asha 501 in 90 countries, with the first devices hitting stores in June, when the little phone will have a $99 price tag. Exact locations haven’t been confirmed, but deals with networks in India, Africa, Asia-Pacific and Latin America have all been reached.

Video-editing app LumaFusion to get a Galaxy Tab S8 launch
Apple vs. Samsung: Who has the best lock screen customization in 2022?
The Pixel 7 is Google’s iPhone, and it’s my favorite Android phone so far
How to set up and use Hive Social as your next Twitter replacement
Your iPhone may be collecting more personal data than you realize
Latest iPad just got its first proper discount for Black Friday
I love the Oura Ring, but I’m increasingly worried about its future
Why GPS is critical to your smartphone — and desperately needs an overhaul
Kindle Black Friday deals just landed – save on Paperwhite and Oasis
Garmin watch Black Friday deals: Forerunner 45 and Vivoactive 4
How to block someone on WhatsApp messenger
Best stylus for tablets and computers: Top pens for note-takers and artists
Should you buy an iPad on Black Friday or wait for Cyber Monday?