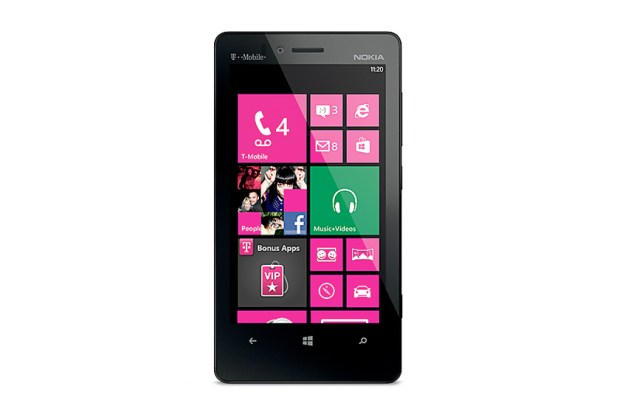 “Despite the less than elegant design, the Nokia Lumia 810 is a good Windows Phone 8 device that offers speedy performance, a nice display, and a decent camera. However, if you’re not a T-Mobile customer, this is not a device that entice you to switch. You can get a Lumia with almost the exact same specs for much less on AT&T or Verizon.”

Nokia is banking on Windows Phone 8 to make the company relevant to U.S. customers again. Its full line of WP8 devices feature distinct and colorful designs coupled with shockingly low prices … except for the Lumia 810. The 800 series Nokia models are smaller than the big daddy Lumia 920 and don’t have high-end specs, yet T-Mobile’s $150 Lumia 810 is very similar to the Lumia 820 and 822, despite costing more than both on contract.

T-Mobile customers are used to this state of affairs. It’s the trade-off they make for the lower monthly fees. So should buyers looking for their next (or first) T-Mobile phone choose the Lumia 810 over the other Windows Phone 8 choices (like the HTC Windows Phone 8X)? Read our full review to find out.

Compared to the other Windows Phone 8 offerings, including those from Nokia, the Lumia 810 isn’t as flashy or svelte. It looks downright bulky in comparison to the HTC 8X, which has a larger display, and the Droid Razr M, which has the same size screen. The Lumia isn’t a heavy phone at 5.1 ounces and technically not super thick at 0.43 inches. Still, it looks more workman-like than elegant. Anyone looking for style should look elsewhere. You won’t find it here.

This is usually excusable for a budget phone, except this model, which is nearly identical specs-wise to the Lumia 820 and 822, costs more than either of them on contract. You can buy the Lumia 820 at AT&T for $50 and get a more attractive design with colorful and interchangeable back plates or a Lumia 822 on Verizon for $100. You can even get the larger, more powerful Lumia 920 on AT&T for $100.

There are a few nice design touches. We like the rubberized back as it offers a comfortable grip, and the flat edges make finding and pressing the buttons easier. All of the buttons are on the right side of the phone, which is the position we prefer. We also like that there’s a hardware shutter button for the camera.

Since there’s no flair to distract you, the edge to edge Gorilla Glass front is even more prominent and impressive. And the 4.3-inch AMOLED display offers popping colors and deep blacks and thus provides a good showcase for the Windows Phone 8 interface. We’re not excited about the 800 x 480 pixel resolution though, especially as most budget phones have 960 x 540 pixels and top-designs are now pushing 1920 x 1080 pixels. The viewing angles are wider than the HTC 8X and watching video on the 810 is a pleasant experience.

As we mentioned in our review of the 8X from HTC, Windows Phone is a good mobile OS that hasn’t had much chance to shine. Even though the Lumia 810 isn’t a flagship or high-end phone, it’s still a good ambassador for WP8.

Despite the low resolution, the experience with the Start Menu is just as good as on larger phones. Start is the hub of Windows Phone 8 and features customizable live tiles that offer heads-up information similar to widgets on Android.

WP8 is best at pulling together related information and apps into hubs that make it easy to find and utilize what you need wherever you are on the phone. Camera Lenses gives you access to third-party camera apps from one location; the Me tile shows notifications from multiple services (Facebook, Twitter, and more); and Rooms makes it easy to share and message with a specific group of people, be it family, friends, or co-workers.

In addition to the Windows Phone apps, there are a ton of pre-loaded Nokia and T-Mobile apps. Just as on Android, the mobile carrier apps aren’t very useful beyond the one that helps you keep track of your account and data usage. The Nokia apps are much more desirable.

The highlight of Nokia’s offering is a group of travel/commuting apps that radiate out from Nokia Maps. Drive and Transit offer directions and travel times whether you’re a driver or you ride public transportation. The data offered isn’t as good as knowing the area yourself, but is good enough for getting around if you don’t want to download a local transit app (or there isn’t one yet). City Lens is also a good one for travel and for people exploring unfamiliar parts of a city.

It’s no surprise that with Nokia’s focus on great cameras, the company has also provided several camera apps to enhance pictures or make taking them easier. Smart Shoot, Cinemagraph, Panorama, and Creative Studio are listed as being on the device, but when you open them for the first time you get a prompt to download from the store.

The only app we could do without is App Highlights, which is mostly a recommendation engine that isn’t much better at making app discovery easier than the Microsoft Store.

Currently, there are only around 120,000 apps available to Windows Phone 8 compared to about 700,000 available for Android and iOS devices. Microsoft boasts that 46 of the top 50 apps are in its store, including Facebook, many Zynga games, Skype, Kindle, and Netflix. But, try as it might, there are bound to be some of your favorite apps missing. And since Windows Phone is still building momentum, it may be a while before top 100 and top 200 apps make it to the platform.

Though the 810 is smaller and less tricked out than the flagship WP8 phones, it has the same processor inside and offers similar performance. The Lumia 810 runs on a dual-core 1.5GHz Qualcomm Snapdragon S4 processor backed by 1GB of RAM. Inside, there’s 8GB of internal memory, but you can add a microSD card up to 64GB in size to increase the capacity. Connection options include b/g/n wireless, Bluetooth 3.0, and NFC plus a GPS radio. The Lumia’s 1800mAh battery can be charged wirelessly, just as with other Windows Phone 8 Lumia models. An 8-megapixel Carl Zeiss lens graces the back of the phone along with a dual-LED flash; a 1.2-megapixel camera sits in front.

The Lumia 810 performs on par with the HTC Windows Phone 8X – no surprise since they have the same processor. Apps open speedily and we swiped around in the interface with no lag. Some of the apps we downloaded form the Windows Store didn’t open as fast as those that came on the phone, and Internet Explorer seems to take a lot longer to load full Web pages as opposed to mobile ones. Aside from these issues – which appear less about the phone’s prowess and more about the apps – performance is impressive.

This model is exclusive to T-Mobile and can run on the carrier’s HSPA+ network. Speeds in New York City weren’t terribly fast. We measured an average of 4.81Mbps down and 1.04Mbps up using the my Speed test app.

Call quality is excellent. The people we spoke to said they could hear us clearly, even when standing out on a noisy street. And we were able to hear callers just fine even at low volumes. The speakers are somewhat tinny, but not distractingly so.

The rear-facing, 8-megapixel camera on the Lumia 810 captures good pictures on auto mode that are better than many smartphones we’ve tested but not the very best. We took color images that have noticeable noise even on shots taken outdoors. This isn’t as apparent on the small screen, but is when you transfer to a computer. When taking shots in mixed light and shadow, the 810 doesn’t do much in the way of making everything visible.

This is partially due to the camera app’s few settings. You get scenes and can adjust ISO, exposure and white balance, but nothing more than that. The HDR and fancy anti-shake properties of the Lumia 920 are also absent. Thus, even though the basic images from the HTC One X, Galaxy S3, or the Windows Phone 8X are about on par on first glance, those cameras can take better shots with a bit of tweaking.

The Lumia 810 also features a two-stage hardware shutter button, which is a big plus because it allows for steadier, in-focus shots more often. Tap to focus and tap to shoot are also nice features that we found we preferred when using the camera in portrait mode.

We do like that it’s possible to access other camera apps and filters from inside the on-board one, even if they’re from third-party developers. With filters, the pictures you get are at least good enough for sharing.

The front-facing 1.2-megapixel camera doesn’t offer anything special, but does take decent self-portraits in good light.

The Lumia 810 does a good job of conserving battery life when the screen is off and the phone in sleep mode. However, when the screen is active or the phone is in use, it tends to suck up power quickly. We were able to get through a full day of medium to heavy use – around 9 hours – but at the end of it the battery was nearly spent. This was without the Windows Phone Battery Saver feature turned on and leaving the display brightness on auto.

Despite the less than elegant design, the $150 Nokia Lumia 810 is a good Windows Phone 8 device that offers speedy performance, a nice display, and a decent camera. For a budget phone, it has many great attributes. However, if you’re not a T-Mobile customer, this is not a device that entice you to switch. For $50 ($100 less), you can get the same phone with better design elements on Verizon Wireless or AT&T. Or you can get a better (but bigger) Nokia phone overall for $50 less on AT&T.

Existing T-Mobile customers who want a Windows Phone will appreciate the upgrade in operating system and specs the Lumia 810 offers over the Lumia 710. However, the HTC One S offers better specs at the same price over on the Android side. If you have the budget and want a Windows Phone, HTC’s 8X is only $50 more.

Overall, the Lumia 810 is a good phone hindered by a steep price.

Topics
Video-editing app LumaFusion to get a Galaxy Tab S8 launch
The best phones for kids in 2023
The best iPhone car mounts in 2023: top 10 best ones you can buy
The best grocery list apps for iPhone and Android in 2023
Samsung Galaxy S23: release date, specs, price, rumors, and news
The best fitness trackers in 2023: our 10 favorite picks
Watch the Galaxy S23 Ultra get unboxed a week before launch
The best iPhone apps in 2023: 50+ apps you need to download now
The iPhone 15 Pro’s rumored new design is one I can’t wait for
The best folding phones in 2023: our 6 favorite foldables right now
You can finally take ECGs and track AFib on a Garmin smartwatch
I bought a $50 Apple Watch Ultra clone, and it blew me away
Best cheap phones in 2023: our 5 favorite ones for tight budgets