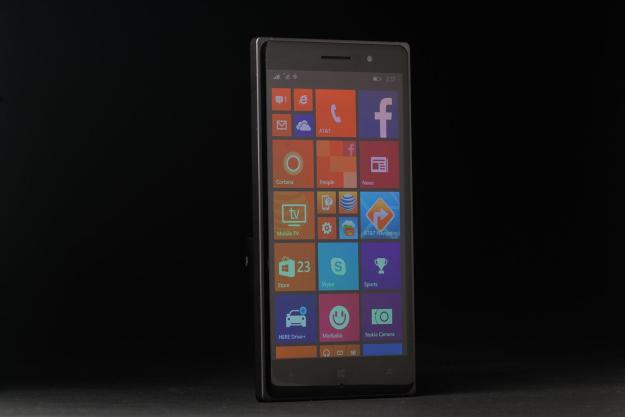 “The Lumia 830 is a great Windows Phone at a reasonable price.”

As recently as four years ago, Nokia was the world’s top cell-phone manufacturer. Yet, the Lumia 830 marks the end of an era: It’s the last Nokia phone ever. All subsequent Lumia devices will be branded by Microsoft, which has now absorbed the Finnish company’s phone division into its smartphone business.

Despite all that, both Nokia and Microsoft are pushing the 830 as an “affordable flagship.” Affordable, because it sacrifices a few things to keep the price of entry attractive, yet still a flagship because it’s one of the top mid-range Windows Phone devices launched in the U.S. this year. We put the phone through its paces to find out if that combination turns out to be a proper swan song for Nokia.

Throughout its history in the phone business, Nokia knew how to make quality hardware, and the Lumia 830 is no exception. The metallic frame fuses together the 5-inch 1,280 x 720 pixel LCD screen on the front, and the plastic back in the rear. The volume, power, and camera shutter button line the right side. Surprisingly, both the headphone jack and Micro USB port are at the top of the device — a curious design choice, considering both tend to be found at the bottom these days.

Like most Windows Phone handsets, especially those in the Lumia line, the general look and feel here is familiar. The screen curves along the edges to blend in with the frame; the three touch-sensitive buttons retain their familiar places at the bottom; and the front-facing camera is in its predictable spot in the top right.

Impossible to miss on the back, the 10-megapixel PureView camera is also a prominent sight with its Carl Zeiss lens and optical image stabilization. Nokia did have to skimp a little bit on the sensor inside, so this isn’t anywhere near the quality of a Lumia 1020 camera.

Take the back off, and you have a removable 2,200mAh battery that is also Qi Wireless-enabled, plus the SIM card and MicroSD slots. The latter can handle up to 128GB, making for significant expansion from the 16GB internal storage out of the box.

Overall, I like the design of the Lumia 830. I’d hesitate to call it premium, but it always felt solid in my hands. With phones getting larger and larger these days, the last Nokia came out just right.

Fortunately, Windows Phone is one of the leanest mobile operating systems around, and runs pretty efficiently.

The Lumia 830 has one of the deepest core camera apps of any smartphone out there.

The Lumia 830 runs on the Windows Phone Denim update, which offers some useful tweaks and features across the board, but is more heavily weighted toward the camera.

Lumia devices have long had the Windows Phone exclusive on Glance Screen, which displays information like the time, weather and (some, not all) notifications while on standby. It’s a lot like the Active Display feature seen in the Moto X, except it doesn’t activate with the simple Jedi-style wave of a hand. By default, it’s in “peek” mode, where a simple tap on the display pops everything up. You can also choose to have it come on at a set interval or stay on all the time, both of which will eat up more of the battery.

The other changes are cosmetic or mostly procedural. Despite the Lumia 830’s shortcomings on paper, swiping around the OS is fluid and painless, with few hiccups and slowdowns to frustrate along the way.

The Windows Store caused a lot of my frustration because its app catalog is an unusual mix of established must-haves and little known options. That dichotomy makes browsing and shopping in it a bit of a slog. Do a search for YouTube and you’ll understand what I mean.

This is a shame, but also a matter of circumstance. Windows Phone is clawing away to gain more users, but only a fraction (less than 5 percent) of smartphone users have ever used it. It’s hard to get app makers to support an OS that few people use.

Cortana is like the girl that shows up late to a party, but carries herself with confidence when she walks in. Microsoft’s voice assistant is comparable to the likes of Siri, Google Now, and the new BlackBerry Assistant, though it’s obvious that the folks in Redmond have some catching up to do.

In the United States, just saying “Hey, Cortana” will wake it up. I found the voice recognition to be pretty accurate, and doing a search query through Bing is easy enough. Cortana always listens for commands to make calls, take notes, set reminders, add calendar entries, read messages or email, and offer traffic information. Like the other voice assistants, there’s work to be done here to improve accuracy and reliability, but Microsoft is on the right course.

I love the camera on the Lumia 1020, and was curious to see whether the Lumia 830 would basically have a pared-down version of it to some degree. PureView was usually tailored to higher-end Lumia phones, so its inclusion here may have something to do with Microsoft and Nokia stamping this an affordable flagship. Sadly, The Lumia 830 can’t outperform the iPhone, though it is a capable shooter and has one of the deepest core camera apps of any smartphone out there.

The phone’s shutter button launches the camera app automatically, even if the phone is locked, which is a great Windows Phone feature. Launching the camera from standby does cause a delay of a few seconds, which cost me a few photo opportunities when I had to snap something quickly. Luckily, the image quality of the shots I did take partly made up for the slow start. The standard Auto mode is the default, though I could pick between a night and sports mode as well.

If I wanted to dig even deeper, there are also pro features for adjusting white balance, ISO, shutter speed, brightness, and manual focus. The smart sequence burst mode is a pretty good bet for snatching a good photo out of a group of bad ones in one snapshot, and holding down the shutter a little longer kicks in 1080p video capture. Again, that delay proves costly.

There were even different software “lenses” to choose from, including the Lumia Selfie and Lumia Cinemagraph. The former is self-explanatory as a selfie mode, and the latter incorporates a way to animate images and export them as GIFs or share via social media.

The optical image stabilization in the lens helps keep shakiness at bay, but the small sensor does struggle in low-light situations. Day or night, indoors or out, the overall results won’t beat out the best handsets on the market, but they are more than competitive against similarly priced rivals.

The rest of the story

Speaking of mid-range, the lower specs actually bring out the best in the 2,200mAh battery, which easily lasted over a full day with moderate usage. One time I kept the Glance Screen on all night and was stunned to wake up and see that it had plenty of life left.

Keep a pair of earbuds or headphones close because the mono speaker in the back of the 830 is one of its weakest links. Lacking bass and noticeably distorting as the volume goes up, it’s simply not good enough for anything more than a brief YouTube clip or as a speakerphone for calls. Of course, few phone speakers are much better.

Call quality itself is good, and I encountered no real issues with it. Again, I’ve heard better in other devices, but it’s not enough to knock the Lumia 830 down a peg in that department.

At $100 on a two-year contract with AT&T, or $450 outright, you don’t necessarily have to break the bank to go in on this one. The Lumia 830 is a solid middle-of-the-road Windows Phone.

The camera’s consistent performance is great, but its specs are as low as a $180 Moto G. Watching Netflix or streaming music may be easy enough, but gaming is a mixed bag. If you’re a stickler for screen resolution and pixel density, then the Lumia 830 will disappoint, but I never felt the display hurt my enjoyment.

Nokia’s legacy isn’t fully represented in the Lumia 830, but it’s certainly an affordable way to hand over the branding reins to Microsoft, who will need a lot more devices like it to get prospective Windows Phone users to adopt its unique platform.