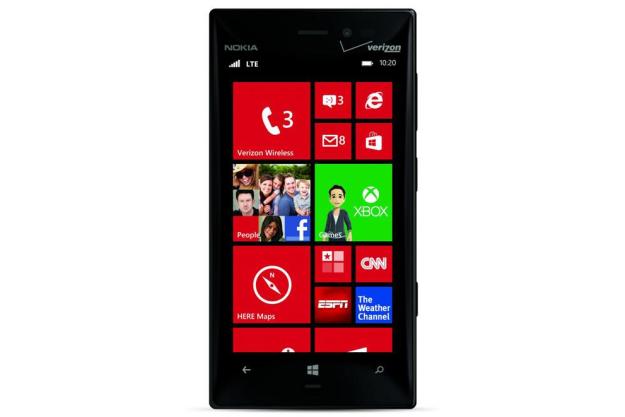 “The Lumia 928 is one of the best Windows Phones. Though it’s hampered by Microsoft’s smaller app ecosystem, at $100, it’s a great buy if you use Verizon.”

It’s difficult to start a Nokia review without noting what an uphill battle the company faces. Once the undisputed king of all things mobile, Nokia has been on a steady fall from grace since the iPhone came out. To stop the bleeding and begin building its place in a post-flipphone world, it boldly aligned itself with Microsoft and its Windows Phone operating system in early 2011. The transition has been … bumpy. The Lumia 928 is Nokia’s 10th phone with Windows. It looks a little different, but shares its guts with Nokia’s flagship Lumia 920.

Verizon has been an especially hostile place for Windows Phones. The 928 is only the second high-end Windows Phone device to ever grace its shelves, making Verizon users especially unfamiliar with Nokia’s offering. If you’re on the big red carrier, you’re probably wondering if you should consider the latest Lumia. The answer is probably more nuanced than you’d like.

It’s impossible to fully recommend any phone. Why, you may ask. Everyone prefers different designs, sizes, colors, button placement, and shapes for their phone. No one has the same size hands, after all. Here are our thoughts on how the Lumia 928 looks and feels compared to the competition.

The first thing you’ll notice about the design of the Lumia is how square it is. Gone are many of the rounded flourishes of the Lumia 920. The 928 is no nonsense. It has a shiny, boxy polycarbonate shell, and like all glossy electronics, it attracts fingerprints. If you’re obsessive compulsive about hand grease, you may want to steer clear (and honestly, avoid all touchscreens). The front is all black and the back and sides are completely white.

As it likes to do, Nokia has put all of the buttons on the 928 on the right side. The Volume rocker sits in a comfortable place toward the top of the phone, with the Power button sitting under it. And at the bottom rests the trusty camera shutter button. Though we’re sure the placement of Volume above Power will bother some of you, we got used to it pretty quick. Since this is a relatively large phone (all phones are, these days), it’s easier to press the navigation buttons – Back, Home, Search – and Power without repositioning the phone in your hand. Repositioning isn’t a huge deal, but every time you have to do it, you open yourself up to the danger of dropping your precious phone and shattering its screen (or worse). The Lumia 928 is easier to grip than many smartphones.

The boxy design means that the corners of the phone will, like other Lumia’s, dig into your palm a little, but it hasn’t bothered us much. Overall, the button placement is second only to Samsung’s phones and more comfortable than even the iPhone 5.

For those wondering, the audio jack, Micro USB charge port, and SIM tray (it takes a Micro SIM), are all located at the top of the phone. Those of you who download a lot of music or videos won’t be happy to hear that there’s no microSD support, but 32GB of onboard memory isn’t bad.

We don’t commonly praise screens, but Nokia pulled out its A game. The Lumia 928 uses an AMOLED screen, which is perfect for Windows Phone because the OS is filled with black and bright colors. AMOLED excels at displaying black (when a pixel is black, it actually shuts off entirely, making it as dark as possible) and bold colors. Thanks to a solid 1280 x 768 pixel resolution, we haven’t noticed AMOLED’s most common weakness: subpixels. On earlier phones, you could sometimes notice small little black dots, which looked like a very fine screen door on your phone. Not so, here.

Nokia has also done a great job improving brightness. Though it’s still tough to read in bright sunlight, the Lumia 928 is comparable to other top phones.

Whether you like the Lumia 928 will, in many ways, be out of Nokia’s control. Though Windows 8 is out, many people are still unfamiliar with Windows Phone, and find it odd to use. For new smartphone users, it will work fine, but those converting from Android or iPhone may have some trouble adjusting. There are big, obvious differences like the replacement of a homescreen of icons with a Start screen full of Live Tiles, but honestly, now that you can resize the tiles on your Start screen, you can do a lot of cool stuff. Windows Phone lets you “Pin” shortcuts to apps and games to your Start screen. These Live Tiles can show how many emails you have, animate, and show a ton of other information. If you’re still confused, here are a few ways we came up with to customize your Start screen.

We’ve also put together a ton of WP8 tips and WP8 problems and bugs for those of you making the leap.

There are other differences, many of them good (People Hub), and others annoying (no notification center). But the big yay or nay for Windows Phone comes down to apps. Though Nokia has included a lot of awesome custom apps for its Lumias like Nokia Maps + Drive (turn-by-turn navigation), Nokia Transit directions, Nokia Music streaming, Nokia Smart Shoot, and even an app that very effectively recommends other good apps.

Nokia is trying really hard, but if you’re an experienced smartphone user on Android or iPhone, the transition will be difficult. Some of your apps will not be present. I use a service called MoviePass and had to quickly put my SIM card back into an iPhone 5 to use the app when I went to the movie theater the other day. Unfortunately, Windows Phone still gets the shaft when it comes to apps. The library is growing and is starting to get pretty robust, but there are many omissions. Games are particularly weak compared to Android and iPhone. Want Instagram? DT’s own Amir Illiafar quit using Windows Phone because it didn’t have it. Change is not for the picky.

Again though, if you’re willing to adjust and try something new, Windows Phone 8 is worth a go.

Nokia’s cameras are always pretty good, but we wouldn’t say it’s market leading. The Lumia 928’s 8.7-megapixel ‘PureView’ camera is competitive, but doesn’t quite match up, on the whole, to the iPhone 5, which we believe is currently the best overall smartphone camera. The Galaxy S4 may edge it out as well.

Nokia’s improved the low-light performance from the 920 and has included a powerful Xenon flash, which should help you in the dark.

The front camera is wide angle and 1.3 megapixel. It’s good for video chats or talking a selfie in a pinch.

Overall, shots are still somewhat grainy and the camera has a tough time managing light and dark areas together. The camera isn’t a reason to purchase or avoid purchasing the Lumia 928.

Benchmarks: Though we can’t run a Quadrant test on the Lumia 928 like we can on Android phones, we would guess it would get around 4,000-5,000. That number likely means nothing to you, but it means it’s about on par with high-end phones of mid-2012. But even that means little. The bottom line is that the Lumia 928 runs apps smoothly and we haven’t encountered any major slowdown. Windows Phone still has more load screens, slower animations, and seems less responsive than newer Android phones and definitely iOS, but the Lumia runs the OS as fast as any device could.

Talk and Data: The talk performance of the Lumia is about on par with other smartphones. Verizon hasn’t yet upgraded to HD Voice, so talk quality is still fairly low. But we haven’t had any troubles hearing or being heard. Verizon’s LTE network has been speedy and speeds have ranged from 5-15Mbps on the download and 4-10Mbps on the upload, which is on par with other devices.

Battery: Nokia has packed a 2,000mAh battery in the 928, which isn’t as massive as the 3,000mAh batteries in the Razr Maxx and some larger phones like the Galaxy Note 2, but seems to be big enough to let the Lumia make it through a day. Unfortunately, the battery is not removable, so if you run out of juice, you’ll need to charge up. Nokia claims that the battery will last 6.3 hours if you’re continuously browsing the Web on LTE and 7 hours if you’re browsing on Wi-Fi. Though we definitely haven’t been on the Web for 7 hours straight, we have used the phone a little more than an average user and have been able to keep a charge for a full day. If you’re in dire trouble, there’s a battery saving mode, too.

The Lumia 928 is only $100 with a two-year contract and comes with a $25 gift card for the Windows Store, for apps, music, or videos. If price is important to you, at $100, it is one of the best buys on Verizon. We also like the Windows Phone 8X by HTC, the LG Spectrum 2, and the Samsung Galaxy S3, but we’d recommend trying a Windows Phone before shelling out for an iPhone 4S or BlackBerry. However, if you’re willing to jump up to $200, it’s tough to recommend buying the Lumia 928 over the iPhone 5, Galaxy Note 2 (if you have big hands), or Samsung Galaxy S4.

Overall, the Lumia 928 is one of, if not the, best Windows Phone’s around. It has a gorgeous screen and Nokia has packed in some great exclusives. It’s only weakness is Windows Phone itself, which still has some oddities and will undoubtedly be missing at least one app that you hold dear. But hey, give it a chance. Unlike Apple and Samsung, Nokia could honestly use your support.

Topics
Video-editing app LumaFusion to get a Galaxy Tab S8 launch
Google Pixel 7a: release date, price, specs, and all other rumors
The Nothing Phone is finally coming to the U.S., and I can’t wait
Update your Google Pixel 7 now for three big security and audio features
OnePlus 11’s controversial design returns in new ‘official’ renders
Today’s best deals: TVs, laptops, iPads, robot vacuums and more
It’s 2022, and customizing my iPhone is still horrible
Best over-the-counter hearing aids for 2022
Save $70 on the Fitbit Versa 4 when you buy it today
My favorite phone of 2022 didn’t come out this year — it’s from 2021
Twitter’s downfall made me look for alternatives, but they just made it worse
Apple Music Sing brings karaoke singalongs to iPhones, Apple TV
How to buy over-the-counter hearing aids