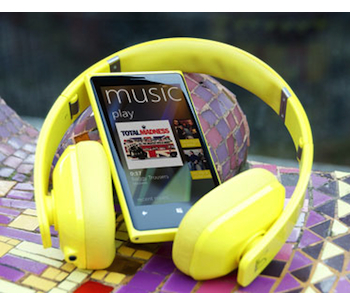 Nokia has taken the fight for supremacy in the online streaming music arena directly to the door of Spotify by launching Nokia Music+, an enhanced version of its free Nokia Music service, complete with new features unlocked by paying a monthly subscription. However, instead of the £10/$14 per month subscription that Spotify charges, Nokia Music+ will cost $4.

This is a very aggressive price point and Nokia knows it, saying in a blog post, “This is for people who care enough about music to pay something for more quality and choice, but don’t want to pay £10 monthly.” Big words indeed, but what’s it offering?

Nokia’s Mix Radio will stay the same, continuing to provide ad-free streaming tunes, online and offline, with the chance to skip a small amount of songs and download a limited amount of playlists. Once you pay that little bit extra though, the world of unlimited track skips, unlimited playlist downloads and higher quality streaming and downloadable music is opened up.

A standalone app will bring Nokia Music+ to your computer and smart TV, as well as what Nokia describes as, “Connected screens,” which we take to mean tablets. This indicates it has an HTML 5 web app ready to go, negating the need to create a separate mobile app for the iPad and Android tablets. Nokia Music is one of several reasons to chose a Lumia Windows Phone, and the introduction of a premium version puts it in direct competition with Microsoft’s own Xbox Music.

Nokia Music+ significantly undercuts the cost of Spotify, which is still without a dedicated Windows Phone 8 app, and with nearly 14 million Lumia phones sold worldwide last year, Nokia has a considerable audience already built-in for Music+, bringing it close to Spotify’s approximately 15 million – 20 million paying subscribers. In the U.S. it will face stiff competition from Pandora though, which also charges $4 to remove adverts from the stream, but it’s likely to take some time before it reaches Pandora’s 67 million active listeners.

If Nokia Music is already available on your Windows Phone, then an app update will provide the option to unlock Nokia Music+ over the coming weeks.