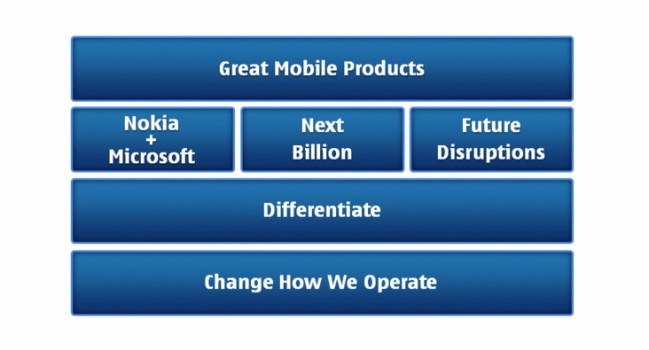 During its second press conference today, Nokia elaborated on a number of points related to the Finnish mobile companies adoption of Microsoft’s Windows Phone 7 platform. Nokia executives, led by CEO Stephen Elop, clarified the roles between the hardware and software companies and several layers of restructuring that will help Nokia achieve this transition. Below are some highlights of the event, separated by topic. For an initial outline of the partnership between MS and Nokia, head here.

Elop clarified Nokia’s view that the smartphone race has shifted from a battle over devices to a war over ecosystems. “We, as a company needed to change our course in order to advance our mission,” said Elop. “Our mission is clear: to build great mobile products.”

Under the “unique” agreement between MS and Nokia, the Finnish company technically could change a large portion of the appearance and inner workings of WP7, but Stephen Elop believes that Nokia’s WP7 devices need to retain the characteristics of the Windows Phone platform in order to push the WP7 ecosystem forward. First and foremost, Nokia wants to help Microsoft push WP7 as a platform and make sure that succeeds so that the ecosystem around the platform continues to grow to challenge iOS and Android.

“Another concern is a loss of control,” said Elop. “From what we’ve established, we’ve taken steps to assure that we have flexibility and a degree of control. This is not your mother’s OEM deal with Microsoft. Microsoft is placing a critical bet on Nokia.”

The newness and low adoption rate of WP7 is of concern to Nokia, but Elop believes that having a strong hardware partner will help Microsoft overcome many of its challenges.

Nokia and Microsoft will each contribute services and technology to one another and co-brand the collaborations. For example, Nokia will integrate with Bing and maybe call it “Nokia search, powered by Bing,” while Microsoft will integrate Nokia’s Maps services into its search engine and maybe call it “Bing Maps, powered by Nokia.” No definitive branding has been established yet.

Bureaucracy between Microsoft and Nokia

Though Nokia will have a deep relationship with Microsoft on the development of WP7, Elop does not believe that the relationship between the two companies will be overly complicated and bog down innovation and time to market. From the ground up, the deal has been constructed so that both companies have differentiated roles in the partnership, explained the CEO. Microsoft is responsible for software; Nokia is responsible for hardware; and the two companies will work on services together. “The whole structure of the arrangement has been done for simplicity,” said Elop.

Advantages: “It is a strong growing ecosystem,” said Elop. “It gives us a rapid way to enter the US market.”

Disadvantages: “We felt that we would be one of many in that ecosystem and somewhat late to the game,” said Elop. “We had to assess our ability to differentiate within the ecosystem. The Google option is a valid option, but frankly at the end of the day it felt a little like giving up.”

Nokia will be splitting standard mobile phones and smartphones into two distinct units at the company and adding end-to-end accountability. Other major changes include the Design team and Services & developer teams now report directly to the CEO, emphasizing Nokia’s commitment to these two areas. In addition, due to the new deal, Navteq (Maps) development will be of greater importance to the company. Finally, taking advantage of patents and IP is becoming increasingly important to Nokia. CEO Stephen Elop sees patents and royalties as an important revenue opportunity. A new leader for North American sales will also be chosen soon.

During its financial portion of the briefing, Nokia’s CFO was blunt: “Simply put, we did not meet our targets. I believe the targets were appropriate at the time, but we did not execute.”

The graph above and others showed how Nokia has fallen behind in a market that is growing rapidly. The company believes Windows Phone 7 and its many restructuring efforts will change that.

Topics
Video-editing app LumaFusion to get a Galaxy Tab S8 launch
Google Pixel 4a vs. Nokia 7.2: Can experience win out?
The $350 Nokia 7.2 is available for pre-order in the U.S.
Motorola One Zoom vs. Nokia 7.2 vs. Google Pixel 3a: Midrange melee
Nokia 7.2 vs. Nokia 7.1: Reset your expectations of what $350 will buy
Yes, we really are completely spoiling the OnePlus 11 and Buds Pro 2 launch
The best rugged smartphones for 2023
The best iPhone games in 2023: 31 games you need to play right now
This Apple leaker just revealed tons of changes for iOS 17 and iPhone 15
Beats Studio 3 headphones are $120 off today at Amazon
How to cheat in Words With Friends
Trading in your iPhone with Apple? You’ll get less than yesterday
The best QR code scanning apps for iPhone and Android in 2023