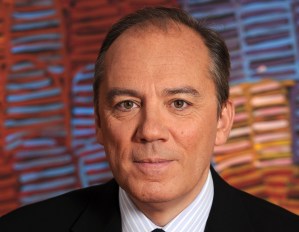 The chief executive of wireless giant France Telecom, Stephane Richard, has revealed in a new interview a number of details about Apple‘s next iPhone, including its smaller, thinner design. Richard also confirms an earlier report that France Telecom, whose Orange brand carries the iPhone in 15 countries, and Apple are working together to develop a smaller SIM card to accommodate the next-gen iPhone’s miniscule size.

“We are going to work with them in order to standardize a new format of SIM which takes into accout our needs with security and authentication and also is compatible with their wishes in terms of size,” Richard told All Things Digital in an exclusive interview. “I understood that the next iPhone would be smaller and thinner and they are definitely seeking some space.”

While Richard had mostly good things to say about Steve Jobs’ Cupertino, California-based operation, the telecom executive criticized Apple’s over-controlling ways when it comes to its app approval process and its effects on people’s access to information.

“Everybody is talking about Net Neutrality,” he said. “Net Neutrality is not only dealing with pipes. It also deals with management of application shops. If you have people like Apple managing their application store and saying ‘This is OK and I don’t want to see this app in my shop,’ it’s a problem.”

Richard’s revelations didn’t stop with Apple and the iPhone. In terms of the recently minted Microsoft-Nokia partnership, the CEO says it “seems difficult” for the two companies to “revers the quite negative trend they have in the market,” but doesn’t rule out the possibility of a rebound.

As far as Research In Motion and its BlackBerry line is concerned, Richard admits that his company “regularly” has problems with RIM’s operating system, as compared to Apple’s iOS or Google’s Android, but asserts that the brand’s prevalence is “not really declining,” at least in Europe. He adds, however, that the company’s most recent devices “had some quality problems,” and that “they really should fix very quickly” the deficiencies in their products.

Video-editing app LumaFusion to get a Galaxy Tab S8 launch
Hive Social is my favorite Twitter alternative, but that’s not saying much
How to set up and use a second line on an iPhone with an eSIM
Should you buy a phone on Black Friday or wait for Cyber Monday?
The Pixel 7 is Google’s iPhone, and it’s my favorite Android phone so far
Sorry, Elon — your Tesla phone is never going to happen
Fitbit Cyber Monday Deals: Save on Sense 2, Charge 5, and Versa 2
Apple Cyber Monday Deals: Apple Watch, AirPods, iPad, MacBook
Get these JBL earbuds and 4 months of Music Unlimited for $25
OnePlus’ new Android update policy matches Samsung, shames Google
How Apple can fix iOS 16’s messy lock screen customization in iOS 17
The best voice-changing apps for Android and iOS
Spotify Wrapped 2022: what it is and how to view it