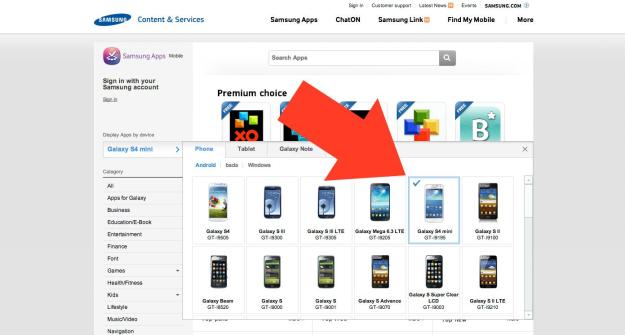 Ever since the launch of Samsung’s flagship Galaxy S4 device exactly a month ago, there’s been increasing chatter about the possibility of the Korean tech company releasing a smaller, cheaper S4 Mini handset too. It followed up the Galaxy S3 with the S3 Mini, after all.

Early Monday saw the clearest evidence yet that Samsung is on the verge of announcing the S4 Mini, with the device turning up on the company’s Content & Services website for UK users. The webpage allows users to easily see which apps are compatible with their particular Samsung device, and sure enough, there’s the S4 Mini, nestled neatly between the Galaxy Mega 6.3 and Galaxy S2.

At the time of writing, the Android phone is shown on the webpage with an image and model number GT-i9195. With no official announcement having come from Samsung regarding the S4 Mini, it seems the listing has been made in error. Click here to see if it’s still up (look for ‘display apps by device’ in the left column).

Easier on the wallet than the S4 and smaller in the pocket (though highly likely inferior in terms of specifications), the expected S4 Mini is rumored to incorporate a 4.3-inch screen, possibly with a 960 x 540 pixel resolution – not a patch on the S4’s 1920 x 1080 resolution but better than the 800 x 480 that comes with the Galaxy S3 Mini.

Other features could include a dual-core processor, 1GB of RAM, an 8-megapixel camera, and storage memory options of 8GB, 16GB or 32GB. A possible microSD card slot will give users even more capacity, should the built-in memory prove insufficient.

With the S4 Mini now showing on Samsung’s own website, can we expect an official announcement from the company this week? We’ll keep you posted….