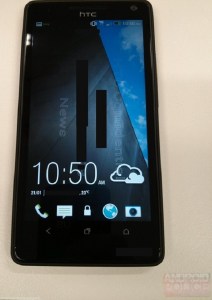 The smartphone industry is no stranger to leaks, but a recent image of what is believed to be HTC’s upcoming M7 handset may top them all. This image differs from other purported photos floating around the Web in that it shows an actual, physical smartphone – not just a computer generated image or mockup.

The photos came courtesy of Android news website Android Police, who posted photos of the HTC device on Tuesday following another slew of allegedly leaked images. The newly published photo depicts a piece of hardware rather than a render, and showcases the M7’s physical features. From the image, we can surmise the form factor of its body, the layout of its home screen, and the placement of widgets and buttons.

While it seems very likely that we’re looking at is in fact the M7, it’s important to remember that this hasn’t been confirmed. Android Police has a fair track record when it comes to purported leaks, but the website does not specify the photos’ origin beyond “a helpful tipster.”

This alleged tipster also supplied a rear image of the device, showing HTC’s logo sprawled across the middle of the body. This fresh photo offers some different nuances than previous mockups – for instance, the placement of the camera’s flash is hanged and the Beats Audio logo is simpler. The handset’s back plate also resembles that of other HTC devices such as the Droid DNA and Windows Phone 8X.

However, these new HTC leaks did more than provide a preview of the phone’s body. Photos of HTC’s new Sense 5.0 interface were also included with the above photos. The purported HTC home screen features a sleeker and completely customizable user interface. Alongside the alleged screenshot is an image of the software information menu, which serves as validation to prove that the image we’re looking at is indeed Sense 5.0.

The forthcoming M7 is projected to be HTC’s flagship smartphone of 2013 and is rumored to feature a 4.7-inch display and a 1.7GHz quad-core processor among other specs. The company is expected to officially unveil the device at next month’s Mobile World Congress in Barcelona, where we’ll learn if this reported leak is correct.