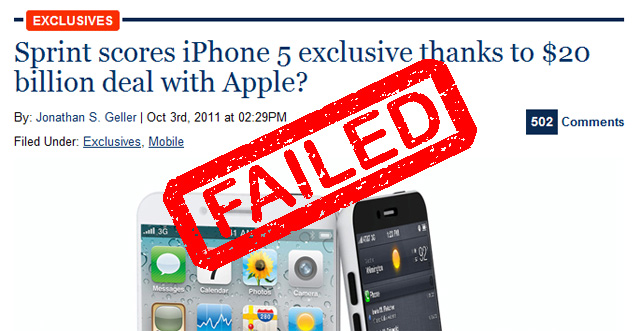 Now that the big announcement has come and gone, some of you out there might feel like little kids the day after Christmas. All of that anticipation and excitement, killed after a 90-some minute conference. Well in lieu of another announcement or surprising you with the iPhone 5, we’ve decided on an exercise in catharsis. We’ve tracked down all of those pesky iRumors that have plagued us for months to try to find out where they came from. Don’t get us wrong: It’s easy to get caught up in the iPhone frenzy, and we were no exception. But here’s a quick recap so maybe this time next year, we can all save overselves from overhype.

Origin: The iPhone fervor began this Summer, in part spurred by the idea that Apple was readying not one but two new models for the late Summer or Fall. And we can in part thank Deutsche Bank analyst Chris Whitmore for that crazed and nonsensical dream. Think about it: Why would Apple release two phones at the same time? The brand’s fan base is such that any release—regardless of timing or any disappointment—will garner incredible sales, and launching two iPhones at the same time means you’re giving consumers a choice between two separate handsets, and they’re most likely to pick one or the other. Apple knows a good thing when it’s got it, and its cycle of upgrades has users buying a new iPhone on a regular basis. Two units would cannibalize each others’ sales.

Regardless, Fortune reported that Whitmore told clients to expect Apple to release an iPhone 5 and 4S. He also mused an unlocked 4S would cost around $349.

Origin: This rumor in particular really captivated us because it was such a huge leap from Apple’s current iPhone 4 (and 4S) design. Now there’s nothing to say that the iPhone 5 will sport this shape, but something tells us this was wishful thinking. It all began when This is my next claimed “a variety of sources” saying the iPhone 5, slated for September, would resemble the iPod touch. The site provided its own mock-up as well, based on drawings the sources had revealed.

Origin: The This is my next mock-up was definitely part of the edge-to-edge glass rumor, but a post on Alibaba featuring a case for something called the “iPhone 5G” also stirred the pot. The image included an iPhone placeholder that sported edge-to-edge glass. Why an Alibaba product listing (which has since been pulled) was enough to add fuel to this particular fire, we’re unsure, but it certainly did.

Origin: Boy Genius Report originally set tongues wagging that Apple was considering eliminating buttons from the next iPhone. Way back in January, the site said one of its “Apple sources” had informed it there was a distinct possibility that future releases would be stripped of the home button. This particular rumor didn’t pick up much steam, but now it looks like we can put it to rest for the upcoming product launch.

Origin: This is quite possibly one of the most fantastic iPhone rumors to date. A mere 24-hours before Tim Cook was to hit the stage, word broke that Sprint had paid Apple $20 billion for 30.5 million iPhone units over the next four years—and that this deal included iPhone 5 exclusivity. Boy Genius Report’s take on it didn’t leave much room for interpretation. “I have been told that Sprint will be getting the iPhone 5—yes the real iPhone 5, not the iPhone 4S—as an exclusive.” BGR also said it would be a 4G WiMax device, but that’s a whole other matter.

Origin: Technically, this one isn’t dead in the water yet—Apple could possibly be working on an iPhone nano. But the rumor mill said that the mini handset would be heading to market this year, something that’s looking more and more unlikely by the minute. A variety of publications, including Bloomberg and the Wall Street Journal, all reported that insiders had briefed them on the inexpensive, smaller lineup, but Cult of Mac and its anonymous source certainly added some steam to the rumor.

The site actually took things a little further, proposing that instead of launching the iPhone 5, Apple was going to launch two models: The iPhone play and the iPhone air. These titles and the mock-up were provided by Cult of Mac, and the site admitted that the ideas were pure speculation and nothing more. Although it also referred back to these predictions when it began talking about an iPhone nano that would be sold alongside the iPhone 4.

Digital Trends also mused that Apple would release a cheaper iPhone. We remained iffy about the existence of an iPhone 4S, and placed on bets on Apple releasing a less expensive iPhone this fall. And we were wrong.

Consider this one pushed firmly to the back burner.

Monster Hunter Rise: How to start the Sunbreak DLC