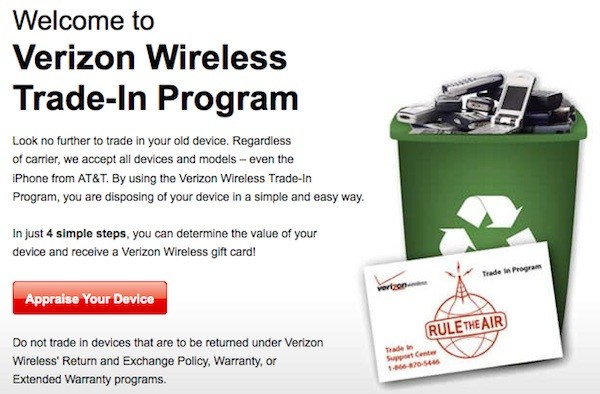 Verizon will reportedly offer customers the option of trading in their AT&T iPhones for credit toward the upcoming Verizon iPhone. According to MacRumors, Verizon sent out an email indicating that current AT&T users could grab a Verizon iPhone 4 by handing over their models. Here’s what AT&T iPhones can get you when Verizon opens its doors to Apple in February:

For anyone planning on ditching AT&T in favor of Verizon anyway, this could make the process a little easier, versus attempting to sell the iPhone yourself. MacRumors thought it was possible the offer was available only to corporate customers, but a Verizon spokesperson told CNET that trade-in options aren’t exclusive. Credit comes in the form of a gift card and can only go toward purchasing an iPhone at full retail price, or toward a future wireless bill. So you won’t necessarily save that much money if you’re trading in your AT&T iPhone for a Verizon version, but you will be able to ditch your previous device easily. That is, only if you aren’t tempted by the promise of Apple bringing back its formerly expelled unlimited data plan.

Video-editing app LumaFusion to get a Galaxy Tab S8 launch
These 80+ apps could be running adware on your iPhone or Android device
Google wants you to know Android apps aren’t just for phones anymore
Nreal’s Air AR glasses head to the U.S., ready to rock with iPhones
How to turn on the haptic keyboard in iOS 16
The best Samsung Galaxy Tab S8 keyboard cases
Apple AirPods Pro 2 vs. Samsung Galaxy Buds 2 Pro
How to add multiple wallpapers and change your home screen on iOS 16
The best touchscreen laptops for 2022
Which $1,000 phone has the better camera — iPhone 14 Pro or Galaxy Z Flip 4?
How to change the time font on your iOS 16 lock screen
How to use iOS 16 photo cutout to cut and paste images
The best selfie apps for iOS and Android