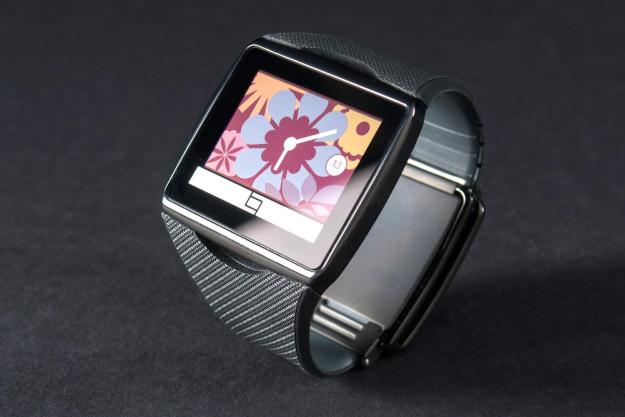 “The TOQ is full of great ideas, but the full package doesn’t come together well, and certainly doesn’t justify its expensive $350 price”

Have you heard? Smartwatches are the new hot thing. They’re so hot, in fact, that Qualcomm is joining in on the fun. And if you haven’t heard of Qualcomm, either, that’s okay, but you’ve been using its products for years. A majority of all smartphones and flip phones run on Qualcomm processors. It’s the Intel of the gadget generation. Now, it’s aiming higher. With the TOQ, Qualcomm hopes to lead by example, and show everyone what a good smartwatch looks like. Sadly, though it has some good qualities, this is not the smartwatch we’ve dreamed of wearing.

Before you ever start using the TOQ, you’re going to have to do something scary: you need to cut part of the band off of your new $350 smartwatch. We avoided this for days because it just seemed wrong. Because the TOQ’s battery is on the clasp of its strap, you have to get a pair of scissors and cut the rubber strap to the circumference of your wrist. If you cut the TOQ’s band too short, you’re done: you just lost $350. But if you play it safe at all, the TOQ will feel loose and wobbly. If you have a particularly thin wrist (like I do), then none of your friends or family will ever be able to use your watch because it won’t fit. There’s no going back from the scissoring.

Connecting the TOQ is a little easier

Like all smartwatches so far, the TOQ relies entirely on your phone to act as its master. It cannot connect to the Internet, or even keep its dates straight (in fact, you can’t even set the date) unless it’s connected to a phone via Bluetooth. We tried to connect the TOQ, but didn’t have any luck until we downloaded its accompanying Android app. Your TOQ is a useless hunk of garbage without this app. We have to admit, the app is nice. It’s easy to select watchfaces, manage notifications, change settings, and toggle interface themes. We have no complaints.

After we used the app, everything worked out fine. iPhone and Windows Phone users, you’re currently out of luck; the TOQ only has an Android app at the moment. We’ll get into the watch and app interface a little later, but first, let’s talk about how you interact with the watch.

Have you imagined a future where buttons aren’t needed and everything charges wirelessly? So has Qualcomm, apparently. The TOQ charges wirelessly (no Micro USB port) using Qualcomm’s WiPower standard and has no buttons on it at all – not even a power button. You can shut the watch off from a menu inside it, but generally it stays on at all times, thanks to its Mirasol display, which has a lot in common with a Kindle ebook reader.

I didn’t mind the TOQ, but it did make me more of a tech slave than I already am.

The screen is touchable, allowing you to swipe and tap between menus, but unlocking the watch is a little odd. You have to tap once on the top of the bottom strap, right under the screen. This turns off the watch face and opens up the menu. It took us a while to get used to this, and to figure out exactly where to tap each time – it can be a little finicky. Need some light? You can turn the front light on by double tapping on the top edge of the wrist strap. Oh, and if you swipe on the silver lining on the bottom of the screen, you can change your watch face. We never figured this out during our testing, but according to Qualcomm’s website, that is how you switch watchfaces. This interface is odd and it takes a long time to get used to it. After a few days, we still found ourselves double tapping where we should be single tapping and not really knowing where or how to navigate the interface. The watch accepts notifications from your phone, but displays them all layered on top of its own interface, so you have to swipe through as many as 40 of them before you can get to its actual menu. Once you get to the menu, it’s pretty simple. The TOQ can only do a few things:

If you’re the type of person that is addicted to looking at your wrist to know the exact time, then maybe you’re the type of person that will enjoy incessantly looking at your wrist to see what new email or notification you got. I didn’t mind the TOQ, but it did make me more of a tech slave than I already am. The big frustration is that though you can get all these notifications, there’s virtually no way to respond to any of them unless you pull out your phone. You can create pre-canned text responses in the TOQ app on your phone, but saying “Yeah” and “Gotcha” will only get a conversation so far. Because there is no microphone or keyboard on the TOQ (not that we want a keyboard), it’s impossible to input text.

Life with a “Game Boy” screen

I showed a number of friends the TOQ, but none of them were as impressed with the device’s Mirasol display as I was. Qualcomm has been pushing Mirasol screens for years, but they haven’t yet taken off. The number one comment I kept getting may explain why. Everyone thought it looked like a Game Boy Advance screen – as in, it had poor color and was washed out. I got this complaint because of the TOQ’s poor frontlight, which has visible bulbs bleeding from the edge and washes the already poor color of the Mirasol screen. Poor front-lighting aside screen technology itself is great for a watch. It blends the great battery efficiency of an E Ink screen on a Kindle with the fast refresh rate of the LCD screen on your watch or tablet. Sadly, it doesn’t look as good as either. Everyone thought the screen looked horrible, which left me wondering if having color was worth this hassle. No one complains about the Pebble’s black and white screen, which is much more hideous than the TOQ. Then again, the Pebble costs $150 and the TOQ is $350. Still, if you set the right theme up (some just look bad) and get used to looking at a Game Boy Advance SP screen again, the TOQ doesn’t do too bad.

The TOQ’s 240mAh battery will last you a few days, but no more. We found it to drain inconsistently, losing little during the day, but dropping 30 percent some nights. Overall, you’re going to want to put it on a charger once every two days, to be safe, which means it isn’t any better than the Galaxy Gear or Sony Smartwatch 2.

Charging the TOQ is as annoying as the Galaxy Gear’s silly cradle. It doesn’t have a Micro USB port, and instead comes with a box that you must set it in. The watch is relatively sleek for a device with a 2-inch screen, but its charging box will take up plenty of room in a purse or bag. If you forget the box, you can kiss your watch goodbye. It won’t charge without it.

Qualcomm’s TOQ has a great app, looks decent (though large) once you put it on, and uses some cutting edge new technology. Sadly, it’s the most expensive smartwatch yet at $350 and mired in inconvenience. You have to use scissors to cut its wristband before wearing it; it requires a special box to charge; the battery only lasts a couple days; the touch controls take getting used to; it’s useless without your phone; and the Mirasol screen doesn’t look as impressive in real life as it does on paper. Like all these early smartwatches, the TOQ isn’t there yet. If you must, buy a Pebble, but we can’t yet recommend the TOQ.