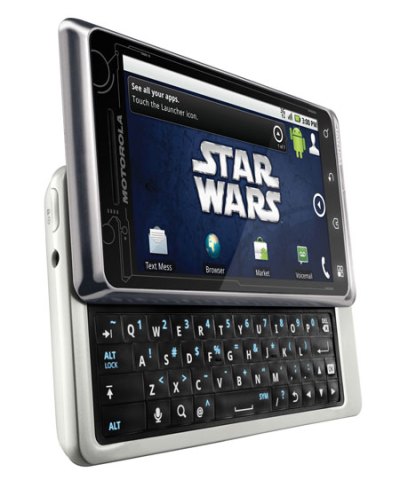 Lucasfilm may have just announced plans to re-release the Star Wars theatrical films in 3D format, but fans who want to hold a bit of the franchise in their hands (and maybe make a phone call or two) will be pleased to know the Motorola Droid R2-D2—basically a Droid 2 in R2-D2 clothing—goes on sale today via Verizon Wireless’s Web site and selected retail locations.

The limited edition phone was announced with the Droid 2 back in August: the phone features a graphic design that helps the phone resemble the iconic robot character, along with custom packaging designed to resemble carbonite—because that way the phone will be safe until it’s thawed out and released by a princess, or something. The phone will come with a Star Wars media dock and stereo headset, along with exclusive Star Wars content, including ringtones and wallpaper, a special clock Widget, a “Best of R2-D2” video, and an exclusive binoculars application.

The Droid R2-D2 will be run $249 after a $100 mail-in rebate with a new two-year service agreement, along with subscribing to plans that total up to $68.98 a month in voice and data service, exclusive of taxes and fees.

Verizon Wireless is also planning to launch an exclusive The Empire Strikes Back app—although it won’t be restricted to just the R2-D2 phone, any Verizon Wireless phone with Android 2.1 or later will be able to grab it for $2.99.