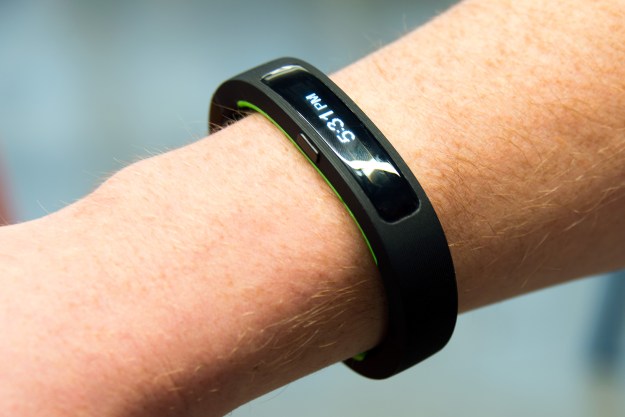 “Razer’s clever Nabu aces the basics with a sleeker design and lower price than its competitors.”

If there’s one thing we’ve learned from watching zombie movies, it’s that successfully escaping the undead is rarely based on speed. Surviving a zombie attack usually means never, ever stopping for anything — not to help an elderly neighbor, or to grab the family dog, or even to investigate the sounds of a baby crying in the far corner of a darkened garage. Keep moving and everything will be OK.

That’s exactly how Razer is pitching its new smart fitness band, the Nabu: Use it, keep moving, and you’ll be fit, aware, and prepared to escape the zombie apocalypse. If you don’t believe us, watch this R-rated, comically violent Nabu video clip and you’ll see exactly we’re talking about.

Razer’s legion of gaming fans have been awaiting the arrival of the Nabu for quite a while now. For the past two years the popular computer gaming accessories company has made big announcements at the Consumer Electronic Show then failed to deliver the product to the mass market. Now it’s finally here, and worth the wait. This cleverly designed band does the basics better than many of its more expensive priced competitors.

Like most Razer products, the Nabu is matte black with high-viz green flourishes on the underside. Whereas Fitbit and Garmin embed their fitness trackers in soft, flexible bands, the Nabu is a solid, stiff techno bangle that looks and feels a lot like the old Nike Fuelband.

The Nabu (not to be confused with its less expensive sibling the Nabu X) features a 128 x 16 OLED display on the underside of the wrist, one button on the band’s top edge, and a interlocking magnetic clasp to lock it on the wrist. The band itself is not adjustable, so the Nabu comes in two sizes: small/medium, and medium/large. The size of the band can be further customized with a smaller interchangeable clasp included with each band.

The brains of the Nabu include a three-axis accelerometer, a vibration engine for alarms and notifications, and Bluetooth for wireless communications with Razer’s free smartphone app (available for Android and iOS). The Nabu and app sync automatically during the day and night, keeping track of fitness basics like steps taken, distance traveled, calories burned, activities, sleep, as well as alerting the wearer to incoming texts, phone calls, and smart notifications. You can also program repeating silent alarms (one of our favorite features), and iOS users can use it to control audio playing on the device, or use the Nabu as a remote shutter button, meaning selfies don’t have to look so much like selfies.

Razer bills the Nabu as a “social wearable.” While it doesn’t allow wearers to compete for steps against their friends, it does allow them to swap Facebook or Twitter info simply by shaking hands with another Nabu wearer. Users can also automatically share metrics on their favorite social-media streams.

The Razer Nabu arrives with the band, a second clasp for sizing customization, and a proprietary USB charging cable.

Opening the Nabu box is its own adventure. Rather than arriving in clear plastic like the Fitbit Flex, the Nabu is presented in a clamshell case that looks more like a jewelry box. On opening the case, the Nabu rests like a bracelet in a recessed loop of the faux velvet. Beneath this is a drawer that pulls out to reveal the Nabu’s documentation, charging cord, and alternate clasp for adjusting the size of the band. The entire enclosure is nearly as over the top as Razer’s Zombie video promo, but it looks good and definitely elevates the Nabu from some of its more pedestrian-looking competitors.

After downloading the free Nabu app, we were directed to “join Razer.” After providing an email address and password, the app got down to the business of personal metrics asking for name, birthday, height, weight, and gender. After that, it was ready to start counting steps.

Thankfully, Razer choose not to completely redesign fitness tracking apps with the Nabu. Anyone who’s used a Fitbit will feel at home in the Nabu app environment. In fact, the two interfaces are nearly identical. For us that’s a good thing. There is no reason to make people learn a whole new system each time they get a new fitness band. The Nabu app sticks to the basics, yet does it in a clear, graphically pleasingly way that made switching easy.

The main dashboard on the Nabu app features a quick glance at the fitness metrics — steps, miles, calories burned, minutes active, and total sleep. Tapping on a metric brings up a more detailed view along with an almost endlessly scrolling daily and weekly historical view. The sleep detail page gives a snapshot overview showing time asleep, restless, awake, or active. Clicking the expand link turns on a detailed landscape view where you can see average sleep patterns from the past day, week, month, three months, or year.

One thing the Nabu is missing is a way to track body weight. The app asked for our weight during sign up, however, there was no way to update that metric along the way or to set a goal weight. Since most people are interested in their fitness tracking as a way of losing or controlling their weight, this seemed like an odd thing to leave out.

The Nabu is a solid, stiff techno bangle that looks and feels a lot like the old Nike Fuelband.

The Nabu is designed to be worn upside down, meaning you need to twist your wrist palm up every time you want to check the time or read an incoming text. While it was strange at first, we came to like it. The screen automatically lights up with the twist of the wrist, or with an incoming call, text, or smart notification vibration. And when we wanted to ignore a notification we weren’t in danger of any shoulder hoppers catching a glimpse at who was calling or what the text was about. In an office setting, info security can be key, and the Nabu keeps it all on the downlow. The OLED screen was great indoors, and readable outdoors, however, we did have to lean it into the shade under direct sunlight.

In weeks of wearing the Nabu, the only time we encountered trouble with it was while sleeping. Because the band is stiff, we ended up taking it off before going to bed most nights, which ended up being a great opportunity to put the Nabu on the charger – it gets about six days between charges.

We like fitness bands as much for the smart notifications as for the metric tracking. If we can get vibration alerts on the wrist while counting some steps along the way, we’re happy. The Nabu does all that, plus adds remote music and shutter button control for iOS devices. All this functionality for $100 makes the Nabu one of the best values in the smartband market. And hey, if it can help us all stay one step ahead of the flesh-eating zombies hordes, even better.