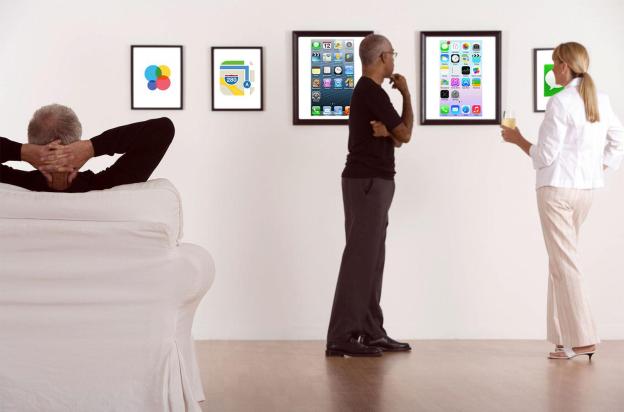 In the world of smartphones, nothing stands still for long – not even the look of the virtual buttons we swipe and press. In the last year, Samsung, HTC, BlackBerry, LG, Google, and Firefox have introduced brand new user interfaces. They’ve generated some buzz, but most critics focused more on new features than the aesthetics of the new menus and icons.

Yet the moment Apple changed things up with iOS 7 last week, all hell broke loose.

Everyone on the Internet has become a design expert, picking apart the OS on a granular level. From color schemes to gradients and the size of icons, no one seems content with Jony Ive’s revamp of iOS. What the hell, guys? Did everyone lose the ability to see the big picture? I didn’t realize that all tech journalists double majored in iconography.

Joshua Topolsky of The Verge kicked things off right after Apple debuted the new OS. He called it “simply confusing.” Some of his more entertaining criticisms are of the Messages icon, which has a word balloon that is “so puffed up and oversized compared to its fine point that it looks like it will topple over.” All the icons are a mess, he complains, specifically citing the “inconsistency” of the camera app from the lock screen to the home screen … though failing to acknowledge that the same inconsistency exists in iOS 6.

If I’m accusing Topolsky of being nitpicky, then I don’t know what to say about Network World. Writer Yoni Heisler goes icon by icon, app by app through Apple’s new OS, criticizing every single icon. The Newsstand icon looks “generic;” the Calculator icon is too flat; the Game Center icon isn’t flat enough; the photos icon has colors that are “too muted.” He’s meanest to the poor Maps icon though:

“The iOS 6 icon, with a touch of gloss and 3D perspective, is aesthetically pleasing. Contrast that to the new Maps icon where Apple, yet again, went with a putrid shade of yellow and utterly lifeless shades of blue and green,” writes Heisler.

For your reference, here are the two Map apps.

Does the icon on the bottom upset you? Does it make your blood boil? If it does, please get a hobby. No one outside of Apple should have the time or energy to get upset about the design differences between these icons. At least Cult of Mac has a sense of humor about the change.

Gizmodo is getting in on the nitpicking game, too. In “What’s Wrong With the iOS 7 Icons,” writer Ian Storm Taylor (who actually is a designer) picks apart Apple’s icons one by one, explaining precisely why he hates them. His criticisms go beyond mere ranting, but his suggestions, like the Squarespace icon below, look worse to my eyes. Maybe you have to be a designer to appreciate them?

Throughout the article, Taylor criticizes Apple for continuing to rely on skeumorphism and failing to deliver a “consistent” set of app icons. He microexamines each icon, going so far as to demand the removal of a yellow dot on the camera icon. Seriously?

TechCrunch posted a Dribble.com artist’s interpretation of what he wished the iOS 7 app icons looked like, which illustrates the triviality of all this. If you can’t tell, his is on the left. Is this much of a change what we’re upset about? He removed a few details and made logos smaller. That’s it.

Does anyone honestly think that a normal person is going to walk into a store and choose an Android phone because the icons of iOS don’t seem cohesive enough? No, they are not.

Even people who do hate Apple’s new icons shouldn’t care because most of us don’t even use them. We use other apps – dozens of them. It’s impossible to keep iOS icons consistent unless Apple VP of Design Jony Ive plans to redesign a million App Store icons. Apple can rejigger all of its dozen or so icons, but after that, the look and feel of the iOS home screen is out of its control. There are more than 900,000 other apps in the App Store and few of them have icons that will “cohesively” fit with whatever work of art we want to pretend iOS 7 should be.

We can rip apart the icons and design decisions of iOS 7 all we want, but does anyone believe that iOS 6 is a monument to visual design? Its glossy menus look like they’re straight out of 2001 (because they are) and it’s full of weird oddities.

Are we content just sticking with the same exact iOS design for another six years? There’s nothing terrible about it, but it is aging. Apple has a real problem. If it doesn’t “look” new, then it will look old. And there’s nothing worse than appearing old in the mobile phone market. It’s a death sentence. Ask BlackBerry. Ask Nokia.

But hey, none of this matters. If iOS 7 looks unfinished that’s because it is unfinished. This is a beta. The final design will likely look different.

And even if this is iOS 7, it looks pretty good. No one is going to care about the iconography. iOS 7 looks fresh and different from the last six years of iPhones. That matters. When people go into a store to buy a new phone, iOS 7 will surprise them. That matters. When regular people compare the next iPhone to the Galaxy S4 or HTC One, it will look just as new. DT readers, you probably already know what phone you will buy next. But we’re not the majority. Most people buy what seems best when they get to the phone store.

I enjoy over-discussing meaningless tech topics in excruciating detail as much as the next guy, but the skeptics dissected every nuanced “mistake” in iOS 7 need to give it a rest. The success of the next iPhone will have absolutely nothing to do with the colors or gradient style of the default icons on its home screen. There are plenty of things that I hope Apple fixes by the time iOS 7 rolls out in September or October, but I’m not going to spend the summer yelling at Jony Ive because he had the guts to mix things up

iOS has never been a holy grail for user interface style and icon design. Let’s not pretend it is.