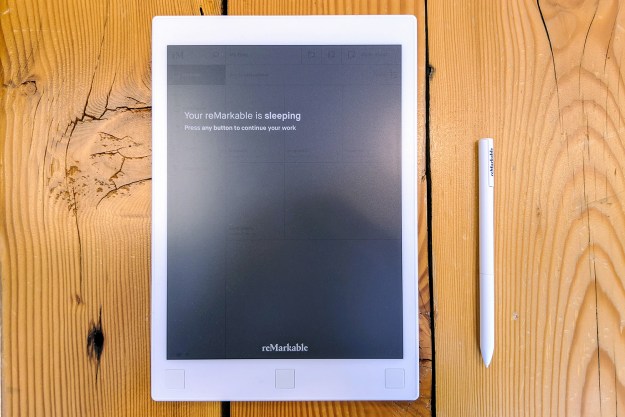 A low-power, no-frills tablet that mimics the look and feel of real paper sounds almost too good to be true, but that’s startup ReMarkable’s sales pitch. The eponymous ReMarkable tablet’s custom-designed screen lets you doodle, sketch, and write just like the Microsoft Surface Pro or Apple iPad Pro. But unlike most other stylus-touting tablets on the market, the ReMarkable doesn’t suffer from screen glare, lasts days without needing to recharge, and syncs seamlessly with your PC and phone — in theory, that is.

After spending a little more than two weeks with the ReMarkable tablet, we can confidently say that it’s the foundation for something great. But like any first-generation technology, not everything about the ReMarkable tablet is as well-executed — or remarkable — as it could be.

The ReMarkable is a little larger than the picture on the box lets on, but it’s also surprisingly lightweight.

That makes it really portable. I took to carrying it around one-handed and balancing it on my lap like a legal notepad, as well as stowing it between books on my desk. It’s thin enough to squeeze in a crowded book bag or backpack, but I can’t attest to its durability — the ReMarkable’s exposed screen made me a little wary of trying.

In terms of aesthetics, the ReMarkable tablet keeps it simple. It has a shiny, silver-brushed backplate, with white plastic trim that stretches the length and width of the tablet’s screen. An oblong button on the top switches between the tablet’s sleep modes and powers it on and off, while three (slightly wobbly) square-shaped buttons on the front handle basic software navigation.

It’s not quite like paper, but there’s resistance and texture akin to a really thin sheet of notebook paper.

But the true innovation is the screen. ReMarkable calls it a Canvas display, and if you’ve ever used a Kindle ebook reader, you’ll recognize it right away. The technology is called E Ink Carta, and it produces a picture by electrifying microscopic particles roughly the width of a human hair.

E Ink screens are generally less prone to glare than traditional liquid crystal displays and much more power-efficient, but pose a challenge for touchscreen tablets like the ReMarkable because of their low refresh rate. That’s where the ReMarkable is different.

Most E Ink screens take 100 milliseconds to refresh completely, which is fast enough for flipping pages in an ebook but too slow for real-time sketching and note-taking. ReMarkable’s 1,872-by-1,404-pixel (226 dots per inch) Canvas display, in contrast, achieves a 55 millisecond response time.

So how does writing on the ReMarkable tablet actually feel? It’s not quite like paper, but there’s resistance and texture akin to a really thin sheet of notebook paper. That’s thanks in part to the ReMarkable tablet’s felt-tipped stylus, which has a marker tip custom-designed to mimic the feel of paper. (ReMarkable says it has more than 2,048 levels of pressure sensitivity and 512 levels of tilt.)

The felt tips don’t last forever, though. ReMarkable sells replacement kits in packs of 10 for an undisclosed price, but warns that they could degrade in as little as six months. We didn’t notice any serious wear after two weeks of light use, but it’ll depend on how aggressively you sketch.

The pen’s stellar performance stands in contrast to the rest of the experience, unfortunately.

The ReMarkable tablet suffers from the telltale limitations of E Ink technology: Tapping on a menu key or scroll wheel basically guarantees a delay and screen flashes while the tablet refreshes. It doesn’t come close to the responsiveness of the stylus, and it’s incredibly frustrating.

The ReMarkable tablet’s battery life is a little better than its performance, but it didn’t last as long as I’d like. After a typical 9-to-5 day of jotting down reminders, organizing my to-do list, and absent-mindedly doodling, I could count on the 3,000mAh battery dipping well below 40 percent by midweek.

ReMarkable’s engineers say they’re targeting two weeks of standby time, which seems a little optimistic. But we’ll have to take their word for it.

Sketching on the ReMarkable takes place mostly in Notebook, the tablet’s catchall for quick notes and doodles. In the default view, you get a nearly unlimited number of pages and a vast array of drawing tools.

I found the ReMarkable’s basic tools to be the most useful.

The left-hand side is where you’ll find different stylus types: A pencil, a pen, a brush, and a highlighter. Tap on one, and sub-menus for stroke thickness and color appear in the top-left corner. (You can choose between a ballpoint pen and a marker, for example, and a sharp pencil or a tilted pencil.) Other tools include the eraser, which lets you delete portions of drawings or the entire page; the magnifying glass, which lets you zoom in or out of the page; and a “minimalist” mode that hides the toolbars from view.

On a day-to-day basis, I found the ReMarkable’s basic tools to be the most useful. The built-in move button saved me the trouble of having to erase and rewrite things I’d written, and the undo button made getting rid of mistakes as easy as the press of a button.

For folks more artistically inclined than myself, ReMarkable’s notebook is chock-full of drawing aids. A Photoshop-like layering tool lets you add, remove, edit, and switch between backgrounds and foregrounds, and a gallery of templates provides premeasured grids and lines for sheet music, weekly schedules, and more. (ReMarkable says that users will eventually be able to create their own templates.)

Those features tie into the ReMarkable tablet’s companion app for Android, iOS, and PC. When the tablet is connected to Wi-Fi, notebook pages sync automatically each time you make a change. Each app has a built-in viewer, and a handy export tool that lets you convert any sketchbook page into a PDF document or PNG image.

They work well enough, but documents didn’t always sync right away in our testing. There’s also an absence of support for third-party storage services like Dropbox and Google Drive (ReMarkable says it’s working on this). And we couldn’t get Live View, one of the ReMarkable tablet’s most promising cross-platform features, working properly. It’s supposed to show sketches on the PC or mobile app in real time, but neither the Android app nor the PC app acknowledged Live View when we enabled it on the tablet. (ReMarkable says it’s aware of the bug.)

ReMarkable’s crowdfunding campaign ended in August, but ReMarkable says it’ll open its store for pre-orders later this year ahead of a spring 2018 release window. Those who pre-ordered earlier this year will get the ReMarkable in September 2017.

The ReMarkable tablet and stylus will cost $600. It comes with a folio cover, a USB cable, and 10 pen tips.

ReMarkable offers a limited one-year warranty that protects against manufacturing defects. If there’s anything wrong with the tablet upon delivery, it’ll offer a repair and/or replacement at no charge.

The warranty doesn’t cover wear and tear, accidental damage, or “improper” modifications like reengineering or software modifications. In other words: If you drop the ReMarkable tablet on a hardwood floor, you’re liable for the damage.

The ReMarkable tablet delivers on its promise of imitating pen and paper, but at a premium most people won’t be happy paying.

It depends on whether you’re willing to settle.

The ReMarkable tablet is the closest thing we’ve tried to paper, and its E Ink screen has a theoretical advantage when it comes to battery life. But as it stands, more conventional tablets are the better buy.

For $700 (plus the price of the Apple Pencil), Apple’s iPad Pro 10.5 puts a wider array of drawing, note-taking, and general-purpose apps at your fingertips. And the $800 entry-level Surface Pro, while a little on the pricey side, runs full-blown Windows 10 and the millions of applications it supports.

The ReMarkable tablet’s future is a bit murky. The eponymous company behind it doesn’t have a proven track record.

But the company is already planning software updates. ReMarkable has working prototypes of a handwriting recognition system that transcribes notes to written text, and it intends to enable live sharing of notes through web links in the first half of 2018. In late 2017, the company tells Digital Trends, it will begin development on a web app for notebook pages and a plug-in for apps like OneNote and Evernote.

It remains to be seen if ReMarkable will follow through on those promises, of course. But given its transparency with crowdfunding backers so far and its detailed support webpage, we’re inclined to believe that the ReMarkable tablet will last well past its launch date.

The ReMarkable is a great idea that’s in need of refinement.

There’s no disputing its technological achievement. Simply put, there’s nothing on the market like the ReMarkable’s Canvas display.

But that’s not enough to justify the $600 asking price. ReMarkable pitches the tablet as a “distraction-free” alternative to the iPad and Surface Pro, but it’s almost a moot point. If you’re willing to pony up a few extra dollars, you can pick up a much more capable tablet that might not feel like paper, but offers a much more robust ecosystem.

That’s not to mention the ReMarkable tablet’s worrisome number of bugs and missing features. There’s no way to annotate existing documents or search the content of notes, for example. And features like USB file transfer remain inexplicably in “beta.”

Perhaps a future, cheaper version of the ReMarkable tablet will live up to all of its promises. But this one doesn’t.