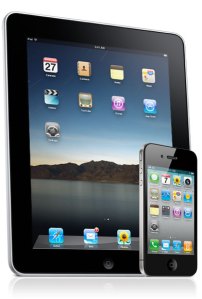 Apple is working to bring near-field communication (NFC) technology to both the next-generation iPad and iPhone, Richard Doherty, director of consulting firm Envisioneering Group, told Bloomberg. Doherty, in turn, cited “engineers who are working on hardware for the Apple project” as the source for the information. The inclusion of embedded NFC hardware would allow users to send and receive data from their iPhones and iPads to terminals at distances of up to 4 inches.

NFC has a variety of potential uses, but Apple appears to be most interested in NFC’s ability to function as a mobile payment system, or “e-wallet.” “Apple’s service may be able to tap into user information already on file, including credit-card numbers, iTunes gift-card balance and bank data,” according to a financial adviser cited in Bloomberg‘s report.

NFC represents a potentially simpler way for customer’s to make real-world transactions, but it could also be a boon to retailers. By encouraging users to link their devices to bank accounts directly — and not their credit cards — retailers may save money they would have otherwise spent on credit and debit card fees.

Apple may also use data about customer’s NFC purchases to sell targeted ads based on where users are spending money. “NFC would let Apple’s iAd advertising network personalize ads to the places where a customer is spending money. That could double or triple the ad rates that Apple charges, ” according to a financial adviser cited in the Bloomberg report.

Apple already has developed a prototype of an NFC mobile payment system, according to Doherty. And the company may consider subsidizing NFC terminals, or even giving away the technology to retailers, to promote rapid adoption of NFC and encourage sales of NFC-ready iPads and iPhones.

If what we’re hearing is true, we may see Apple’s mobile payment system appearing in retail stores as early as mid-2011.

Topics
Video-editing app LumaFusion to get a Galaxy Tab S8 launch
Best Apple Deals: Save on AirPods, iPads, MacBooks and more
How to sync your Outlook calendar with an iPhone
A foldable iPad in 2024? This Apple insider is ‘positive’ it’s happening
iPhone’s Crash Detection is still firing off false calls
The best Samsung Galaxy S23 Plus screen protectors: 7 great choices
The Galaxy S23 secretly beats the iPhone in a very important way
This exclusive Snapdragon chip supercharges the Galaxy S23 in 4 big ways
All of Samsung’s videos from today’s Galaxy Unpacked event
The best USB-C cables for 2023
Is the Samsung Galaxy S23 waterproof? What the IP rating means
Does the Samsung Galaxy S23 have an SD card slot? Know this before buying
Samsung Galaxy S23 vs. Galaxy S23 Plus: a tough choice to make