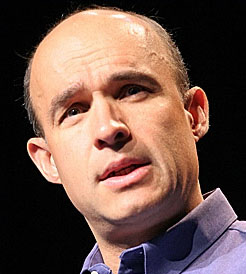 “Apple’s claims about RIM products appear to be deliberate attempts to distort the public’s understanding of an antenna design issue and to deflect attention from Apple’s difficult situation.”

Since the June 24 launch of the iPhone 4, some users have reported drastically reduced signal strength when they held the touch-screen phone a certain way, leading to dropped calls.

At a rare, 90-minute press conference, Jobs maintained there were no problems with the iPhone 4’s wraparound antenna design and accused the media of trying to “tear down” a company that had grown so successful.

“This is life in the smartphone world. Phones aren’t perfect. Most every smartphone we tested behaved like this,” Jobs said.

“RIM has avoided designs like the one Apple used in the iPhone 4 and instead has used innovative designs which reduce the risk for dropped calls, especially in areas of lower coverage,” they said.

“One thing is for certain, RIM’s customers don’t need to use a case for their BlackBerry smartphone to maintain proper connectivity,” the statement said.

RIM, based in Waterloo, Ontario, was referring to Jobs’ offer to provide iPhone 4 users with free phone cases to address the reception complaints.

Apple, based in Cupertino, California, could not be reached immediately to comment.

Video-editing app LumaFusion to get a Galaxy Tab S8 launch
Best Apple deals and sales for September 2022
The iPhone 14’s car crash detection might be a little too good
Have a Fitbit? You’ll soon be forced to link a Google account
The iPhone 14 gets a stunning transparent back with this new mod
Best cheap Fitbit deals for September 2022
The Uber hack is an outrageous tale of a teen hacking for fun
The best Samsung Galaxy S22 screen protectors for 2022
LG’s doomed Rollable phone appears on video to show us what we missed
How to transfer your SIM and phone number to an iPhone 14
Amazon’s new Fire HD 8 tablets run faster, last longer, and start at $100
Samsung Galaxy S22 buying guide: everything you need to know
Watch the iPhone 14’s car crash detection get put to the test