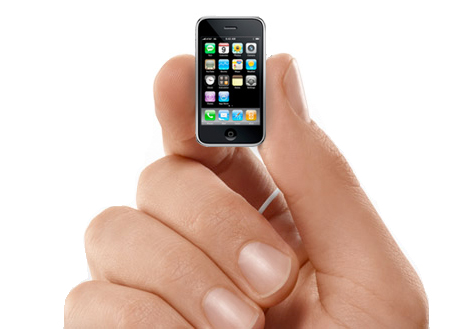 “According to people who have been briefed on the plans,” Apple is developing new, less expensive iPhone models to compete with lower level smartphones. In a move to compete with the rapidly expanding Android market, which integrates on smartphones of various makes and prices, Apple will market a cheaper, smaller version – about one-third smaller than the existing iPhone 4.

Bloomberg claims one of its sources has seen the prototype, and that it will sell for $200 without a contract – as opposed to the iPhone 4, which currently sells for between $200 and $300 with a two year AT&T or Verizon contract.  Apple will be able to cut the price tag so drastically because it will use the same or similar hardware as the iPhone 4, and component prices drop over time, so the phone would be significantly cheaper to manufacture.

According to the insiders, Apple is concerned with fending off Android competition as the Google platform continues to rapidly grow and establish itself as a force to be reckoned with. By even minimally widening its customer demographic, Apple could see monumental sales growth, and the device could be introduced mid-year. But, seeing as no Apple product is a certainty until sitting it’s sitting in the palm of your hand, we wouldn’t mark your calendars.

In addition to a low-level phone, Apple is reportedly developing a “dual-mode” phone, which could be supported by GSM (used by AT&T) and CDMA (used by Verizon) networks. Apparently this is to eliminate the use of SIM cards, something else Apple is working on. According to multiple outlets, including Bloomberg, Apple is investing in a “universal SIM,” which would get rid of the cards entirely and let iPhones operate on different networks. Obviously, this would allow Apple to exist free of carriers and control its customers more directly.

Eliminating SIM cards and carrier-led contracts seems like a lofty goal, even for Apple. But we are interested to see what could become of these more affordable versions. If these versions truly cost Apple next to nothing to produce, they could equate to a whole new demographic that will have access to iOS phones, and more money in Apple’s pocket.