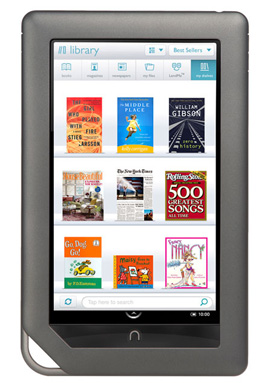 As we reported earlier in the week, Barnes & Noble has been doing pretty well with sales of its Nook Color e-reader and related digital content.

And now there are reports that the book giant is about to launch Nook Color 2, possibly before the month is out.

Taiwanese trade publication DigiTimes said that, according to industry sources, “Taiwanese suppliers will ship key components to be used in Barnes & Noble’s Nook Color 2, scheduled for release in September 2011,” and that the device will sport a 7-inch full color touchscreen.

The DigiTimes article also says that the upgraded Nook Color 2 will compete directly against Amazon’s Kindle – and by that we can assume it’s referring to Amazon’s upcoming tablet, news of which emerged on Friday. And in case you haven’t already heard, it’s thought the new Amazon tablet is going to be called the Kindle (hmm….wonder how long it took them to come up with that name).

Amazon’s device, like the Nook Color, is believed to feature a 7-inch color touchscreen and be priced at $250. And both will run the Android OS – although according to a TechCrunch report by MG Siegler, who claims to have recently handled Amazon’s new device, the Kindle’s Android OS “looks nothing like the Android you’re used to seeing.”

This is all going to make for a fascinating couple of months in the e-reader/tablet market. Barnes & Noble will be hoping the new Kindle tablet doesn’t blow the latest version of the Nook Color out of the water. It could be a tense few weeks at the company’s New York HQ as they wait to see exactly what Amazon brings to the table. But then again, Amazon execs don’t know what the Nook Color 2 is going to feature yet, either.

How to share Kindle books with family and friends