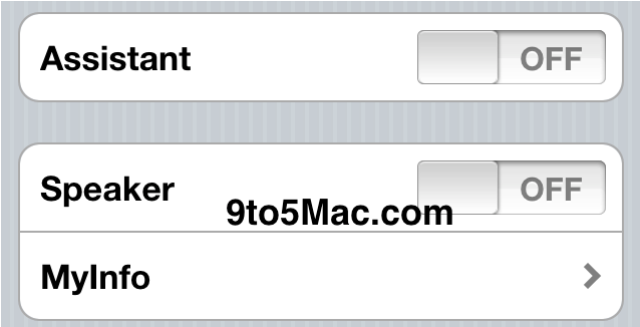 iPhone 5 mania is beginning to reach a fever pitch as the rumored September launch date draws nearer. Of course, most of the hype continues to revolve around the timing of its release rather than the handset itself. Thankfully, a new report gives us a look at what would be a pretty significant upgrade to the next-gen model.

9to5 Mac claims that Apple wants to outfit the iPhone 5 with voice control. Using technology acquired in its purchase of Siri and partnership with Nuance, the smartphone will include a native voice command application called Assistant. Apparently Assistant will be an iOS 5 feature but come packaged with the iPhone 5 introduction to drive more attention to the phone – as if that were necessary. But if this is the case, older handset users will be able to use the new function as well.

Assistant would function similarly to the Siri iPhone app, which takes you voice command and finds what you need based on information it securely curates (most specifically your location). If you want to get a taste of Assistant, download the Siri app (free) and give it a spin. Unlike Siri, Assistant would of course be fully integrated into iOS 5 which means it would have fewer limitations accessing iPhone data and requests would be nearly unlimited. It will also reportedly be able to respond to the users’ commands.

If Assistant turns out to be everything we’re hearing, it would be an incredibly impressive feature to package with iOS 5, as well as with the iPhone 5. The iPhone already functions as a personal aid for most owners, and is used for planning, navigating, and discovery. Freeing up your hands and eyes and still be able to put the iPhone through its paces would be a welcomed step forward.

Before you get too excited though, we should tell you it’s possible Assistant will still be in development when the iPhone 5 ships. Apple is likely to want such a feature to be nearly perfect before it hits handsets – and fingers crossed, that’s not too far out.

Video-editing app LumaFusion to get a Galaxy Tab S8 launch
My favorite phone of 2022 didn’t come out this year — it’s from 2021
It’s 2022, and customizing my iPhone is still horrible
Today’s best deals: TVs, laptops, iPads, robot vacuums and more
The Nothing Phone is finally coming to the U.S., and I can’t wait
The best Android games available right now (December 2022)
The most innovative tech products of 2022
How to unlock a phone on every carrier in 2022
This ridiculous smartwatch has a hidden pair of earbuds inside
This retro battery pack is way cooler than it has any right to be
Apple Health vs. Samsung Health? What I learned after using both
Samsung Galaxy S23: release date, specs, price, and all other rumors
4 tech collabs we want to see on the OnePlus Featuring co-creation platform