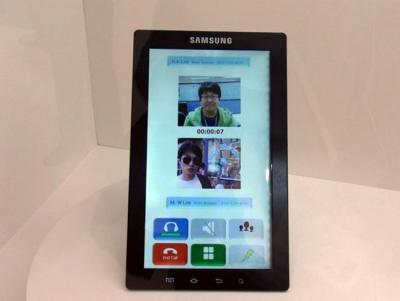 According to Pocket Lint, the upgraded Galaxy Tab will be slightly smaller than the iPad with a larger display. It’s also rumored to come with a dual-core Qualcomm processor, but in lieu of Samsung’s own Exynos chips that they themselves built, we doubt it will sport a competitor’s hardware. Samsung has invested a lot of time and money into CPU production, so we’re suspicious of the idea that it’d go with Qualcomm. There aren’t any other specs known at the moment, except that the tablet will feature an 8-megapixel camera.

The Galaxy Tab 2 is rumored to be introduced this Sunday, and would be the first device to directly compete with Motorola’s Xoom, currently the only product packaged with Honeycomb–Android’s tablet-optimized OS. We heard about the appearance of a 10.1-inch Galaxy Tab back in November, but nothing has surfaced since. We’ll let you know Sunday right before MWC officially kicks off.