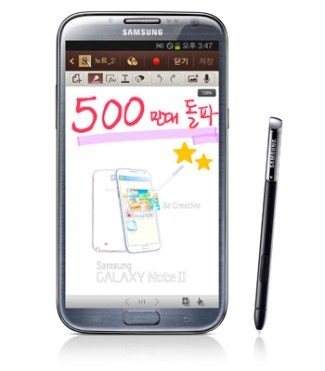 Sales of Samsung’s Galaxy Note 2 have reportedly crossed the million threshold in its home country of South Korea. The so-called phablet has been received well by consumers everywhere, with Samsung announcing late November that it had sold five million units worldwide.

At the current rate, it shouldn’t be too long before the tech giant reaches the ten million milestone. The device first went on sale in September 2012, following the success of its predecessor which launched in the second half of 2011.

Samsung told South Korea’s MK Business News that the device’s continued popularity among consumers was thanks to the wide variety of available apps as well as improved S-pen functionality.

There was talk in the middle of last month that Samsung was prepping the third iteration of the device, featuring a whopping great (“whopping great” for a phone, at least) 6.3-inch-display.

Even more recently it was suggested that a 7-inch Galaxy Note might even be in the works, though no official word has come from Samsung on the matter.

Heading into 2013, the electronics company said it’s aiming to sell a colossal 510 million handsets worldwide this year – 390 million smartphones and 120 million feature and budget phones. To achieve this, it hopes to make a bigger impact in developing nations with a wider range of attractively priced devices.

Topics
Video-editing app LumaFusion to get a Galaxy Tab S8 launch
The best folding phones in 2023: our 6 favorite foldables right now
Watch the Galaxy S23 Ultra get unboxed a week before launch
Is the Samsung Galaxy A14 5G waterproof?
The best small phones for 2023
3 reasons you should buy the Google Pixel Watch today
The Galaxy Z Fold 4 isn’t just a good phone — it’s also my favorite computer
This is the OnePlus Pad — the OnePlus tablet we’ve waited years for
My iPhone 14 Pro camera is ruined, and it’s all Apple’s fault
Samsung Galaxy S23: release date, specs, price, rumors, and news
Best Fitbit in 2023: 6 best watches and trackers
The best grocery list apps for iPhone and Android in 2023
The best iPhone car mounts in 2023: top 10 best ones you can buy