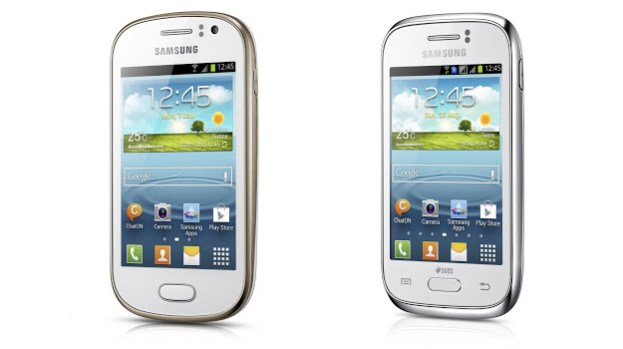 Samsung has announced a pair of new Galaxy smartphones, both of which come in either single-SIM or dual-SIM configurations. As is often the way with devices such as these, they’re aimed at the lower-end of the market and will most likely find their homes in emerging markets.

We’re talking about the Samsung Galaxy Young and the Galaxy Fame, names which if you’ve been reading our guide to what to expect at Mobile World Congress (where the Fame was also leaked as the Frame) will be familiar to you. That’s right, there goes another couple of phones which could have made their debut at the Barcelona show, indicating again Samsung may not have much left to reveal.

Anyway, here’s what the two new phones are all about. We’ll start by looking at the Galaxy Young (pictured on the right), which as the name suggests would be perfect for a first smartphone. Its basic feature set includes a 3.27-inch screen with a 320 x 480 pixel resolution, a single-core 1GHz processor and a 3-megapixel camera. Google Android 4.1 Jelly Bean is installed along with TouchWiz, plus Samsung’s gesture controls, shake-to-update and turn over to mute tweaks.

The Galaxy Fame is very similar, however it has a slightly larger display at 3.5-inches, although the resolution stays the same, and both a 5-megapixel primary camera and a VGA video call lens too. It also runs Google Android 4.1 Jelly Bean, but has Bluetooth 4.0 over the Young’s Bluetooth 3.0, plus it can be purchased with NFC, just like the Galaxy S3 Mini. Both phones have 1300mAh batteries, 4GB of internal storage space, plus a microSD card slot with a maximum capacity of 64GB.

Anyone interested in the Galaxy Young gets to choose between a white, deep blue, metallic silver or wine red color scheme, while those with their eye on the Galaxy Fame must make do with either pearl white or metallic blue.

As with other recent Samsung smartphone announcements, the price and availability of the Galaxy Young and Galaxy Fame are both unknown. We’re sure we’ll find out more at Mobile World Congress.