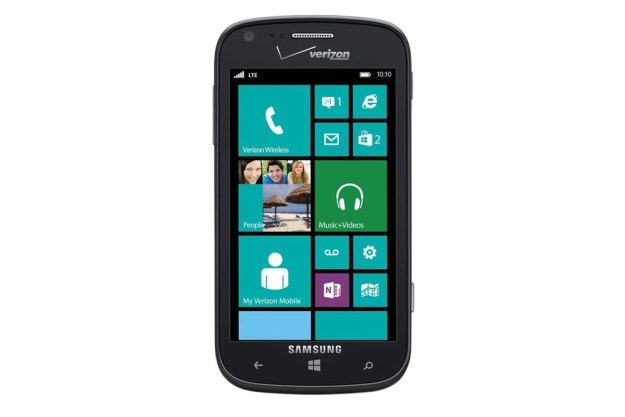 “The Samsung ATIV Odyssey is a well-designed, snappy phone that belies its budget nature and is well worth the asking price.”

Samsung isn’t going whole hog with their Windows Phone 8 investment, preferring to dip a toe into the less expensive end of the pool to test the waters. The ATIV Odyssey only costs $50 on contract with Verizon Wireless and is in direct competition with the Nokia Lumia 822. The budget Windows Phone bin is getting somewhat crowded, but this is a good thing for consumers. After all, these inexpensive phones aren’t cheap and, in some areas, give you the same experience as the more pricey models. Still, the Odyssey may have a hard time standing out in the crowd, especially since it lacks flashy colors.

With the Odyssey, Samsung didn’t modify its already established aesthetic for Windows Phone 8. Thus, the design is pretty familiar to anyone who’s seen a Galaxy S smartphone in the last few years. No bright colors or tile-inspired design, and that’s actually fine. This design language has served Samsung, and its customers, well. Comfortably curved edges that make it easy to hold, rounded corners for easy pocketing, and the light weight afforded by a mostly plastic chassis make for a phone that looks and feels good.

The 4-inch display means the Odyssey seems small in comparison to the 4.7 – 5.5-inch superphones so popular right now. Those of you who look at those giant phones with horror will appreciate the balance a 4-inch display offers. It’s big enough that the interface doesn’t feel cramped yet the phone is still small enough to fit in a normal pocket. Plus, it’s nice to hold a smartphone without feeling like you’re going to drop it.

Super AMOLED display technology ensures a bright and crisp screen, but the Odyssey still has a less than HD resolution of 800 x 480 pixels. Good news: other budget Windows Phones aren’t offering higher resolution, so this is what consumers have come to expect. Bad news: this is what consumers have come to expect. The resolution doesn’t noticeably impact the Windows Phone experience, but it is more apparent when browsing the web and reading small text. More good news: the screen has wide viewing angles and high sunlight readability.

Button placement is typical for Samsung. We wish that the power button sat lower on the right side since it’s a little awkward reaching it so near the top. We’re happy to see a dedicated shutter button for the camera. Three capacitive buttons for Back, Home, and Search sit under the display – no physical buttons here as on the Galaxy S3. The microSD card slot that’s usually hidden under the back cover is on the left edge now. There doesn’t appear to be room for it since the 2,100mAh battery takes up a lot of space.

Overall, the Odyssey’s design is comfortable and attractive and feels nothing like a budget phone with the exception of the display resolution.

There’s something comforting about the fact that, no matter what Windows Phone 8 device you use, the experience is pretty much the same. Unlike Android, where different manufacturers apply their own stamp on the interface, WP8’s distinctiveness comes from the person using the phone and not whoever made it.

The low-ish screen resolution didn’t affect our enjoyment of WP8’s interface, which shines both on big and small phones. This is particularly true of the Start Menu and the hub of Live Tiles that offer heads-up information similar to widgets on Android. These are customizable, to an extent. You can change their size – and thus how much information they display – and position to suit your needs.

WP8 is best at pulling together related information and apps into hubs that make it easy to find and utilize what you need wherever you are on the phone. Camera Lenses gives you access to third-party camera apps from one location; the Me tile shows notifications from multiple services (Facebook, Twitter, and more); and Rooms makes it easy to share and message with a specific group of people, be it family, friends, or co-workers.

Samsung doesn’t clutter the Odyssey with a bunch of pre-loaded apps. A glance into the “Samsung Zone” area in the Store reveals that this is probably because the company hasn’t ported many of its Android apps into WP8. Enjoy that while it lasts.

The few apps you do get are made with creativity in mid. There’s the Beauty lens for the camera, Photo Editor for prettying up existing shots, MiniDiary for capturing your life, Now for curated news, and Live Wallpaper. Verizon also slid a few of its apps in. VZNavigator would be a nice inclusion if the service didn’t cost extra. The more utilitarian ones like My Verizon Mobile and Data Sense are actually useful.

Data Sense is a native WP8 app, but right now only works on Verizon phones. It’s purpose is to keep you from going over your monthly data allowance by finding “more efficient ways to use cellular data” and connecting you to Wi-Fi networks whenever possible. As you get closer to your limit, it will restrict data use even further. Given that the least expensive data plan only gives users 2GB a month to work with, this is a welcome app.

Other than that, all the typical WP8 apps are also in place, including Microsoft Office and One Note. Much of your personal data syncs to a SkyDrive account (if you set one up) so that you’ll have access to files, notes, contacts, and more on both the phone and your computer.

Currently, there are only around 150,000 apps available to Windows Phone 8 compared to the over 750,000 available for Android and iOS devices. Microsoft boasts that 46 of the top 50 apps are in its store, including Facebook, many Zynga games, Skype, Kindle, and Netflix. There are bound to be some of your favorite apps missing. And since Windows Phone is still building momentum, it may be a while before top 100 and top 200 apps make it to the platform.

A dual-core, 1.5GHz Qualcomm Snapdragon processor runs things in the background, backed by 1GB of RAM. This is another non-surprise from a Windows Phone since that’s the standard hardware configuration. The 8GB of internal storage is about right for a low-cost phone, and users can always expand that since it will take up to 64GB microSD cards. The Odyssey is exclusive to Verizon Wireless in the U.S. right now and runs on the carrier’s 4G LTE network.

Since it has the same internal components, the Odyssey performs similarly to other WP8 phones, even the bigger and more expensive Windows Phone 8X. Everything in the interface is snappy, apps and games were never sluggish, and the LTE made for some speedy downloads. Call quality is standard for a smartphone; voices came through clearly and the mic does a decent job of blocking medium background noise.

A 5-megapixel camera sits on the back of the Odyssey next to a flash, an extra we don’t often see on budget phones. If you’re comparing models, you may note that the Nokia Lumia 820/822 has an 8-megapixel camera. Does that mean the Odyssey is at a disadvantage?

Not a big one. Samsung isn’t pushing the phone’s photo capabilities as hard as Nokia and HTC are with theirs. Still, the company usually puts decent cameras in its phones — that’s the case here. You can’t compare it to more expensive phone cameras, such as the Lumia 920 or the Windows Phone 8X. Up against the Lumia 822 and the other budget Nokia phones, the Odyssey takes comparable pics. Keep in mind that the basic camera app is the same, so the settings provide some enhancement, just not much. Indoor shots aren’t as noise-free or crisp as we’d like. Outdoors we were able to get bright, color-rich shots. The app could use an HDR setting for mixed light and shadow.

It’s nice that the stock camera app will play nice with some third-party offerings, so you’re only a couple of taps away from accessing more robust settings. Still, we’d like to have more options out of the box.

The generous 2,100mAh battery inside the Odyssey is rated to last up to 19 hours on 4G LTE. So far we haven’t had the phone long enough to run it down more than once, and we were able to get through over 15 hours with light usage. So far, the phone looks like it can live up to Samsung’s claims. We’ll update this review once we’ve had time to fully test the longevity.

Samsung might not be Microsoft’s favorite son in the Windows Phone 8 realm, but it’s managed to slide in on the budget level with a phone that is desirable without draining the wallet, just like Nokia. Design-wise, the ATIV Odyssey is more streamlined and attractive than the budget 800 series Lumias. Specs-wise, the Lumias have a few more powerful elements. But, when taken as a whole, they’re about on the same level.

What does that mean for you WP8-loving Verizon Wireless customers out there trying to decide between the Odyssey and the Nokia Lumia 822 (nearly identical to the 820)? It means the choice will come down to some little things: how each phone feels in the hand, whether you prefer Nokia’s included apps more, if a 0.3-inch difference in screen size is a big deal, and price.

Ah, price. The ATIV Odyssey costs $50 with a two-year contract (the mail-in rebate is automatically deducted online), the same price as the Lumia 822 at launch. However, the Lumia is now free with a contract, which is sure to entice many. And the higher-end HTC 8X, which still costs $100 on contract via Verizon’s website, is available for $50 on Amazon Wireless. Prices are bound to change even more over the next few weeks and months, and there will likely come a time when the Odyssey is free on contract, too. Of the WP8 phones on Verizon, the HTC 8X is still our top choice. The Odyssey and the Lumia 822 run neck and neck.

The bottom line is that the Samsung ATIV Odyssey is a well-designed, snappy phone that belies its budget nature and is well worth the asking price.