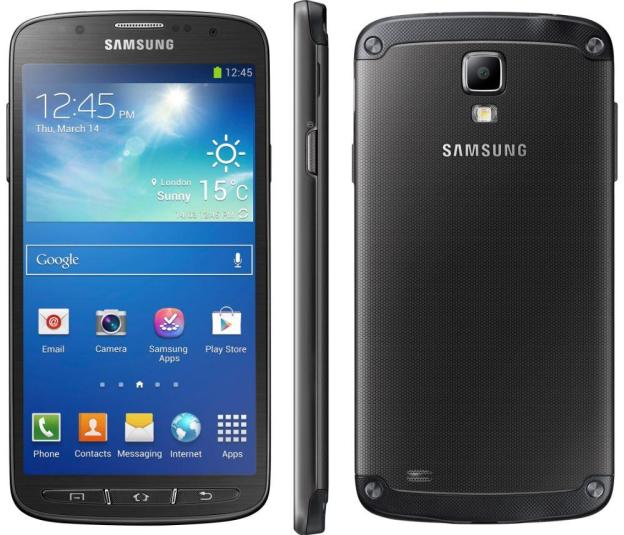 Samsung has been showing off a smorgasbord of devices over in London for its big Samsung PREMIERE Summer 2013 event, and one of them is the Galaxy S4 Active, a rugged version of the Galaxy S4 we’ve already seen announced earlier in June. This time around we’re getting more details on exactly what this rugged phone can do.

A rougher, tougher version of its flagship cousin released back in March, the Galaxy S4 Active is essentially most of what the Galaxy S4 offers in hardware, but has thrown in a new edge: IP67-rated resistance to dirt and moisture. In simple terms, this smartphone can handle most environments other smartphones can’t. Matched with this added protection is a similarly-sized 5-inch full-HD display, 2GB of RAM,  8 megapixel rear camera, Quad-Core Snapdragon processor, and three sleek colors: Urban Grey, Orange Flame, and Dive Blue.

That being said, IP67 is not a guarantee of true rugged protection for your Galaxy S4 Active. In reality, the smartphone can handle dirt and dust quite well, but only 1-meter (about 3 feet) of water for only 30 minutes. This is the limitations of the IP67 rating, and while it may last longer on your own, you can be sure that it won’t be covered on your warranty. The phone also has no ratings for impact or more common instances such as drop testing, meaning you may as well get a case for this phone anyway.

Another thing to note about being in the water is that the phone’s touchscreen will not work. However, if you do find yourself in need of underwater photography within 3 feet or less of water, then the S4 Active does have an Aqua Mode that lets you use the volume rocker to activate the camera’s shutter. While you may not want to use your regular S4 in the water, the ability to use the volume rocker as a shutter is a helpful feature for phones without dedicated shutter buttons. In short, the rugged ratings assure survival in most daily environments as long as you don’t drop it, but the 3-feet limit for water and 30 minute time frame proves it to be rather useless like most electronics in most water scenarios, but it does help the phone last in the pouring rain. We’re not sure how the IP67 rating will last if you break the screen or other fragile parts though.

While the Galaxy S4 Active is hands on over in London, it is in fact already shipping to customers who have pre-ordered here in the U.S. through AT&T, which is exclusively carrying the rugged smartphone. It’ll be in stores tomorrow, June 21, and if you’re interested, maybe you can convince the store rep to let you throw it in the sink for a test drive.

Topics
Video-editing app LumaFusion to get a Galaxy Tab S8 launch
Samsung’s Galaxy Buds earbuds line is discounted for Cyber Monday
The best smartphone stocking stuffers for the 2022 holidays
Save $200 on the Samsung Galaxy Tab S7+ with S Pen for Cyber Monday
When is my phone getting Android 13? Google, Samsung, OnePlus, and more
This Amazfit fitness tracker is $35 for Cyber Monday, and it’s selling fast
This 10-inch Lenovo tablet is $129 for Cyber Monday (selling fast)
Don’t buy the wrong iPad during Cyber Monday — get this one instead
Audible Cyber Monday deal drops the price of Premium by 60%
This is your last chance to get 3 months of Kindle Unlimited for just $1
My favorite iPhone MagSafe in-car holders are Cyber Monday bargains
Surprisingly, the iPhone 14 Pro can’t win this epic camera shootout
5 things that would make the Google Pixel Fold next year’s best foldable