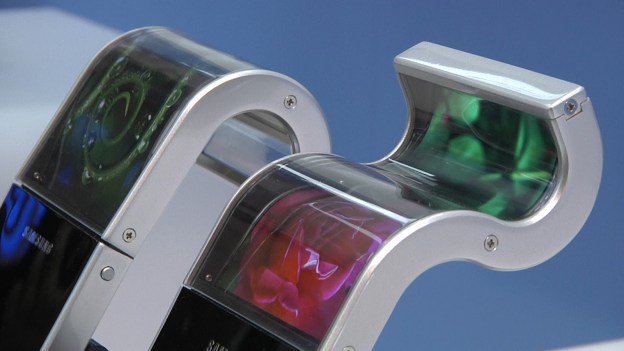 Samsung’s Youm flexible phone did make a brief appearance during CES 2013, but it was a prototype device without a release date, something which crushed our dreams of a flexible phone coming out this side of the summer. Not only this, but any hopes of Samsung revealing an exciting mobile device at Mobile World Congress were similarly slain, thanks to rumors the company wouldn’t be putting in much of an appearance at the Barcelona trade show.

With all this in mind, be sure to take the latest Samsung rumor with even more suspicion than usual, as it goes against everything you’ve just read. A German mobile blog has unearthed benchmark test results relating to the “GT-B9150,” which it claims will be officially called the Samsung Galaxy Q when it’s released.

What makes the Galaxy Q special is it’s supposed to have dual 1080p touchscreens, possibly measuring 5.3-inches each, which will fold up to make a smaller, Galaxy Note-style handset. This would make it a tablet/smartphone hybrid in the truest sense of the phrase, as in one configuration it would have a 10.6-inch screen and the other, a more manageable 5.3-inch display.

Bendy phones are still a ways away, due to the lack of flexible batteries and circuit boards, but using a hinge running down the middle is a way to get around this problem, while still coming up with a really special piece of hardware. As for the rest of the spec, the Galaxy Q might have a 1.7GHz dual-core processor, 2GB of RAM, and run Android 4.1 Jelly Bean.

The rumor concludes by suggesting we’ll meet the Galaxy Q at Mobile World Congress, which completely goes against the rumor that it won’t launch anything of note. Something as radical as this could steal the show.

Though we’d love it to be true, it does sound a little far-fetched. Still, a video found by Slashgear does show Samsung has been considering just this type of device for some years. There’s something about the model number which doesn’t fit though, as traditionally, Samsung has reserved GT-BXXXX model numbers for mid-range devices or those destined for emerging markets. Tablets usually begin with a GT-N or a GT-P, while high-end Galaxy phones wear GT-IXXXX model numbers.

So, it’s an interesting rumor which doesn’t quite add up at the moment, but we’re quite prepared to be proven wrong. If so, Samsung will have invented another new form factor, which we’ll tentatively name the flexible smartphone/tablet convertible.