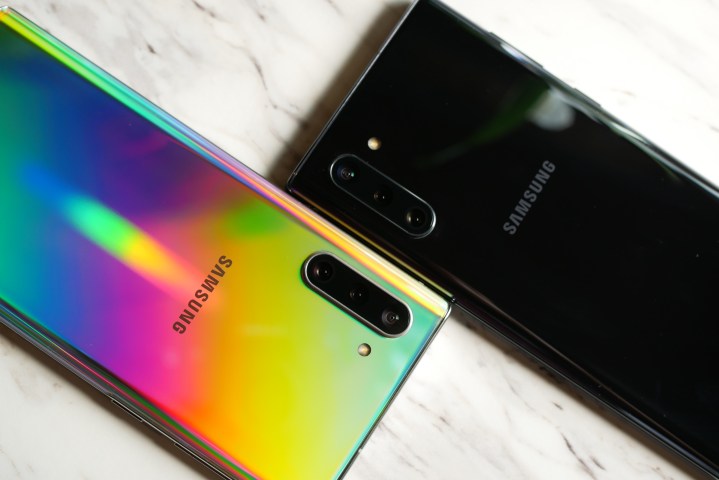 Pre-orders for the Samsung Galaxy Note 10 and the 10 Plus have begun, and Walmart is offering a great deal on them. Now through August 12, if you pre-order either device through Walmart, you’ll receive up to $150 in credit to spend at the Samsung Store.

Pre-ordering the Note 10 nets you $100 in store credit, while either the Note 10 Plus or Note 10 Plus 5G offers $150 in credit. To qualify, you can purchase the phone either through a new contract, device installment plan, or buy it outright, according to the terms and conditions. Act fast: Walmart appears to be selling out of some of its early pre-order allotments already.

The design of the Note 10 series phones is distinctly different from its predecessor. It comes in two sizes — the Note 10 has a 6.3-inch screen and the Note 10 Plus a 6.8-inch screen. Dazzling new “Aura” colors that shimmer in the light are available, including Aura White, Aura Black, and a stunning Aura Glow (the latter two are shown in the picture above).

There’s also no rear fingerprint sensor anymore: Samsung’s built that into the front screen. The edges are more rounded, and the device is thinner overall — so thin that Samsung has joined Apple in eliminating the 3.5-inch headphone jack.

Don’t fret about the headphone jack — despite Samsung’s criticism of Apple doing the same thing with the iPhone. The lack of the jack and its components allowed Samsung to place a bigger battery in the Note 10, and the company provides a USB-C to 3.5mm dongle inside the box just in case. Both devices are powered by Qualcomm’s Snapdragon 855, but the Note 10 has 8GB of RAM, whereas the Note 10 Plus has 12GB, The Note 10 Plus also offers the option for 5G connectivity (although Walmart’s not offering that particular model right now).

If you’d like to have the option for expandable storage, you’ll want to choose the Note 10 Plus, as the Note 10 does not have a microSD card slot. You also get a significantly larger battery in the Plus and 45-watt charging support, which can give the phone a full day’s charge in just 30 minutes.

Looking for more great smartphone deals? Be sure to check out our deals page.