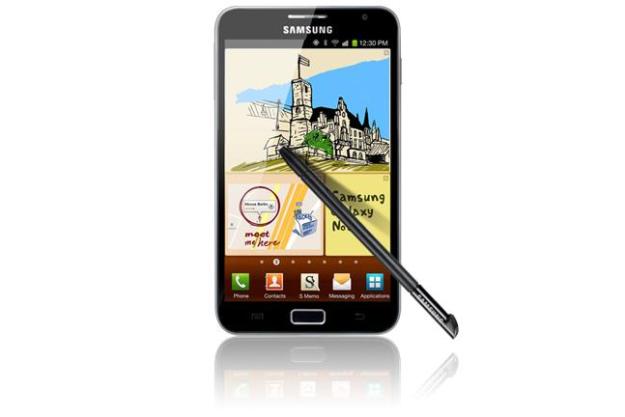 “Samsung hasn't made a huge mistake with the Galaxy Note, but for a majority of people, it's a bit too large to be a good phone.”

In the last few years, Samsung has risen to become the second largest phone maker in the world, and it’s already nipping at Nokia’s heels. The key to a lot of its success in the smartphone market has been to mimic Apple’s devices and interface, but now that it’s facing more and more legal issues, it seems to be branching out with a new strategy: trying original things. The Galaxy Note is one of the first examples of this. With a massive 5.3-inch screen and a built-in stylus, it can’t really be confused for an iPhone or any other device. But is there a market for it?

There’s no getting around it: the defining feature of the Galaxy Note is its size. If there is a limit to the size of a phone, Samsung has either reached or exceeded it. The strange thing is, your enjoyment of the Note depends a lot on how many hands you have available and how big those hands are.

A one-hand disaster: If you’re a standard-size gent or lady, using the Note with one hand isn’t just a hassle, it’s potentially dangerous. We were able to grip both sides of the phone with one hand, pull down the notification drawer, and press the volume on the left and power on the right without too much trouble, but all of those features are at the top. If you want to then press the navigation buttons (Menu, Home, Back, Search) on the bottom or open up the app menu, you have to shimmy your hand down the phone a bit. I can’t imagine how many times a Note will be dropped because someone is trying to use it one handed. Unless your hands are huge, this is not good when you’re on the go and only have one hand.

A two-handed dream: If you’re using it more like a tablet, the Galaxy Note is quite pleasant to use. It’s hardly the full tablet experience you’d get on a 7- or 10-inch device, but 5.3 inches is a bit larger than the typical 4.3-inch phone, so if you’re reading e-books or browsing the Web, the larger screen is nice. It would be odd to carry around a Note as a tablet alongside a good smartphone though. Yes, it has a bit larger screen, but everything that you can do on a Note, you can do almost just as easily, if not easier, on a 4.3-inch phone.

Construction: Like most Samsung phones, the Note is built completely out of plastic, but its construction resembles a Galaxy Tab more than the Galaxy S II. It comes with silver borders and a black or white front and back, with the white model looking suspiciously like a large iPhone 4S. Micro USB charging, an audio jack, microSD, and a SIM slot are also available.

The hidden surprise of the Note is the S-Pen, which is a special stylus built for a capacitive touchscreen. It’s a good stylus too, with multiple degrees of sensitivity and an extra button for secondary functions. The Note has built-in S-Pen software, which lets you double tap the screen to take some quick notes or doodle on a screen capture or photograph. It works decently, but it’s nothing like actually writing on paper.

No matter what Samsung does, trying to write or draw on a glass touchscreen just isn’t natural. There are also a few problems. Right now, for example, you cannot tap the navigation buttons with the stylus, which breaks the flow of what you’re doing. Still, it’s nice to have the option of using a stylus. It would be great if more phones came with one, but there’s a reason why they mostly disappeared. They just aren’t great for everything.

The Galaxy Note may be huge, but Samsung didn’t skimp on the hardware either. Inside, it runs on a 1.4GHz dual-core processor, 1GB of RAM, 32GB of internal storage, and a 5.3-inch 800 x 1280 pixel Super AMOLED screen. Everything you really need in a smartphone appears to be present, including some newer features like a near-field communications (NFC) chip.

We found the phone to be quite responsive, but just for kicks, we ran a Quadrant benchmarking test to see how it stacked up when it came to processing power, 3D graphics and the like. Surprisingly, it was a bit low for a 1.4GHz dual-core device. It scored about 1,930 on each of our tests, less than the 2000+ average for the Galaxy Nexus, and a lot less than other recent devices like the Droid Razr Maxx, which scored an impressive 2,270 in our latest test. It should be noted that the Quadrant test is hardly perfect, and scores do vary quite a bit.

The operating system is the most disappointing part of the Galaxy Note. Though Samsung’s TouchWiz user interface looks nice and has all of the pretty widgets that we’ve grown to like on the Galaxy Tabs, Android 2.3 (Gingerbread) is showing its age. We look forward to the Android 4.0 update, but there’s no saying when it will come. However, we’re an especially picky bunch. For most users, Gingerbread should work well enough.

There are some annoying app issues we’ve had. Because of the strange 800 x 1280 screen, Samsung added an extra column of icons to homescreen, which means that none of the widgets for any app will stretch across your entire homescreen — only Samsung’s widgets will go the distance. The extra-wide resolution also gave us a headache when using Google Music, which tries to show artists in coverflow view while in portrait mode as well as landscape, but does a crappy job of it. We can’t find a way to view our songs in a list, making the app somewhat unbearable to use.

Some of Samsung’s built-in apps are fine. These include S-Memo, My Files, Task Manager, and Social Hub, but the way the Yellow Pages YPmobile app has been permanently affixed to the Contacts list is annoying. A few included bloatware apps are removable, but many are not.

The Galaxy Note has an 8-megapixel rear camera and 2-megapixel front camera, but neither are particularly premium. The rear camera does a decent enough job outdoors, but often fails to autofocus and has a shutter speed of about 1 to 3 seconds, which is quite slow compared to top devices like the Droid Razr Maxx, iPhone 4S, Galaxy S II, and Galaxy Nexus. Two of those are also made by Samsung. It’s clear that the camera on the Note is not Samsung’s best. We’ve included an outdoor video and camera shot. The device performed much like Samsung phones from about a year ago when it came to taking indoor or night shots, which is a shame. Believe it or not, smartphone cameras have come a long way in a year.

We’ve had no trouble getting or keeping a signal, nor have we had trouble hearing or being heard on the Note. The only problem with the Note as a phone is its size. It’s positively awkward to hold a phone this big up to your face to talk. If you’re a regular user of headphones or a Bluetooth headset, then the Note is fine, but if you’re like us and just talk into the phone, you’re going to feel awkward and the Note will probably block a bit of your field of vision. Using it reminded us a bit of the old Nokia N-Gage, which required you to hold it sideways and talk into it like a taco.

If you’re lucky enough to be in Las Vegas, New York, or one of the other few cities with AT&T’s 4G LTE network, the Note is a great device to take advantage of the currently untapped network. During all of our tests in Manhattan, New York, we got in upwards of 20Mbps download speeds and 5Mbps to 10Mbps upload speeds. This is similar to how well Verizon’s LTE network used to perform before many phones were on it, so we suspect it will slow down a bit, but hopefully we’ll continue to see 5Mbps to 10Mbps downloads for the foreseeable future. This means that all you AT&T users can rest easy. You won’t be in the slow lane for long.

Though Samsung is touting impressive battery life numbers for the Note, we’re not seeing anything close to 26 hours of talk time and 40 days of standby time. Yes, the battery is 2,500mAh, which is about 700mAh larger capacity than most smartphones, but the Note also has a dual-core processor, a huge screen, and AT&T’s 4G network draining its juice. Once we started using the network to download some audio and browse the Web, our battery quickly began to drop. Most users should be able to get through a day without charging, which is far more than we can say for the Galaxy Nexus, but the battery life doesn’t come close to the kind of performance we’ve seen from the Droid Razr Maxx and its 3,300mAh battery. That phone is a wonder.

Samsung hasn’t made a huge mistake with the Galaxy Note, but for a majority of people, it’s too large to be a good phone. It’s difficult to use with one hand, and talking on it feels like you’re holding a brick to your face. At the same time, though the included S-Pen is nice, the Note is too small to be an effective tablet either. Almost everything you do on the Note can be done without much sacrifice on a 4.3 or 4.5-inch phone, which themselves push the limits of size. If you have big hands or often use your phone with two hands, then the Note may be a good device for you. Aside from its size, most everything else about it is solid. At $300, it’s pricey, but no more than any of the other top-of-the-line 4G LTE phones on AT&T and Verizon.