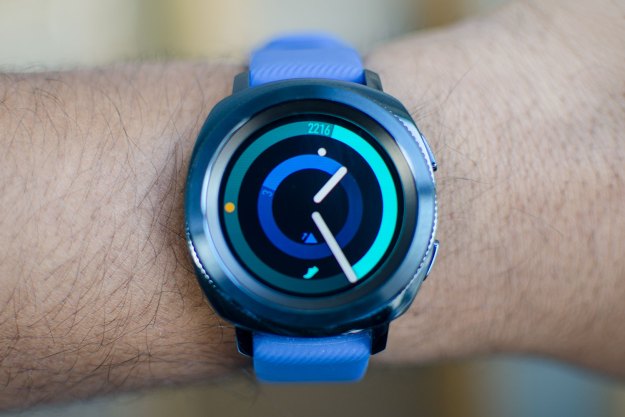 Samsung’s Gear Sport is the best Android smartwatch, and strangely enough, it doesn’t run Android Wear. Smartwatches need to tug at our heartstrings, and in our Samsung Gear Sport review, we found ourselves wanting to grab the watch to wear whenever heading out. While the Gear Sport isn’t the most attractive Android smartwatch — that is reserved for the Movado Connect — it still looks great, it’s slim, and most of all, the rotating bezel makes it fun to use.

We still think the Apple Watch Series 3 is the best smartwatch you can buy, but Android device owners can’t use it. The Gear Sport is a close second, but it’s the best option if you’re on Android.

Earlier this year, Samsung released the LTE-connected Gear S3 smartwatch. It’s big, bold, and bulky. Put the new Gear Sport next to it, and it’s easy to notice the differences. The Sport is slimmer, and has a smaller 1.2-inch AMOLED screen, though with the same 360 x 360 pixel resolution. The rotating bezel is a little more subtle with smaller ridges, and despite the screen being fully circular, the 42.9mm case isn’t — it’s a tad squarer than round.

Most importantly, it’s lightweight and comfortable. The lugs that hold the strap are less pronounced and smaller, allowing the watch and strap to sit on your wrist without any gaps. The included silicone band helps a lot too; it has a soft, textured feel that’s pleasant against the skin, and it’s easy to slip on. If silicone is too sporty, you can always swap it out with any 20mm band.

The Gear Sport is downright stylish.

You can go for the black or blue Gear Sport, and we opted for the latter. The case is subtly blue, but the band is far flashier (it won’t hide the fact that you’re wearing a smartwatch). Coupled with our favorite “Pop” watch face, the Gear Sport is downright stylish. Despite its “Sport” name, you can easily wear this watch with most non-athletic outfits.

The AMOLED screen is sharp, colorful, with pitch-dark blacks. It gets incredibly bright — we set the brightness to 60 percent and had zero issues reading the screen in broad daylight.

It’s easy to forget you’re wearing the Gear Sport, while the same can’t be said for the chunky Gear S3. The Gear S3 feels like a smartwatch pretending to be a traditional analog watch, while the Gear Sport completely embraces its smartwatch looks, with a youthful punch.

The hallmark feature that makes Samsung’s smartwatches distinct from other smartwatches is the rotating bezel. It’s the outer layer surrounding the screen — you can rotate it left or right, and it makes a ticking sound like when rotating a combination lock.

It’s the best way of interacting with a smartwatch operating system. Rotate it to the right to see widgets, and rotate it to the left to see your notifications. You can even use it to scroll through walls of text. Since you won’t need to touch the screen as often, it helps prevent smudges and your finger isn’t blocking the small screen.

The rotating bezel is a big reason why we like the watch. Samsung said the tactile sensation and clicking sound have been improved, and it’s noticeable. It’s satisfying to turn and hear the clicks, and best of all it works without a hitch. It does, however, feel a little loose from the case because if you tap the bezel, it clinks with the metal, and it can be a little loud.

The Gear Sport isn’t as fast as the Apple Watch Series 3, but it’s speedier than any Android Wear smartwatch on the market. It shares the same specs as the Gear S3: A 1GHz dual-core processor with 768MB of RAM, and 4GB of internal storage. Scrolling through the interface and apps is fluid and smooth, and we generally haven’t seen any problems with performance.

Samsung’s proprietary operating system, Tizen, powers the Gear Sport, and the interface is simple to use. If you’re worried how well another OS works with Android, fret not: You’re able to respond to or interact with every notification that comes through. It’s easy to delete notifications; just swipe them up and they immediately disappear from the phone. Tap on a notification, and you can read it in its entirety and act on it. You can use your voice to reply to a message, scribble or type on a keyboard, quickly tap some canned responses, or send emojis.

While the Gear Sport is compatible with iOS, you can’t respond to many notifications, and overall you’re a lot more limited in what you can do. This is the case with Android Wear on iOS too, so if you have an iPhone you’re better off going with the Apple Watch.

The Gear Sport can automatically detect your workout after 10 minutes.

The 4GB of storage lets you add music to the watch so you can play it via Bluetooth-connected headphones or earbuds, if you don’t have your phone near you. The pairing process is quick, and switching between music from the phone and music on the watch is quick. For Google Play Music, which is the default music player on Samsung phones, transferring music to the watch is a little tricky without a computer. Samsung’s Gear app isn’t able to identify downloaded songs from Google Play Music, so we had to use a third-party app called Music Mate to get it all to work. After that, it was easy to add songs to the watch via the Gear app. If you’re on Spotify, you won’t have much of a problem as the Spotify Tizen app easily lets you add your downloaded playlists to the watch — the Apple Watch can’t do this.

Our main gripe, and this extends to Android Wear, is the lack of app support. Ordering an Uber is neat and all, but we would much rather have the ability to initiate conversations without having to wait for a message. There’s no Facebook Messenger, Allo, Hangouts, or WhatsApp, which means you can only send an SMS to your contacts (with the phone tethered). On the Apple Watch, you can open Facebook Messenger and start a conversation with someone from the watch itself.

Two of the main differences between the Gear Sport and the Gear S3, other than size, are the lack of LTE and Magnetic Secure Transmission (MST). The former means you will need your phone with you to get notifications on the Gear Sport. There’s still GPS, which you can use to track your runs via various fitness apps in the Galaxy Apps store.

MST is the technology Samsung uses to power Samsung Pay. It allows you to use a Samsung phone or the Gear S3 to make contactless payments wherever credit or debit cards are accepted. It’s a step ahead of near field communication (NFC), which is the technology Apple and Google use with Apple Pay and Android Pay. On the Gear Sport, Samsung has opted for an NFC version of Samsung Pay, instead of MST, making the watch’s payment capabilities the same as its competitors. It allowed the company to make the watch a little smaller, but the tradeoff is you can only use Samsung Pay retailers that support NFC.

There’s more the Gear Sport can do: It can control PowerPoint presentations, and can act as a controller for the Samsung Gear VR virtual reality headset. Best of all, you can use it to manage your smart home devices via Samsung Connect, like with HomeKit on the Apple Watch. This is an area where Android Wear struggles despite having Google Assistant onboard.

Samsung’s watch also has an assistant, but it’s not the company’s Bixby platform — it’s the rather basic and slow S Voice. Double-tap the home button and you can inquire about the weather, place calls, or send a text. It’s terrible at search queries, and we’d much prefer Bixby over it. Samsung said it’s focusing on Bixby with its smartphones first.

Samsung’s approach to fitness on the Gear Sport revolves around the Samsung Health app. On the watch, it can track your calories, your steps, distance traveled, stairs climbed, and more. You can also add a widget to now add how many calories you eat, so that it can automatically deduct it from the number of calories burned. The problem is knowing how many calories are in what you’re eating — you typically need a smartphone to look it up.

The Gear Sport can automatically detect your workout after 10 minutes, where it will constantly monitor your heart rate. It’s accurate, but the workout can go on for a few minutes longer than after you actually stop. Automatic detection works with walking, running, cycling, elliptical training, rowing machines, and a dynamic workout mode covers other activities. You can also manually start some of these sessions, including swimming (the watch is water resistant up to 50 meters, and can even work in salt water).

The GPS on-board lets you map your runs for accurate distance measurements, and the heart rate monitor can also measure your beats per minute whenever you ask it. We found it to be fairly precise: It measured 89 beats per minute, and we manually calculated 85 bpm.

All of this works with a myriad of Under Armour apps that don’t come pre-installed, but Samsung is pushing them heavily. You can choose from Endomondo, MapMyRun, and MyFitnessPal on the Galaxy Apps store. We should note — we installed MyFitnessPal, and it did not load for us. Strava, one of the biggest fitness apps, is also not available on the Gear Sport.

With the always-on screen and GPS toggled off, we returned home around 6:30 p.m. with 75 percent remaining. Our usage largely involved interacting with notifications. We didn’t put the watch on the charger overnight, and it ended up dying around 3 p.m. the next day. You can definitely stretch the Gear Sport’s 300mAh battery longer.

If you leave GPS and the screen on, you’ll unsurprisingly see a hit on battery life. By 7 p.m., the watch was at 47 percent. After a day with the same settings, a 30-minute workout session, and some music streaming, the watch ended with around 35 percent by 7 p.m.

The Gear Sport’s charger is a dock — just plop the watch on it and it’ll charge up relatively quickly. It hit 100 percent from zero in about an hour and a half.

Samsung offers a standard limited warranty that protects your device from manufacturing defects up to one year from purchase.

The Samsung Gear Sport is great for people who want a feature-rich smartwatch that’s slim, lightweight, and comfortable.

Yes. One of the closest competitors is a Samsung product — the Gear S3. It’s bulkier and bigger than the Gear Sport, but it has an LTE connection and contains MST technology that lets you use Samsung Pay in far more locations than the competition. It costs a little more at $350.

For Android device owners, take a look at the Huawei Watch 2. There’s no LTE model in the U.S., but it essentially offers the same features as the Gear Sport in a small package. It can be found for lower than $300.

For iOS owners, your experience with Samsung’s Gear smartwatches won’t be as satisfying as using Apple’s option, the Apple Watch Series 3. With a similar price, an optional LTE connection, a small size, and excellent build quality, there’s no better choice.

The Gear Sport can survive up to 50 meters under water, including salt water, and its metal build should keep the glass protected without issue. Expect the watch to last for two to three years, as you likely won’t get software updates after the second year.

Yes. If you’re looking for a stylish smartwatch without an LTE connection, the Gear Sport is your best bet.

Best Apple Watch deals for May 2022