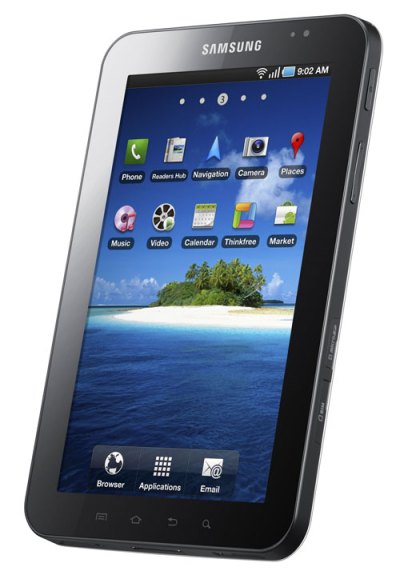 The tablet wars are heating up. We’ve been saying that ever since the release of the iPad, but it has turned out to be a slow simmer rather than a fast boil. There are more tablets on the way, many more tablets on the way, but so far, for the most part, we have been left to stare longingly at the specs and pictures of what will soon be the next wave of tablets. One of those tablets, perhaps one that will actually be able to rival the iPad, is the Samsung Galaxy Tab.  While we do not have an exact U.S. release date yet, we now know the price.

The Galaxy Tab will retail for between $200 and $300, but the final pricing will vary based on wireless-carrier subsidies; no U.S. carriers have been announced. According to the Wall Street Journal, Samsung is in talks with multiple carriers, and the tablet will likely not be sold by Samsung, but rather through the carriers that agree to carrier the device. The Galaxy Tab is technically similar to Samsung’s Galaxy S smartphone, which is now being carried by T-Mobile, Sprint, AT&T, and soon to be Verizon.

The Galaxy Tab should first debut in Italy next month, then Vodafone will debut the tablet in several European markets shortly after. It is expected to be available worldwide in time for the holidays, and Samsung has claimed that it expects to ship 10 million Galaxy Tabs this year, which would give it one-third of the tablet market in the world. Following the release of the seven-inch tablet, Samsung is also considering increasing the Galaxy family to include a six- and a 10-inch model, but neither have been officially confirmed.

The Galaxy Tab features a seven-inch touch screen, an Android 2.2 operating system, Bluetooth 3.0, two cameras and a 1Ghz Cortex processor. Check out our head-to-head between the Galaxy and the iPad for a full list of the specs.

Topics
Video-editing app LumaFusion to get a Galaxy Tab S8 launch
Forget Apple’s newest iPad — the Galaxy Tab S8 should be your next tablet
Save up to $350 on the Samsung Galaxy Z Fold 4, Z Flip 4
Samsung Galaxy S23: release date, specs, price, and all other rumors
Apple Health vs. Samsung Health? What I learned after using both
I still love my iPhone 14 Pro, but not for the reason I expected
The best iPhone apps to download in December 2022
Instafest app: How to make your own Spotify festival lineup
How old phones became the cool, good phones in 2022
The best Android apps for December 2022
The Galaxy Z Flip 5 might fix the Flip 4’s biggest design flaws
Don’t listen to billionaires like Elon Musk — app stores are fantastic
The best Samsung Galaxy S22 Ultra screen protectors for 2022