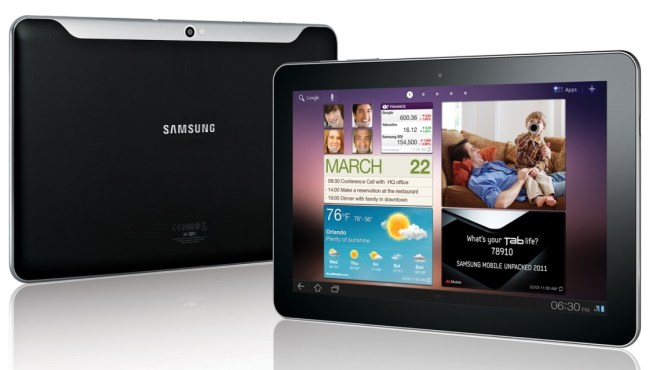 Samsung announced today plans to debut a new ultra-high-resolution display at the SID Display Week 2011 International Symposium in Los Angeles next week. The 10.1-inch WQXGA tablet touch screen far exceeds the specs of any other screen currently on the market, with a resolution of 2560×1600 and a pixel density of 300 dpi.

In addition to cramming the LCD display with bright pixels, Samsung’s PenTile technology allows the screen to pull 40 percent less battery energy in power-saving mode than those that use standard legacy RGB stripe technology.

“Samsung’s PenTile display technology is the only display technology that operates at 40 percent less power yet provides twice that of Full HD-viewing performance for consumers compared to legacy RGB stripe LCDs. There is no other commercial display technology on the market today that offers this high of a resolution and pixel density in a 10.1-inch size display,” said Dr. Sungtae Shin, Senior VP of Samsung Electronics, in a statement.

While some industry watchers, like TUAW‘s Chris Rawson, say that it “unlikely for a number of reasons that Apple will employ this exact display in the iPad 3,” the high-resolution, low-power combination of the screen shows that, at the very least, it is now technologically possible (and economically viable) to make a tablet with a display that rivals the Retina display of the iPhone 4.

Apple debuted the Retina display on the iPhone 4 last year. Since then, speculation has repeatedly swirled around when Apple might bring such a high-quality screen to its iPad line. The screen used in both the original iPad and the iPad 2 currently measures 9.7-inches and has a resolution of 1024×768, less than half that of Samsung’s new display. (So far, rumors have indicated that the iPad 3 would have a screen with exactly twice the resolution of the iPad/iPad 2.

Samsung does sell tablets that compete with Apple’s iPad line in the form of its Galaxy Tab line. But the company is also a huge parts supplier to Apple and a wide variety of other technology makers, which makes it at least possible that Samsung’s hot new screen could find its way into the next-generation iPad — or at least the next Galaxy Tab. As always, only time will tell.