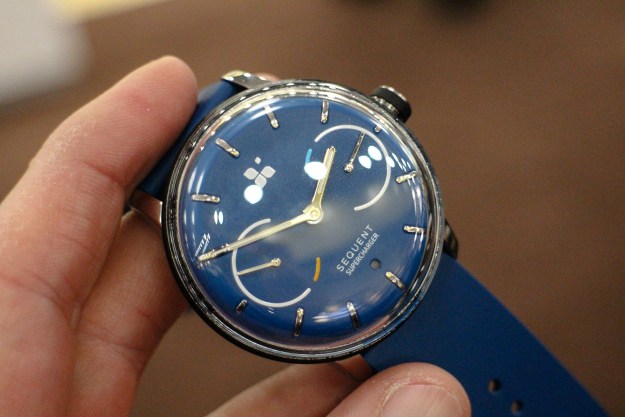 “A revolution in the hybrid smartwatch industry, the Sequent Supercharger could be the shape of things to come with its true automatic movement.”

A watch that combines an automatic movement and smart features, without a battery that needs to be charged every day, is impossible, right? Frederique Constant’s solution is to cleverly combine a mechanical movement with a separate battery-operated platform, providing an elegant and traditional power system for its Hybrid Manufacture watch. But newcomer Sequent has gone all out to produce a true automatic watch with smart features, with a kinetic self-charging battery that never needs to be plugged in. It’s called the Supercharger, and it’s a very appropriate name.

The mechanical movement’s kinetic energy is converted into electricity using a mechanism that stores collected power in capacitors feeding the smartwatch’s appetite for energy. A variant using the same principle is found in eco-friendly touch-based toilet flushes in public bathrooms. What does this mean in everyday use? Sequent said without doing anything more than regular movement over the course of a week, the watch will run GPS for one session, power three workouts, and continuously measure activity, time, and basic notifications.

But it’s not all about the technology. The Sequent Supercharger has great style, and is very different to the watches we’re used to seeing from Fossil, or even established watchmakers like Alpina and Mondaine. It’s appropriate we met the Sequent team in the Ateliers space — an area filled with eclectic watch makers pushing the design envelope — at Baselworld 2018, as it has a distinctly unique look.

Sequent has gone all out to produce a true automatic watch with smart features.

The body is made from metal, but we’re slightly disappointed by the lack of sapphire crystal on a watch like this, and at this price. Sequent has chosen mineral glass instead. The rubber strap is a delight, and has been specially balanced to keep the watch on top of your wrist, and the clasp sensibly placed under it. It may sound like a small thing, but it enhanced comfort considerably, and the strap’s soft material felt great. There are other strap choices if the silicone isn’t for you.

The face has two subdials, one showing power reserve and the other your daily step count. Flip the watch over and there’s even a heart rate monitor. Hard to believe on a watch that doesn’t require daily charging.

Sequent launched the Supercharger on Kickstarter in June 2017 and it became an instant success. It will be ready to ship in June, after a last minute issue with a supplier forced a delay. The good news is if you want one now, you can pre-order one on Indiegogo. You’ll pay more than people who opted for the Kickstarter early bird deal — between $500 and $700 depending on the option you choose. Sequent is also already planning its next product, which will be stripped back in terms of smart features.

This may sound expensive when compared to hybrids from Skagen, Fossil, and others; but it does reflect the extent and complexity of the technology inside. Remember, this watch doesn’t need to be plugged in to charge up. Instead there’s an automatic movement usually found in expensive mechanical watches, but it offers more functionality than some watches that do need daily charging. We think that’s quite an achievement, and while we’re not too sold on the design on a personal basis, there’s no denying it’s attractive.

It’s also, like the Frederique Constant Hybrid Manufacture, the first step towards a battery-less smartwatch future. Charging is a barrier against smartwatches becoming popular, and even an annual battery replacement isn’t something everyone wants to do. However, we haven’t established reliability in the real world yet, if Sequent’s power claims are accurate, or how the watch will cope with being left without use — normally an issue on automatic watches — by owners potentially unaware of how to look after it.

The watch world and the technology world continue to converge, and the results are getting more and more tempting by the day. We look forward to testing the Sequent out further following its release.

Topics
Video-editing app LumaFusion to get a Galaxy Tab S8 launch
TicWatch Pro 3 Ultra hands-on review: Amazing battery life
The best Garmin watches of 2022
All the new tech that blew our reviewers away this month
Motorola G Stylus 5G hands-on review: Notetaking nirvana on a budget
We asked the experts if biological sex affects heart rate sensor accuracy
I still love my iPhone 14 Pro, but not for the reason I expected
The best iPhone apps to download in December 2022
Instafest app: How to make your own Spotify festival lineup
How old phones became the cool, good phones in 2022
The best Android apps for December 2022
The Galaxy Z Flip 5 might fix the Flip 4’s biggest design flaws
Don’t listen to billionaires like Elon Musk — app stores are fantastic