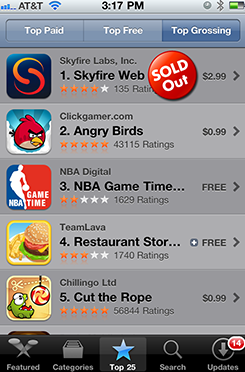 A few short hours after debuting, the browser that was supposed to bring flash video to iPhones around the world mysteriously disappeared from the iTunes App Store. The developer stated that the Skyfire browser had “sold out of inventory” shortly after becoming the top grossing app on iTunes. Suspicions immediately centered on Apple who could conceivably be a bit put off by someone designing a work around to Apple’s long-standing iOS Flash-embargo. It turns out that Apple can’t be blamed here. While of course the digital app didn’t “sell out” the demand for the browser was so great that Skyfire’s servers became overwhelmed and the company had to yank the app from iTunes to avoid performance problems.

You see, Skyfire doesn’t actually play Flash videos per se. Rather it uses Skyfire’s own servers convert Flash videos to the iOS-friendly HTML5 thus rendering the videos playable on iPhones. The videos are also compressed by about 75 percent in an effort that’s supposed to avoid bandwidth issues.

When the server capacity issues are addressed (and the app should presumably reappear shortly thereafter), users can expect more than just Flash videos from the browser. There’s also full support for Safari-style Web browsing as well as extra features designed for social networks including quick page viewing and easy content sharing. The browser also integrates a nifty search function that will scan pages for key content and then display related information on a new screen.

Of course, the main draw here lies with the Skyfire’s Flash video capabilities (and we should note that Skyfire is only capable of displaying Flash video) and the server situation will have to be addressed before that feature will be operational again. Skyfire hasn’t yet said when this might happen. When it does, iPhone owners can expect to pay $2.99 for the pleasure of viewing Flash video. For the time being, the browser is currently available on both Android and Symbian operating systems.