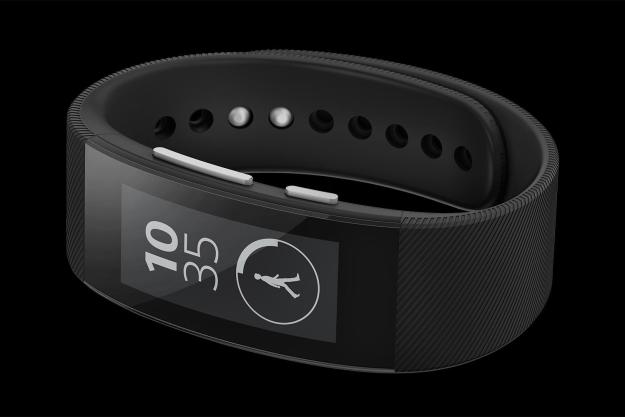 “Sony’s SmartBand Talk is ideal for anyone who can’t decide whether to buy a fitness tracker or a smartwatch.”

Sony could be accused of playing it quite safe with its mobile line-up. For example, the Xperia Z smartphones look great, but it’s hard to visually tell the difference between them. The Sony SmartWatch 3 made the daring (for Sony) jump to Android Wear, but it’s still conservatively styled, and slightly lacking in excitement.

The SmartBand Talk is different. It stands out from the competition, and although it’s not the world’s most exciting-looking wearable, it brings new guts to the table. Does that make it something you’ll want to strap to your wrist? It depends on your experience with wearables, but if you’re not sure which type of wristband is for you, it could turn out to be the perfect choice.

Feature packed, but each one limited

Sony’s SmartBand Talk does many things well, but none of them perfectly or comprehensively, because the SmartBand Talk isn’t a technical marvel with a whopping processor or a big touchscreen.

It can function as a basic wrist watch because it displays the time on the main screen. It tracks your activity and sleep, runs tiny add-ons to activate certain features on your phone, displays notifications, and will work as a Bluetooth speaker and microphone for calls.

Let’s look at each one in more detail.

Counting steps is a staple function of any wearable, and the SmartBand Talk will break them down into walking or running, plus keep watch over you while you’re sleeping. This data is shown on the main screen, and collated inside Sony’s LifeLog app.

If you’re not sure which type of wristband is for you, it could turn out to be the perfect choice.

LifeLog also tracks how you use your phone, and notes down how long you spend playing games, browsing the Web, on calls, or using social networks. Important moments can be highlighted with a bookmark, and there’s a shortcut on the SmartBand Talk to add one.

LifeLog is fun, provided you put in the time and then make use of the bookmarks. However, if you’re hoping it’ll suggest workouts based on your activity, or anything much deeper than simply noting the data down, you’ll be disappointed. The SmartBand Talk’s step count was also very optimistic, and often misread what I was doing. For example, it was convinced that me driving for 30 minutes was worth at least 1,000 steps.

The sleep tracker covers light and deep sleep, and has a smart alarm which will wake you up during a light sleep phase. This is through a vibrating alarm, and I found it hard to get used to. Using the Beddit sleep monitor’s similar feature where an alarm sounds on the phone felt far more natural.

It’s hard to call the extra features available for the SmartBand Talk “apps.” Yes, they’re small software add-ons, but almost all of them have a single function and rarely require much interaction to operate. For example, you can add a remote shutter release for your phone’s camera, a LifeLog bookmark button, and even a small voice-recording note taker.

If you’re wondering why these aren’t all included as standard, it’s because the SmartBand Talk isn’t a powerful device. Load it up with all the available add-ins, and it slows down an interface that isn’t all that fast to begin with. Strip it down to ones you’ll actually use, and speed isn’t a problem. It’s sensible really, and lets you keep the device free from feature bloat.

If you want to receive every notification from your phone on your wrist, regardless, the SmartBand Talk is probably not the device for you. It’ll deliver Hangouts, SMS, incoming calls, and various social media messages; but emails, or anything from a third-party app, it’ll ignore, or deliver sporadically. It worked fine with Google Inbox, but not with LG’s own email app, or CloudMagic. However, when it does show a message, it does so clearly and legibly, and announces its arrival with a vibrating alert.

It’s not a phone, but it does have a microphone and speaker

The SmartBand Talk works like a Bluetooth earpiece, but instead of in your ear, it’s on your wrist. It doesn’t provide the most private of conversations, but that doesn’t matter when taking them at home, and the volume often isn’t sufficient for noisy environments anyway. According to the person on the other end of the line, it was obvious the microphone wasn’t near my mouth, and they assumed I was using a speakerphone.

The feature did make sense when I was jotting down an address while on the phone, because I could write and hold the paper steady at the same time, all while still communicating.

The SmartBand Talk weighs just 24 grams. That’s about the same as a Jawbone UP24 fitness band, and 14 grams less than even the Pebble smartwatch. It straps to your wrist with a silicone band and clasps together using a push-stud system. It’s quick, safe, and convenient. Once it’s on, the comfortable SmartBand Talk is almost unnoticeable. My wrist never got too sweaty, and it’s so light I sometimes had to check it hadn’t fallen off.

IQ Shield LiQuidSkin Screen Protector ($10)
Every screen can get smudgy or scratch, even a wearable one. Protect yours with these screen protectors.

Sony Xperia Z3 ($600-$630)
The TalkBand will work with any reasonably new Android phone, but it fits best with Sony’s Xperia lineup. The Z3 (T-Mobile) and Z3V (Verizon) are the cream of the crop.

Like the aforementioned Pebble, the SmartBand Talk has an E-Ink screen, rather than a color LCD or OLED touchscreen. It measures 1.4-inches and has a 296 x 192 pixel resolution. Because it’s E-Ink, the display is monochrome, and the only option is to inverse the black and white colors. Using a white background made the display more readable for me, but there’s no backlight, so it’s useless in the dark.

It’s not a touchscreen, but the screen does respond to touch. Well, actually it responds to a very decisive prod. For example, when a notification appears, a strong tap is needed to reveal the message. A soft, gentle caress doesn’t work here, and bashing away at the screen isn’t the subtlest of actions.

There’s a metal volume rocker on the righthand side that doesn’t demand such harsh treatment, along with a hole for the microphone. On the other side is a micro-USB port for charging the SmartBand Talk. The 70mAh battery lasted for just over three full days, unless it was used for long calls, but this was easily stretched out to five days by turning it off at night. A rubber cover goes over the charging port, ensuring the SmartBand Talk meets the requirements for an IP68 rating. I wore it in the shower without any problems.

If, like me, you want the lightweight, power-sipping convenience of a fitness tracker, with a few smartwatch-style features added in, just without the extra weight and decreased battery life, then the SmartBand Talk makes sense. It’s functionally mid-way between the two devices, and a solid compromise.

The SmartBand Talk may have slipped under your radar thanks to the wealth of other wearables hitting the market at the moment. This is a shame, because it’s one of the few I’d happily use every day.