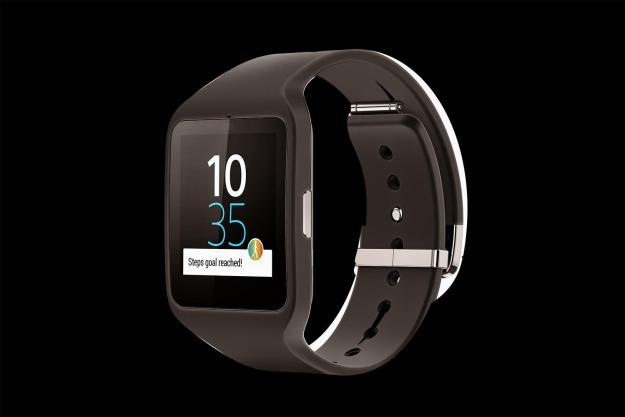 “The SmartWatch 3 is the best square Android Wear watch ever. It’s waterproof, slim, stylish, solidly built, and packed with the latest features, including GPS.”

Sony has an established history with smartwatches, but the new SmartWatch 3 is the first to use Google’s Android Wear operating system, opening it up to more apps, and a wider audience.

The SmartWatch 3 doesn’t have the market to itself though, and comes at a time when there are many desirable Android Wear watches on sale. Does it stand out, or is the lack of a circular screen going to hurt its chances of success?

Great build quality, but a non-standard strap is unfortunate

On the wrist, the SmartWatch 3 has a clean, uncluttered, stylish look. While I was wearing it, several people commented on how modern it looked, with some even preferring it to the round G Watch R.

It has a rectangular screen, separating it from the circular-screened Moto 360 and the G Watch R, making it more reminiscent of the G Watch, and the Samsung Gear 2. Like other Sony wearables, the watch face is the “Core” of the device, and can be removed from the strap entirely.

It’s solid as a rock, and cleverly designed to look very slim on your wrist.

The screen has a slight curve, and is mounted on a plastic shell with a polished metal rear casing. It’s solid as a rock, and cleverly designed to look slim on your wrist, despite it being quite thick when examined closely.

A silicone strap keeps the SmartWatch 3 in place. It’s thick, but it’s an absolute lint and dust magnet. The clasp is made of a polished metal, looks excellent, and is easy to adjust for a perfect fit. However, the way the clasp is held to the strap meant it often ensnared a hair on my arm, pulling it just enough to be painful. The strap isn’t as comfortable as a leather one, and did get sweaty after a very long day.

Because the watch itself is removable from the strap, there’s no option to replace the strap with a different one, but Sony is going to release its own range of custom straps in the future.

Android Wear will only get better

The latest version of Android Wear is installed on the SmartWatch 3, ensuring it takes advantage of the added GPS functionality and offline music playback Google has added. The software is identical to that found on other similarly equipped smart watches, so both the positive and negative aspects of Google’s wearable OS are present and correct.

It’s early days for Android Wear, and its functionality is limited. It’s stable though; the integration with Google Now is slick; and voice control makes sense on a wrist-worn device. Provided you stick to the basic phrases — reply to messages, start a timer, open apps — there’s little need to interact with the screen on the watch, let alone your phone. It’s fun, natural, and provided you can get past talking to your watch in public, a quick way to operate the device. Ambient noise wasn’t a problem, and speaking to the SmartWatch 3 normally while walking down a busy street, or in a small cafe didn’t stop it from understanding me.

Android Wear is better designed for a rectangular watch face, and doesn’t suffer from the slight annoyances found on a round device. Selecting numbers from a list when sending a message, for example, is possible here, while a pain on the G Watch R.

Sadly, Sony’s selection of watch faces isn’t inspiring. There are only a handful of custom alternatives outside of the stock Android Wear options, and none are very exciting. It’s also annoying that at the time of reviewing the watch, Sony hadn’t updated its Lifelog app to work with it, a surprisingly oversight given how important the app is to the company’s wearable range.

A 1.2GHz quad-core processor with 512MB of RAM powers the SmartWatch 3, there’s 4GB of internal memory, and you can pair the watch using NFC or Bluetooth. Sony has fitted a 1.6-inch, 320 x 320 pixel transflective screen to the SmartWatch 3, which it says performs better in direct sunlight.

You can forget about dust and water getting inside

The screen wasn’t all that different to the alternatives, but it did deal with reflections well. Like other Android Wear watches, turning the brightness up made the display perfectly visible in normal daylight. One feature not included on the SmartWatch 3 is a heart rate sensor, a surprising omission.

One benefit of the watch core being a sealed, separate unit is the SmartWatch 3’s IP68 rating, which is the highest achievable. It means you can forget about dust getting inside, and be safe in the knowledge it’ll withstand water for about an hour down to a depth of two meters. That’s exactly the level of protection you want in a watch, and it trumps the competition.

A major selling point of the SmartWatch 3 is the built-in GPS. This means you can go running wearing the watch, leave your phone at home, and still sync up when you return. So how does it work in practice? Well, it depends.

Right now, the choice of apps that operate with Android Wear’s GPS system is limited to Google’s own My Tracks. Provided the watch and the phone are connected, My Tracks logs your run very effectively. A GPS symbol appears at the top of the screen confirms the feature’s activated.

It works well, but isn’t helpful if you use RunKeeper, Endomondo, or any other fitness app. Support will surely come, but for now, it’s My Tracks or nothing. There is a positive angle to this, because using GPS kills the SmartWatch 3’s battery, sucking a good 20 percent during a 40 minute session.

The SmartWatch 3’s 4GB of memory can be loaded with music, and streamed using Bluetooth to a pair of headphones. There is a problem. Transferring audio is only possible using Bluetooth, and through the Play Music app. It’s a shockingly slow process, and the watch’s battery needs to be sufficiently charged before it’ll even start.

There’s a substantial 420mAh battery inside the SmartWatch 3, which is slightly larger than the one fitted to the G Watch R, and Sony says it’ll last for two days. This is about right, but is very dependent on usage. Turn on the GPS, or use the watch to stream music, and you’ll make the day but nothing more.

While the battery is adequate, getting it charged up is the worst part of the SmartWatch 3. A Micro USB port is fitted to the rear of the Core, and covered by a small, fiddly rubber cover to maintain the IP68 rating. The trouble is, getting it out the way while struggling with the USB cord is frustrating.

Things are made easier if you remove the Core from the strap before charging, but because the Core is small, the supplied cable short, and the port a very tight fit, it’s still a real pain. Many complain about the proprietary systems on other smartwatches, but at least they’re user-friendly.

A Sony product through and through

The SmartWatch 3 is very much a Sony product. It’s subtle, stylish, extremely well made, and very functional. There’s every feature you could want, plus one or two which will come into their own in the future, as Android Wear evolves. However, it doesn’t have much character. It’s very good at what it does, but I never felt proud to wear it.

This could be cured with the addition of a brighter, or alternative style of strap, and a better choice of watch faces; but out of the box, the black SmartWatch 3 lacks some visual excitement – an important aspect of a wearable device. If you don’t mind holding out for these things to arrive, the SmartWatch 3 is a very considered choice, and with the latest specs, it will only get better.