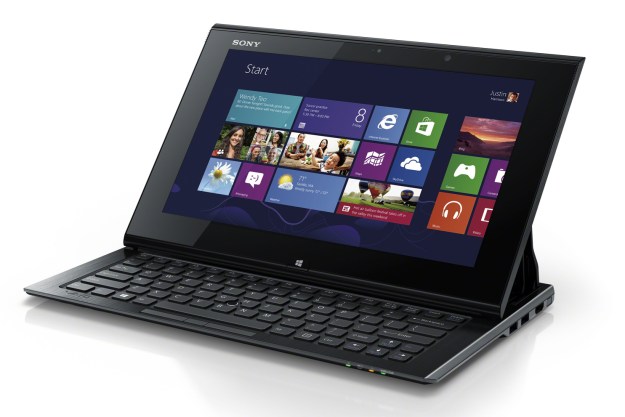 “Want to buy a convertible or a Windows tablet? Look elsewhere. The Duo 11 is overpriced, under-equipped, and frustrating to use.”

Sony is one of the oldest players in the convertible PC game. Years before the iPad’s announcement, the company was trying to break the ice with hybrid products like the Vaio UX, a have-it-all solution that featured a keyboard, mini-touchpad and a touchscreen.

The success of Apple’s relatively simple iPad stole the thunder Sony tried so long to conjure – but that hasn’t kept its engineers from continuing to try more new ideas. Sony came out swinging after the release of Windows 8 with a new slider that forgoes conventional laptop design queues in favor of the touch experience.

Underneath the new exterior, however, this remains an Ultrabook. Our review unit shipped with a Core i5 processor, 8GB of RAM, and a 256GB solid-state drive. Those are impressive specs, but do they make the Duo competent as both an Ultrabook and a tablet?

The Duo 11 is classic Sony. The design is simple, serious, and built well. Hybrids that follow the slider form factor are often annoying and flimsy; but here, with the Sony Vaio Duo 11, the sliding hinge is smooth, solid, and inspires confidence. Typing causes no wiggle, and the hinge is almost impossible to accidentally activate while using the device as a tablet.

Yet, the design suffers from two major problems. First, the display can’t be adjusted for tilt, which is an annoyance in a brightly lit room. Second, the mechanism takes up gobs of space, so there’s no room for a proper palmrest or touchpad. The Duo 11 is like a Swiss Army Knife with all the tools you could ever want. There’s just one problem; it’s the size of a brick.

This device’s tablet ergonomics deserve praise. Both the power and volume buttons are in convenient locations, but, because they’re slightly recessed, accidental activation is unlikely. Sony also designed the Duo with a tapered lower edge that serves as a grip when held in landscape orientation. However, the pointed edges are painful after prolonged use.

Though this convertible is thin, connectivity is robust. Sony has managed to squeeze VGA-out, a card reader, and combo headphone/microphone jack along the left flank while also stuffing HDMI and two USB 3.0 ports on the right. This range of options is on par with other ultra books and is superior to most convertible or hybrid devices.

The lack of a palmrest is a serious issue with all slider designs, and this Sony is no exception. Though thin, the Duo isn’t nearly thin enough to make the gap between a desk’s surface and the keyboard unnoticeable. Cramped hands and sore wrists are the inevitable result.

Sony has worsened the situation by including the poorest keyboard we can remember using (and that includes the Surface Pro!). While most small laptops attempt to maximize their limited space with wide keyboards and big keys, this laptop takes the opposite approach. Each key is smaller than normal, and a good amount of space is wasted on a functionless bezel.

Because there’s no room for a touchpad, mouse navigation is instead handled by either the touchscreen, which works well, or a small pointer in the middle of the keyboard, which barely works at all. When it’s properly implemented (as with Lenovo’s ThinkPads), we have no problem with the middle-of-the-keyboard pointer as a form of input. However, this incarnation is finicky and lacks precision. We eventually gave up on it and used touch exclusively to navigate Windows.

Oh, and there’s a stylus. It works well enough, but, as with the Microsoft Surface Pro, the device doesn’t provide a place to store the easy-to-lose stylus. Good luck keeping track of it!

Sony ships the Duo 11 with a standard 11.6-inch 1080p display that uses IPS panel technology to offer excellent viewing angles. The fact that this doesn’t impress us says a lot about how far laptop display technology has come in the last two years.

As with other Windows convertibles that serve up this many pixels, the display provides a sharp image at the expense of occasional scaling issues. Images and movies look great, but older programs are sometimes blurry or rendered with text that’s too small to easily read.

Our objective testing placed the panel near the rear of the 1080p pack. We found it capable of rendering just 73 percent of the sRGB spectrum. Contrast results were low, and black level performance proved average at best.

However, there is one area where the Duo excelled: brightness. The device beat even the brilliant Microsoft Surface Pro (by a hair), making this the brightest mobile display we’ve ever tested. You’ll have no problem using this device outdoors despite the glossy coat.

The Duo’s speakers surprised us with crisp, clear sound at reasonable volume. Though generally lacking bass, music offered decent depth and tracks with a heavy beat didn’t cause intolerable mid-range distortion. A pair of external speakers will be an improvement but aren’t necessary for enjoying media.

At 2.87 pounds, this device undercuts most Ultrabooks but still fails as a featherweight. It’s almost a pound more than the Surface Pro and almost twice as heavy as an iPad. The Duo’s heft makes it difficult to use as a tablet for long periods of time.

That being said, you may not have the chance to use it as a tablet because battery life is poor. In our tests, the system managed to run the Peacekeeper browser benchmark for only 3 hours and 38 minutes. Our Reader’s Test, which simply scrolls through a text document, extended life to an equally unimpressive 5 hours and 23 minutes. In the real world, most users will only be able to use the Duo away from power for between 3 to 4 hours.

Power draw deserves some blame. In our tests, the convertible consumed 10 watts at idle with the display at 50 percent. Bumping it up to full brightness changed that figure to 12 watts and power draw ran as high as 28 watts at full load. These numbers are a few watts more than Microsoft’s Surface Pro. Even Dell’s XPS 13 Ultrabook demands less juice.

As mentioned, the Duo has typical Ultrabook hardware, including the popular Core i5-3317U processor. In our testing, the processor performed as expected by cranking out a SiSoft Sandra Processor Arithmetic score of 38 GOPS and a 7-Zip combined score of 7,061. These figures are average for the category.

Our PCMark 7 test returned a solid combined score of 4,607. This number is lower than some other systems, including the Surface Pro, but any score above 4,000 is a good result for a tablet, convertible, or laptop. The Duo’s quick solid-state drive, powerful processor, and generous RAM make for snappy performance.

Gaming performance is another matter because of the system’s Intel integrated graphics. 3DMark reported a score of 3,650 in the Cloud Gate test, and 500 in Fire Strike test. Both numbers slightly beat the Surface Pro but don’t hold up when compared to any system with discrete graphics. Gamers will likely be unhappy with the performance offered here.

Hot, except when not

Our IR thermometer showed the Sony’s temperature swinging wildly throughout different loads. At idle, the system maintains a cool maximum external temperature of 84.9 degrees Fahrenheit; but at full load, the bottom can reach a toasty 110 degrees. The device can become uncomfortable to hold when the processor is taxed.

A lazy system fan may contribute to these numbers. At idle, the fan didn’t produce enough sound to register above ambient noise on our decibel meter. We picked up 41.1 decibels at moderate load, and full load generated 44 decibels. Both numbers are lower than average among Ultrabooks and PC tablets. A faster fan would produce lower temperatures at the expense of more noise.

We’re not a fan of sliders at Digital Trends. Because they lack the functionality of a standard laptop yet also remain too heavy for comfortable tablet use, sliders have so far proven that they’re the worst form of convertible PC we’ve seen.

Sony’s Duo 11 makes no attempt to reconcile these problems. Instead, it worsens them with a terrible keyboard and nearly useless pointer. The interface issues are bad enough to make the Duo a convertible in name only. Yes, it can be used an Ultrabook – but no one would ever want to use it this way.

The rest of system does nothing to make up for these shortcomings. As a tablet, the Duo is too heavy, too large, and offers too little endurance. Even the display, though bright and sharp, falls short of the best competitors.

Are there any positives? Well, connectivity is decent, audio quality is good, and the display is extremely bright. These aren’t trivial points, yet they’re all washed away by one final concern: price. Our review unit retailed at $1,399. That’s almost $300 more than the Microsoft Surface Pro 128GB with keyboard cover included.

Want to buy a convertible or a Windows tablet? Look elsewhere. The Duo 11 is overpriced, under-equipped, and frustrating to use. Even Microsoft’s lackluster Surface Pro is a better – though not great – choice.