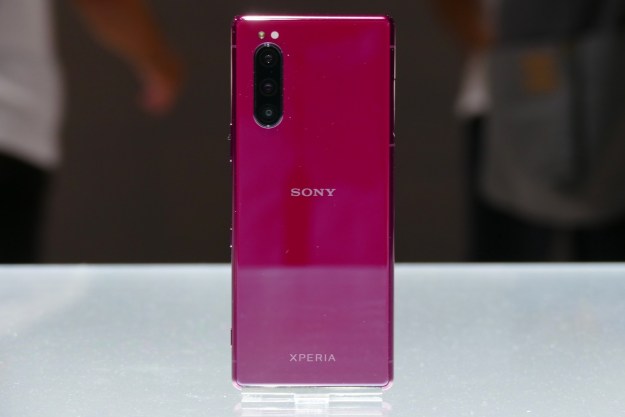 Sony Xperia 5 hands-on review: Compact, colorful, but not quite a winner
MSRP $800.00

“Sony's Xperia 5 wins us over with its design and size; but there are concerns over the camera and a true reason to buy.”

The Sony Xperia 5 is the wonderful return of the compact flagship smartphone; a true successor to the much-loved and mostly-deceased Compact series of Sony phones that packed winning specs into a smaller, more easy-to-handle body.

But the Xperia 5 is only It’s halfway there: there’s nothing small and manageable about the expected 800 euro price, which means it’ll likely be around $800 in the U.S. when it eventually goes on sale. While you get the power and performance you’d expect for this price, the Xperia 5 struggles to make itself known in a sea of strong competitors.

I love the 21:9 aspect ratio screen Sony has chosen for its most recent phone releases and pairing it with the Xperia 5’s small screen makes this a joy to have in the hand. The body is so easy to hold, making Twitter scrollable without having to stretch or juggle the phone. Yes, you have to scroll a bit more because the screen is thinner than others, but it never becomes a problem.

My thumb easily reached across the screen too, something that rarely happens with today’s larger devices. Speaking of the screen, the 6.1-inch OLED panel is almost perfect, with stunning color reproduction and contrast from the test images I saw on a demo unit.

The screen is a reason to buy, provided you can get past the unusual ratio, which doesn’t really have many uses. It’s supposed to be great for watching 21:9 video, but in my experience, there isn’t much content out there, so the true benefits are not often realized.

It has HDR and DCI-P3 support, which alters the colors to make them more cinematic. Sony wants you to watch movies on the screen, and it’s certainly great when you do, but you can’t be too picky about the title if you want to watch one in 21:9.

Another reason to buy is the beautiful colors Sony has chosen for the Xperia 5. The glass rear panel comes in a wonderful deep red color, a blue, a stylish white/grey, and a normal black. The red is the one to choose, as it’s a real beauty. At 8.2mm thick and 164 grams, the Xperia 5 is the ideal phone to slip into your pocket and not notice it’s there.

The screen isn’t massive so the body isn’t too long, a problem I experienced with the Xperia 10 Plus. The Xperia 5 is almost 10mm shorter than the 10 Plus, and that makes a big difference when you carry the phone around.

The fingerprint sensor is on the side of the phone, a position I find natural and easy to locate. However, Sony insists on not making it the power key as well and puts a separate power button under the fingerprint sensor. Above it is a volume rocker, and right at the end of the body is another button to activate the camera, that also works as a shutter release.

It’s a lot of buttons, and not making the fingerprint sensor turn the phone’s screen on and off adds an annoying extra step. The Honor 20 Pro does it without fault, so it’s not like it’s an impossible request.

Recently, Sony’s phones have not impressed us with the camera ability. I did try out a couple of the special features though. The eye-tracking mode — also known as Eye AF — works when taking stills, and maintains focus on your subject’s eyes, which in turn ensures their face is in focus.

In the well-lit demo area, it achieved this effect well with a relatively slow-moving subject and even worked in burst mode too. I like this feature and can see it being useful for taking photos of people at events or on stage when the focus can unexpectedly shift and ruin a shot.

.Spending this much money on a phone and be disappointed by the camera shouldn’t happen.

I also tried out a manual mode for stills and shooting video, which provides extensive control over different settings including color management. It’s undoubtably comprehensive, but it’s also complicated, and only likely to appeal to serious photographers.

The rest of the Xperia 5 specification is good. It has the Snapdragon 855 processor, 6GB of RAM, 128GB of memory, a MicroSD card slot, water and dust resistance, and stereo speakers. It sadly launches with Android 9 Pie, not Android 10, so you’ll have to wait for an update, and there’s no word on when it will come.

Why isn’t the Xperia 5 the new compact Sony phone of choice? The price is a problem, especially when previous Sony efforts have not won us over with the camera. Spending this much money on a phone and being disappointed by the camera shouldn’t happen, especially when the OnePlus 7 Pro costs less and has an ever-improving camera.

That’s before getting to the equally capable Galaxy S10, the , and the . There’s a lot of choices out there for the same money or less.

There’s plenty to like about the Xperia 5, but there’s not quite enough to make it stand out against these other phones. The size and the lovely colors are the main reasons to pay attention; but the camera needs to perform way better than other Sony phones recently to turn this interest into a compelling reason to buy. We’ll know more about the performance of the camera when we test the phone further, and hope that it surpasses our expectations, because the Xperia 5 definitely has potential.