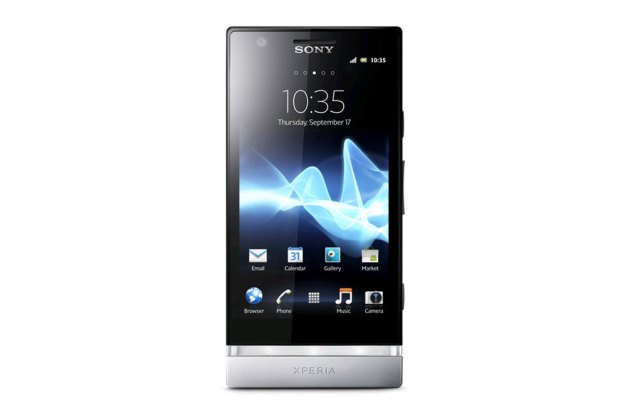 “Assuming the update to Android 4.0 comes through for everyone with the P (some users have gotten it already), it could be a good option for those looking for a smaller handset.”

This year has been a big one for mobile at Sony. After a decade of producing mobile phones in partnership with Ericsson, the Japanese company officially took over the joint venture in early 2012 and began marketing its first phones under the name “Sony.” The Xperia P is the middle child of a trio of new Android phones from Sony. It’s not the top of the line or largest, but it isn’t the smallest either. And like every middle child, it’s going to catch flak from both ends. Read on as I try not to give the P too much of a complex.

With a scant 4-inch screen, the Xperia P is smaller than your average smartphone these days, with the notable exception of the iPhone 4S, which is smaller still. While a 4-inch screen will feel cramped to some of you, others might be relieved to see a smartphone with a screen that isn’t pushing 5 inches.

Though it’s petite, the P’s size makes its boxy, futuristic design more charming than larger Sony devices like the Xperia Ion. Our review unit had a sparkly silver finish to it, which classes up Sony’s love for straight lines. It also comes in red and black. Though I wasn’t particularly kind to the design of the Ion, the entire look and feel is more cohesive in the NXT trio of phones, including the P. This comes at the cost of battery access. Like the iPhone, you cannot manually swap your battery.

The face buttons — back, home, menu — are almost magically placed inside a strip of clear plastic along the bottom of the phone, which is strange, but they work, so who’s complaining? Most of the rest of the controls are along the right side. Thin, stylish camera, volume, and power buttons adorn the side, along with a single speaker — there’s no matching left speaker, if you’re wondering. The speaker gets quite loud, but does tend to break up a bit at high volume, and its placement is exactly where the power button probably should be, forcing it into an abnormally low position about a third of the way down the phone. The low power button also made it awkward to reach for the volume key. This won’t be a problem for those with smaller hands, but I’m no Andre the Giant, so you may want to hold this phone before committing to purchase. All three of these buttons are also a hair on the thin side, making them somewhat uncomfortable to press even if you can stretch your thumb to reach them.

On the left side of the phone is a micro SIM tray along with Micro HDMI and Micro USB ports. The headphone jack is on the top right.

Overall, the Xperia P looks nice and represents an improvement over the Ion, but has some issues with button placement.

Though Android 4.0 updates are rolling out to some Xperia P users, we have not gotten ours yet, leaving our Xperia P with the rather old and outdated Android 2.3. If you only care about appearances, however, this shouldn’t bother you. Sony has managed to spruce up the user interface, adding its trademark blue, black, and white design. We don’t have many complaints, except that you will want to avoid moving background images as they’ll gum up the works and lag the phone down. Just as on the Xperia Ion, Sony’s interface is clean and easy to navigate. If you’re shopping for an Android phone, this one shouldn’t screw with your expectations too much.

Connecting the phone to a Mac did present problems. If you have a PC, you’re covered as the Ion comes with PC software pre-loaded, but Mac owners, you’re out of luck. Even with the official Android File Transfer software, I was unable to connect the Xperia P to a MacBook Air to transfer files. Perhaps Sony has ceded MacBook Air owners to the iPhone?

The Xperia P doesn’t come with much in the way of custom software, which is mostly a good thing — download all you want from the Google Play store. It does come with a few things like a custom update app, a Power Saver app, and WhatsApp. Nothing much to get worried, or excited, about. If the P gets picked up by a U.S. wireless carrier, expect more bloatware.

The most impressive thing about the Xperia P is its screen, but not in a way the traditional specs would reveal. Though it measures only 4 inches across and has a 540 x 960 pixel resolution, I haven’t ever used a phone with a brighter screen. Thanks to new “WhiteMagic” LCD technology, the P displays whites that are brighter than a commercial for Tide detergent. It’s a lovely screen, though it doesn’t have the wow factor that an AMOLED screen can have.

The rest of the specs are more ordinary: The P has a 1GHz dual-core processor, 1GB of RAM, 16GB of internal flash memory (no microSD), an 8-megapixel rear camera, a VGA (particularly lame) front-facing webcam, NFC, GPS, Bluetooth 2.1 (old), Wi-Fi, and most other common features and sensors.

As for Quadrant, our trusty little benchmarking test, the Xperia P performed rather poorly, scoring only a 2,400, a bit under the Galaxy Nexus, but far worse than newer phones like the HTC One X and Galaxy S3, which both scored around 5,000. What does this mean to you? Not much, but if you’re buying a phone for gaming or have any plans to really push your smartphone to the limits, opt for another device.

The Xperia P’s 8-megapixel camera does its job. The photos in the comfort of our cushy office in downtown Manhattan came out all right. Not great, mind you, but not bad. It had some issues focusing in areas of high light, sometimes getting itself stuck in an endless loop of refocusing on light sources, but mostly, it works. Outdoor shots look particularly nice, and the P picks up a good amount of detail. Just don’t expect it to match or outperform top competitors like the iPhone 4S, HTC EVO 4G LTE, and One X.

On a sadder note, though all front-facing cameras seem to be crappy these days, Sony has gone bottom of the barrel here with a VGA camera only capable of 640 x 480 pixel pictures. Pictures from it will be smaller than those you’d probably see on Facebook these days.

Voice reception has been decent in NYC, and calls have been exceptionally clear on both ends. Conversations were easily understood on speakerphone as well. I did have a problem with the phone app not responding once a call was over (I couldn’t hang up), but that only happened one time. The texting app works fine, and is in the style of the iPhone, with little chat bubbles for you and the person you’re texting. Only the tiny size of the keys on the touch keyboard presented an issue.

The version we’re running is unlocked and running on AT&T’s 3G network. The Xperia P is not currently being sold by any U.S. wireless carriers.

Battery life has not been a big issue, likely because the P doesn’t connect to LTE and has a modestly sized screen. Expect to charge the phone every night, as usual. According to Sony, the upgrade to Android 4.0, whenever it comes, will boost the standby battery life of the P, so more improvements will come. The P also comes with a Power Saver app, which will help conserve battery life in tight situations by turning off non-essential features.

The Xperia P is not a record-setting handset, though it’s WhiteMagic screen is certainly a winner in my book. The design is clean and the hardware is fast enough to satisfy most users. Assuming the update to Android 4.0 comes through for everyone with the P (some users have gotten it already), it could be a good option for those looking for a smaller handset. Phones keep getting larger and larger. It’s good to see a solid phone in a smaller size.