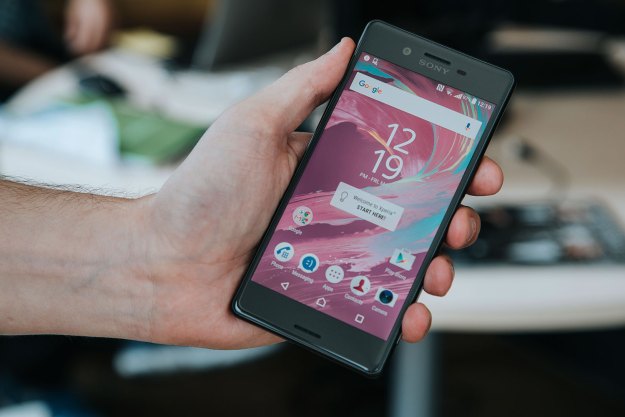 “Sony’s Xperia X is a great phone, but it’s just too expensive to recommend.”

The Xperia X might be the most comfortable Sony phone I’ve ever held. It retains many of the best design elements we’ve come to like in Sony’s Xperia Z phones, but sheds a lot of the baggage, too. Unfortunately, as much as I like it, the $550 price is just too high. You can get better (or equal) phones for hundreds of dollars cheaper.

So far, we’ve tested the standard Xperia X: Sony’s middle of the road model, and the first one to hit the United States. Two more models — the weaker XA and the more powerful X Performance – will hit shelves later this summer. They look mostly identical on the outside, but have some differences on the inside.

What’s good about its design

Sony has really stepped up its design with the Xperia X. At first glance, it may look like older Xperia Z phones, but there are some nice upgrades that make it a lot more comfortable to hold. The first change is screen size. By shrinking it from 5.2 to 5.0 inches, the phone feels a lot more comfortable in your hand (this, of course, depends on your hands). In our experience, the size better matches the iPhone 6S, which makes it a good alternative to many of the giant phones on the market.

The breakable, slippery, fingerprint-prone glass on the back of the phone is also gone now, replaced with a metal backplate. The sides are curved polycarbonate, but so closely resemble metal, we couldn’t tell. Those plastic sides eliminate nearly all seams and make it softer to hold. And despite having a 23-megapixel camera, the module sits almost flush on the upper left corner of the phone.

On the front, the glass now curves over the edges. This makes it look nicer, like the iPhone, but will also make it a little less durable. We recommend investing in an Xperia X case, if you buy the phone.

Sony’s button placement, like the Z5, is odd, but works. All buttons are on the right side, starting with a large power button in the middle, then under it a volume rocker, and under that a camera shutter button. Yes, Sony is one of the only companies that puts a shutter button up there, but we like it! Holding the shutter button will automatically open the app.

On the left side, a pull-out drawer hides both MicroSD and Nano SIM cards. Unlike the iPhone and other devices, you do not need a paperclip to open this tray — another subtle perk. The extra color choices – white, lime gold, rose gold, and graphite — are also nice.

There are a few features you may want that are missing or in odd places on the Xperia X.

If you live anywhere outside the United States, your power button will double as a fingerprint sensor. Sadly, and for what we only assume are legal or security reasons, Sony has disabled this feature on the Xperia Z5 and now the X Series phones. Representatives told us this feature is something Sony wants to include in future devices but just didn’t have “enough time.” Sad.

Now that most phones sport fast fingerprint sensors, we’ve been very annoyed having to go back to unlock a phone with a PIN code. You really need security on your lock screen, so if a PIN doesn’t work for you, we suggest buying another phone.

If you’re expecting the Xperia X to be IP68 waterproof like the entire Z series, have a seat. I have some bad news for you. Sony is only waterproofing the more expensive, $700 Xperia X Performance, from what we understand. So this is yet another phone that should stay in a dry place at all times. We have no idea how water resistant it is, but it hasn’t passed any tests to prove so.

For some reason, Sony still places the audio jack on the top of the Xperia X instead of the bottom, where most other phones now sport it. A jack at the bottom makes it easy to naturally pocket your phone with headphones still connected.

Finally, the speaker quality on the X is also weak. It doesn’t match the volume of an iPhone or high-end Android and sounds tinny. No phone has good sound, but we’d rate the X lower than others, especially quality handsets like the HTC 10.

In a change of pace, Sony has scaled back its software. The X comes with an almost pure Google version of Android 6.0 Marshmallow. This is fantastic because the standard Googley version of Android looks pretty damn good these days. Sony has made a few improvements in simple ways, which we like. For example, you can swipe down on the home screen to search through your apps. Or, if you go into the apps menu, you can see recent apps and even hold down to make it possible to delete any app with one tap. Both of these features are very iPhone-like, but helpful.

Sony should also get a medal for flexibility: You can delete almost any non-essential app, including many Sony and Google apps. This doesn’t quite make it easy to deal with the nearly 12GB of storage space taken up by basic services, but it’s a good start.

Sony’s themes and wallpaper choices also aren’t too bad. We didn’t mess around much, but it’s always good to have a few choices.

In an effort to combat the lack of a fingerprint sensor, I turned on a hidden feature in Sony’s settings menu to turn on the screen with a double tap. This feature is nice, but the phone started opening up randomly in my pocket. I had similar problems with Sony’s trusted device/place software, which couldn’t reliably tell if I was home or at work, forcing me to unlock with a PIN code all the time.

Sony has made an effort to update many of its phones in the last two years to Android 6.0 Marshmallow, and we hope it will keep that promise going to Xperia X owners, and also deliver regular security updates. As it stands, we’re not sure.

The cameras on the Xperia X sound amazing on paper. On the back is a 23-megapixel f/2.0 shooter and on the front a 13-megapixel selfie cam. Like most mid-range phones these days, both cameras get the job done and are comparable to offerings from other manufacturers. But if you’re looking for a really good camera, don’t let the megapixels fool you. Sony’s cameras still don’t match the Galaxy S7 or iPhone 6S in our tests.

The selfie cam tends to have slow autofocusing at times, and doesn’t quite match up to the 5-megapixel shooter on the Galaxy S7. Meanwhile, in low light, the Xperia X tends to really take some screwy shots. Most of our low-light shots either turned out way too blue (if natural window light was involved) or too blurry and blotchy. That’s not to say the iPhone turned out shots much better, but Apple’s shots do tend to match reality more than usual.

Oddly, Sony sets the rear camera to 8-megapixels by default, likely due to the lack of storage space in the X, but you can adjust it in settings. We like the optional filters and manual mode, but the default Intelligent Auto+ mode does make some mistakes from time to time.

Again, in normal light and most conditions, this camera holds up. It’s certainly up to par with a Motorola device, but we’re hoping a better processor helps the Xperia X Performance work its photos with more clarity.

Fingerprint issues aside, weak specs are ultimately the reason you should consider another phone. It runs perfectly and I’ve had no slow down, but under that glossy exterior is an aging processor.

The Xperia X runs on a Qualcomm Snapdragon 650 chip with 3GB of RAM. In our 3D Mark benchmark tests, the X got about an 18,200 on the Ice Storm Unlimited test and 850 on the newer Slingshot test, putting it in line with many high-end 2014 phones, including the HTC One M7/M8 and LG G3. In Geekbench, it had scores that put it about on level with last year’s Galaxy S6. This worries us. It means the shelf-life of your Xperia X, despite its high $550 price, may be less than other comparable phones.

The Xperia X is good looking, runs Android 6.0 Marshmallow OS, and is comfortable to hold.

Some positives: The MicroSD card slot means storage isn’t as big a problem as it is on other phones, and we’re big fans of the 5-inch 1,920 x 1,080 pixel IPS LCD screen. There’s just no real need to have more pixels because they harm battery life. And on that note, battery life for the non-removable 2,620mAh battery is pretty good! After several days of stress testing, the battery still ended the day at 13 percent at its lowest. On a normal day, you should end with 20-40 percent battery life, and Sony’s battery-boosting modes do seem to really help in a pinch.

Call quality is normal, though we’ve had a couple out of the ordinary unclear calls in our first couple days. It’s not a consistent enough problem to knock the phone yet, since our service provider, T-Mobile, is affordable but not always the clearest. Since you have to buy it unlocked from Sony, Best Buy, Amazon, or other online retailers, you can only use the Xperia X on T-Mobile and AT&T.

Sony offers a normal one-year limited warranty that covers manufacturer defects, but not issues caused by dropping damaging the phone yourself.

Sony’s Xperia X is a good looking phone that runs an up-to-date and easy-to-use Android 6.0 Marshmallow OS, and it’s comfortable to hold. The camera isn’t perfect, but is also very good and the shutter button is a nice touch.

But at $550, and more in euros, you can do a lot better with your money. The Snapdragon 650 processor in the X is weak compared to other phones in the price range, like the Nexus 6P, which also has a fingerprint sensor – something the X lacks in the United States. Google also offers immediate updates, but Sony’s update record is spotty. The Moto X is also down to $300, but has a better processor, larger screen, and some nice customization options.

The Xperia X Performance may be a better pick, but we haven’t been able to review that yet. It will start at $700 and have the new high-end Snapdragon 820 chip in it and a few other upgrades, though it will look just like this phone.

Looking to save even more? You can read up on some of our other favorite cheap phones here.