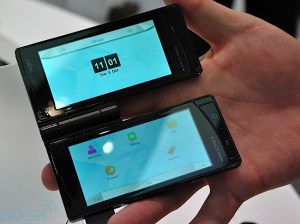 Remember the days when new cellphones were judged by the oddball, borderline useless features each one possessed? Sprint is about to get the ball rolling again. The wireless carrier will hold an event in New York City at 6 p.m. EST this afternoon and, according to the Wall Street Journal, the operator will unveil a new dual-screen touch Android phone by Kyocera, which is more commonly known under its Sanyo brand here in the United States.

The new device, which could look like the Fujitsu prototype phone on the right, is said to be called the “Echo” and will feature two 3.5-inch touchscreens that can be displayed side-by-side or in a tucked format, one under the other. Rumors point to the ability to drag items from one screen to the other and interact in other unique ways. The device is reportedly 3G-only and will not take advantage of Sprint’s 4G WiMax network.

The screens are connected via a “pivot hinge” of some kind. We don’t know if they can be arranged in different ways or what version of Android the device will be running. While we haven’t seen a dual-screened phone in some time, NEC did show off a dual-screened Android tablet at CES this year, which had some interesting use scenarios. The screens on that device could be used independently or sync up to become one large screen, which was good for reading books, or working in a calendar, etc. Theoretically, it could let you watch a movie while browsing the net or writing an email. The Nintendo DS, of course, has hundreds of well executed games that utilize two screens as well.

The main concerns will be power, price, and construction. Often, gimmicky devices don’t hold up well in real-world use and look much cooler on stage and behind glass than they feel when you’re forced to use them on a daily basis. Let’s hope Sprint is trying to do more than wow us with a gimmick. We’ll have hands-on impressions later tonight.