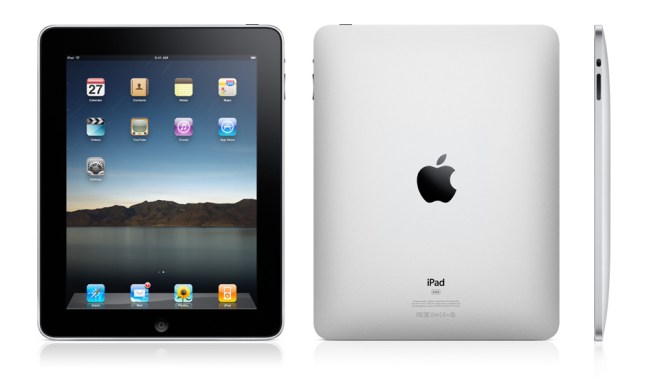 You know that kid in high school that would totally talk a big-game but couldn’t quite deliver? Like that time he stood on his desk in fifth period English and promised you all he was going to throw the most stellar graduation party: He says he’s going to have it at the Yerba Buena Center in San Francisco and everyone will be invited and it’s going to be the most revolutionary party ever. When graduation time rolls around the rumors about the party are buzzing, but only a couple of your classmates get invited. As it turns out, the kid was all talk— sure the party was still fun but it was not the outstanding fiesta he alluded to.

Apple was totally that kid yesterday.

Most people walked away from the Apple event at the Yerba Buena Center in San Francisco a little disappointed with Steve Jobs, his company and the new iPad tablet. Stay in your seats Apple fanatics and don’t let the introductory analogy fool you—this is not an Apple bashing. According to the industry pros, the iPad is an amazing piece of hardware and software, but it was not the revolutionary device that Apple had promised. Dylan Tweney, Senior Editor of Wired.com, says he was quite impressed with the iPad but still thought it fell short of “being the revolution we expected.”

“At this point it’s basically an inflated iPod Touch, and while that’s nice, it’s not totally different from anything that’s gone before,” says Tweney. He says that even though Apple was right on with the starting out price for the device, the price will have to come down even further before mass adoption really kicks in. Tweney attributes the price of the tablet as the key factor for it to have a wider impact on things like app design, website design, e-book sales, digital magazines, etc.

To further the disappointment, other analysts have also noted they too are extremely dubious of the iPad’s price. Our own industry expert Scott Steinberg says he remains skeptical of Apple’s initial asking price for a 16GB iPad. These days 16GB won’t get you very far—and for a $500 product you’re going to want to protect that pricey piece of hardware and spend more money on covers, cases, and perhaps even upping the specs just to make your new Apple purchase more worthwhile. “You’re going to need to buy accessories and upgrade the memory because 16GB is super low,” says Steinberg. “It’s very sexy and functional, but I’m hesitant– it’s concerning that they’re asking users to pay $500 minimum for a device that doesn’t to deliver a tremendous amount of value.”

Phillip Swann, President and Publisher of TVPredictions.com, claims he will not buy into the iPad madness because it doesn’t seem to “fulfill any need or add convenience” more so than other devices.  Swann also thinks the iPad also may be too “tough to lug around,” as opposed to an iPhone or another smartphone that can give you similar functionality. He also says he is does not believe the device will do well in the mainstream market.  “Sign the iPad is in trouble: the media is expressing doubts when usually it slavishly backs everything Apple produces,” says Swann.

Apple did not display any outstanding apps or functions on Wednesday–in fact, Apple barely surprised us at all. Most people were waiting for Steve Jobs to show off a hologram function—where a holographic unicorn comes charging out at the audience—but that did not happen. Most of the surprise came from what the iPad couldn’t do, rather than what it could.  Steinberg was surprised Apple did not provide any sort of on-demand video content on the iPad; it’s missing video conferencing and on-demand content, both which Steinberg claims would have been immediate game-changers.

One thing Apple did do was create excitement and further mass appeal for the tablet PC category. On a more “revolutionary” note, the iPad’s functions definitely took the wind out of the sails of some prominent categories like mobile gaming and e-Readers. Most experts think that Apple laid a fabulous foundation for tablet devices and the iPad to build upon, allowing room for these technologies evolve further into the future.