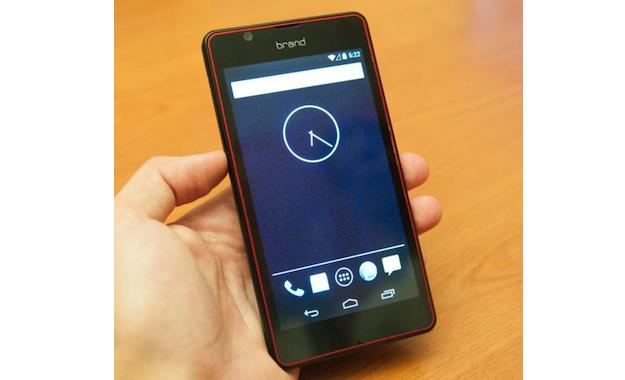 Component manufacturers often build phones to show off what their products can do to help drive sales. These devices, sometimes known as reference phones, have appeared in the past, most notably in Intel’s case, as its first Medfield reference phone went on to become the Orange San Diego and the Lava Xolo X900.

When Nvidia first announced the Tegra 4i processor, it also discussed a reference phone codename Phoenix, which has a 5-inch, 1080p screen all wrapped up in an 8mm thick chassis. It was shown off at Mobile World Congress, where Nvidia confirmed it was looking to sign up manufacturing partners to use the Phoenix design. Now, a second Nvidia reference phone has been spotted, and Nvidia has similarly ambitious plans for it.

It has been seen by Anandtech.com, but it doesn’t have a cool codename, and instead wears “Brand” branding, so is clearly being used to entice manufacturers into licensing the device. It’s not as high-end as the Phoenix either, as it has a 4.8-inch touchscreen with a 720p resolution, but the Tegra 4i chip is inside and has 1GB of RAM, plus 4G LTE and HSPA+ connectivity. The chassis measures 7.9mm thick, and there is an 8-megapixel camera mounted in the top left of the device’s rear panel.

Nvidia apparently wants to get this unbranded model, along with the Phoenix, on sale during the first three months of next year. According to the report, it will be priced at around $300 to $400 without a contract, and Nvidia is also preparing an even cheaper, $200 device too.

The Tegra 4 hasn’t been seen in any smartphones yet, although we’re expecting something from ZTE in the near future, but it has recently appeared in several tablets, including those from Toshiba, and the new Asus Transformer Pad Infinity. With three reference phones now doing the rounds, it seems Nvidia is being proactive in speeding up the Tegra 4 and Tegra 4i’s adoption by phone manufacturers.

4th of July Mattress Sales: Get a Casper for $195 and more