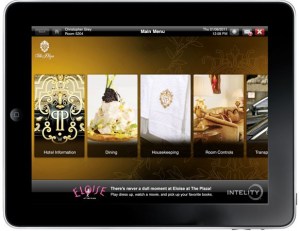 These days, most of us are lucky if we land a hotel room that comes with complimentary Wi-Fi access. But guests of The Plaza hotel in New York City get something even better: an iPad.

According to Luxist.com, the Apple tablets come loaded with Intelity’s ICE (Interactive Customer Experience) software, which allows the 5-star hotel’s pampered guests to order room service, request wake-up calls, or browse NYC travel guides, among other things. Guests can even adjust their room’s lights and temperature controls directly from the iPad.

So, how did such a perk end up in one of the country’s most famous hotels?

“We chose the iPad because it is a great piece of equipment that is here to stay and won’t disappear tomorrow,” Shane Krige, general manager of The Plaza, tells Luxist. “It brings another five star element to the hotel.”

Guests of The Plaza will also be able to access the hotel’s Virtual Concierge Application through ICE Mobile, which is available for download through iTunes for the iPhone, Blackberry and Android handsets.

As convenient as it may be for guests, the high-tech functionality isn’t only for them. By funneling guest service requests through the ICE system, the hotel’s managers are also able to better track how well their business is running, and make the system more efficient. “If you order a pair of slippers, the request will go directly to the slipper department with no intermediary,” says Krige. “The requests go directly to the end producer, so that they can be very efficient.”

Those guests who want a more human connection with their hotel experience need not fret, however. “[The iPads] are not meant to replace our concierge service and the personal touch we are known for,” says Krige. “It is to provide more choice. At a five star hotel you should have choices — if you want to use the iPad, you can do so. If you want a butler service, that is available, too. If you want to be left alone, that is a choice, as well. By putting the iPads in the guest rooms, we are bringing a new technology to everyone’s fingertips.”