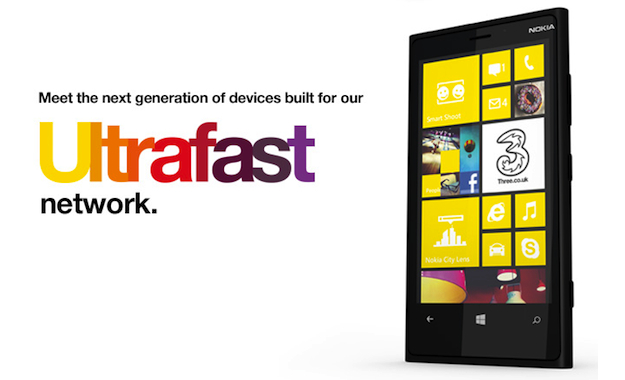 Mobile network Three UK has caused a stir by announcing it intends to offer its 4G LTE service at no extra cost to its subscribers later on this year. This goes against EE’s decision to make 4G a premium option, and also indicates Three is prepared to offer an unlimited data allowance for 4G, which is missing from EE’s tariff selection.

Three’s 4G data will automatically be added to its plans without the need for any alterations, or any SIM card change, provided they already own a 4G compatible phone. Three already sells the 4G-ready iPhone 5, Lumia 920 and Xperia Z, and will soon be adding the Galaxy S3, Galaxy Note 2 and BlackBerry Z10 to the list.

Dave Dyson, Three UK’s CEO, is quoted in the official press release as saying the firm, “Thought long and hard,” about how to deal with the issue of pricing, before coming to the decision it, “didn’t want to limit [4G data] to a select few based on a premium price and we’ve decided our customers will get this service as standard.”

Currently, EE has the monopoly on 4G LTE data in the UK, but its high prices and low data allowances haven’t endeared it to customers. While Three’s monthly tariff costs aren’t all that different from EE’s, even its basic packages have unlimited data, making them considerably better value for anyone wanting to take advantage of the faster data connection.

For example, a 16GB iPhone 5 on EE’s cheapest 4G tariff costs £99 and £36 per month with 500MB of data and unlimited calls and texts. On Three, the phone still costs £99, but the monthly price is £34 with unlimited data, 500 minutes and 5,000 SMS. Let’s face it, anyone wanting a 4G connection is more likely to be more interesting in data than calls, making Three not only more attractive, but also worth waiting for – bad news for EE all round, then.

Sadly, Three isn’t going to be switching on its 4G network until the second half of 2013, and there’s also no word on coverage either. EE continues to expand its 4G coverage map, but initially it was only available in a handful of cities. Whether Three will be equally as restricted isn’t known.

What about Ofcom’s auction?

The story may not end there though, as Three points out its 4G service will use the 1800MHz spectrum, which is the same frequency EE uses for its 4G network. What’s more, Three’s 1800MHz spectrum was purchased from EE, after Ofcom forced it to sell some off following the merger of Orange and T-Mobile (to create Everything Everywhere, which has now become known as EE) in 2010.

But why does Three make a point of mentioning the spectrum it’s planning to use for its freebie 4G upgrade in the press release? Could it have something to do with the major 4G auction being held in the UK? Ofcom is selling spectrum in the 800MHz and 2.6GHz bands to all major UK networks – including Hutchison 3G, which owns Three UK – for the purposes of launching a nationwide 4G network later this year.

We were concerned the 1800MHz freebie 4G would later be joined by a premium option using the improved 800MHz/2.6GHz frequency, so we contacted Three for a response. Unfortunately, an official statement wasn’t provided, however it was indicated Three won’t be distinguishing between different frequencies – so free should mean free, regardless. Without official confirmation though, we’re still a tiny bit skeptical.

That said, Three’s pricing commitment should see EE feel the pressure, and it will surely influence Vodafone and O2’s 4G pricing structure. Who’ll be next to talk 4G pricing in the UK, and will anyone feel the need to drop the price to compete?

Video-editing app LumaFusion to get a Galaxy Tab S8 launch
T-Mobile’s 5G Ultra Capacity network has four times the coverage of Verizon and AT&T
5G Nationwide vs. 5G Ultra Wideband: What’s different (and why you should care)
T-Mobile’s 5G and 4G LTE networks are nearly twice as fast as Verizon and AT&T
Verizon’s new Welcome Unlimited plan makes 5G data a lot more affordable
Experts warn AI assistants are hurting the social development of children
Google gives Maps’ Immersive View a boost and adds a new vibe feature
What to expect from Google’s October 6 event: Pixel 7, Pixel Watch, and more
iPhone 14 Pro vs. iPhone 14 camera battle shows why small details matter
How to hide photos on your iPhone with iOS 16
Does the iPhone 14 have an always-on display? Know this before buying
Reverse wireless charging on the iPhone gets one step closer to reality
The OG App, an ad-free Instagram client, is no longer on the App Store