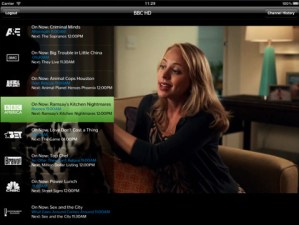 Media behemoths Time Warner Cable and Viacom Inc have filed lawsuits against each other over an iPad app that allows users to stream live TV, the Associated Press reports.

The companies have asked a New York judge to decide whether Time Warner has the right to distribute channels on its cable network via the Apple tablet, rather than through a traditional TV set, without negotiating additional deals with the cable networks.

Time Warner was forced to pull 11 channels from the app after complaints from the parent companies. Those channels include Viacom’s MTV, VH, Nickelodeon, and Comedy Central, as well as channels owned by News Corp and Discovery Communications. (For a full list of omitted channels, click here.)

These companies claim that porting TV to the iPad is a violation of their programming contracts. They are seeking to negotiate new contracts with Time Warner to allow the cable provider to stream their shows onto the iPad.

Viacom argues that Time Warner owes them more money for the “substantial and irreparable injury” to business caused by the app, which Time Warner says has been downloaded over 360,000 times.

Time Warner, conversely argues that it shouldn’t make a difference what category device they broadcast to, and that customers should be able to watch its programming on whatever screen they choose.

“We have steadfastly maintained that we have the rights to allow our customers to view this programming in their homes, over our cable systems, without artificial limits on the screens they can use to do so, and we are asking the court to confirm our view,” said Time Warner executive vice president and general counsel Mar Lawrence-Apfelbaum in a statement on Thursday.

Another cable television giant, Cablevision, recently launched its own iPad app for streaming programming. The Optimum app offers users 300 channels, and allows for up to three iPads to be used on a single account. It is not yet clear whether Cablevision will receive the same kind of objections brought against Time Warner. Considering they are offering nearly identical services, however, such opposition seems likely.

Video-editing app LumaFusion to get a Galaxy Tab S8 launch
Apple Cyber Monday Deals: Apple Watch, AirPods, iPad, MacBook
Best Cyber Monday iPad Deals: iPad Air, iPad Pro, iPad Mini
Don’t buy the wrong iPad during Cyber Monday — get this one instead
You won’t believe how cheap this iPad is, thanks to Cyber Monday
Save $70 on the Fitbit Versa 4 when you buy it today
My favorite phone of 2022 didn’t come out this year — it’s from 2021
Twitter’s downfall made me look for alternatives, but they just made it worse
Apple Music Sing brings karaoke singalongs to iPhones, Apple TV
How to buy over-the-counter hearing aids
Why the lawsuit against Apple’s AirTags may be bigger than you realize
Don’t miss this Apple Watch Ultra deal
Apple to use made-in-America chips for iPhones and Macs