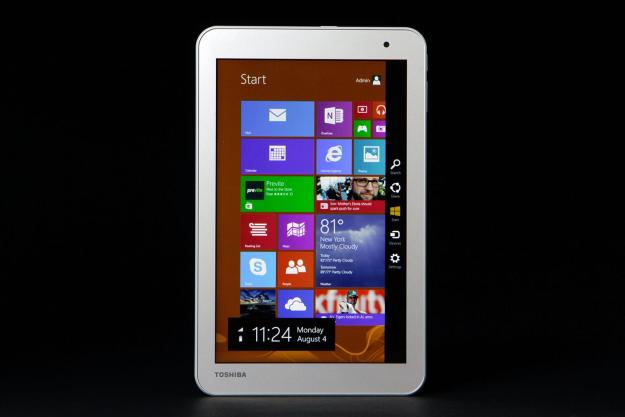 “Toshiba’s latest Windows tablet looks good, especially considering it’s selling for under $200. But despite a nice screen, its performance is hindered by a lack of RAM, leading to occasional slowdowns and hang-ups.”

(There is also a 10-inch version. This review is for both.)

Device makers continue to push Windows 8 tablets as an alternative to their more popular Android and iPad counterparts. The 8-inch Toshiba Encore 2, with its $200 price tag, is at least competitive when it comes to price.

The inclusion of a year’s subscription to Microsoft’s Office 365 adds some extra value to a Windows tablet that’s already available for as low as $180 on Amazon.

If you want 2GB of memory, along with double the internal storage (64GB), you can pick up the 10-inch version, direct from Toshiba for $280. But the larger model’s screen still sports the same 1,280 x 800 pixel resolution, which is bound to look worse on a larger display.

Is the Encore 2 worth it, and how does it stack up against other small Windows 8.1 tablets like Dell’s Venue Pro 8? Find out below.

Plain, but not ugly

The Toshiba Encore 2’s shell looks like it’s made of silver aluminum, but the sides and back are made of plastic. Still, the tablet feels solidly constructed, and the curved back feels comfortable in the hand. But at 0.37 inches thick and 0.84 pounds, the Encore 2 isn’t overly thin or light.

The tablet’s shell looks like silver aluminum, but the sides and back are actually plastic.

Button and port layout is mostly focused around the top of the device (when held in portrait orientation). Slim power and volume buttons live on the right edge, just above the MicroSD card slot for adding extra storage. The left edge is bare, while the bottom edge houses a slot for adding a wrist strap.

On the top edge, you’ll find a Micro USB port for charging and connectivity, as well as a headphone/mic combo jack. Also on the top edge, or in the upper-left corner if you’re holding the tablet in landscape mode, is the Windows button.

Most Windows tablets stick the Windows key on the front as a capacitive button. Here on the side it’s not as easy to accidentally press when you’re holding the tablet, but it’s also harder to find when you actually want to use it. In our time testing, we frequently confused it with the power button, which is the same shape. After a while, though, we’re pretty sure we’d get used to the layout.

The back of the tablet houses a pair of speakers, which sit near the bottom edge when you’re holding it in landscape orientation. While we appreciate that there are two speakers, sound output is only okay. We’d like more volume and, ideally, some discernable low-end. But we weren’t exactly expecting that from a low-cost tablet.

Windows tablets have a problem when it comes to screen resolution. Increasingly, Android and Apple tablets sport resolutions at or above 1080p. Drop one of those screens into a small Windows tablet, and things will look great in the Modern UI where the apps live. But jump into the traditional Windows desktop, and buttons and menus become too small.

Even with the 1,280 x 800 pixel screen in the Encore 2, many of the clickable desktop items (like things in the system tray) are frustratingly small and difficult to click. You can fix that by upping the OS scaling in settings, but the tablet doesn’t do this by default. And assuming you’re savvy enough to change the scaling setting, the end result makes the traditional Windows environment feel cramped, as if you’re using a low-resolution screen.

Toshiba does, though, deliver an attractive IPS screen with the Encore 2. There are no viewing angle issues, and the screen is bright enough that we left it at 50 percent brightness during our indoor testing; it never looked dim.

The Encore 2 is one of the first devices we’ve seen that runs Windows 8.1 with Bing, a lower-cost version of Windows that ships with Bing as the default search engine in Internet Explorer. The new version of the OS also has lower system requirements, which is why this tablet is also one of the first modern Windows devices to ship with just 1GB of RAM. Unfortunately, we can expect to see more in the near future.

Otherwise, the OS seems identical to the standard version of Windows 8.1. And we were able to change the search provider in Internet Explorer from Bing to Google without jumping through any hoops. So Windows with Bing isn’t a lesser version of Windows. It’s just front-loaded with Microsoft’s search engine.

Still, we can’t ignore the old refrain about the lack of apps in the Windows Store. Every time we revisit Microsoft’s app ecosystem, we come away feeling just a little bit better. There are a couple more big-name apps now, and the number of apps seems to be growing. But there are still far fewer quality apps available for Windows than there are for either iOS or Android. And chances are, if you’ve used one of those operating systems in the past, a few of your favorite apps will be absent in the Windows store.

Related: 5 Reasons why the Windows 8 Store is a complete mess

Of course, because the Encore 2 runs Windows, it can run also run most traditional Windows software. That’s definitely a plus for the tablet (and Windows slates in general). But having millions of non-touch-optimized programs available is not the same thing as having a modern app store full of appealing apps—particularly for a tablet. And because this tablet has only 1GB of RAM, it won’t run as many standard Windows programs (or run them well), either.

Tablet cameras typically aren’t great—especially on budget-priced slates. And the 5-magapixel rear-facing shooter here is no exception (there’s also a 1.2-megapixel camera up front for video chats). But really, we don’t care. Tablets are too big and unwieldy to make for good cameras anyway, whether you care about looking silly or not.

Still, the camera here is passable, at best. Bright daytime shots look okay on the tablet screen, but indoor shots, even in fairly bright light, often look grainy and washed out. When looked at on a large 1080p monitor or TV, the pictures look even worse. You should be able to get much better pictures from a decent mid-range smartphone.

An Intel Atom CPU and 32GB of internal storage is pretty much par for the course when it comes to budget Windows tablets. Toshiba has, though, dipped down to just 1GB of RAM in this model, as we mentioned earlier. You do, though, get a newer CPU than we’ve seen from previous Windows-based slates. Toshiba outfitted the Encore 2 with a four core Bay Trail-T Atom Z3735G, clocked at 1.4GHz.

How does all that translate to benchmarks? On paper, things seem okay. The Encore 2’s score of 2,204 in PCMark 7 puts the Toshiba Encore 2 technically ahead of the older Dell Venue 8 Pro, which scored 2,166 on the same test. But in our testing, the Dell tablet was more reliably responsive.

The Encore 2 was usually responsive, but it occasionally became sluggish.

In actual use, the Encore 2 was a mixed bag. Usually, it worked well. Browsing in Internet Explorer felt responsive. Most games, including SoulCraft and Zombie Driver HD, ran well, also. But when gaming in particular, the back left side of the tablet got noticeably warm. We clocked it as high as 108 degrees using our infrared heat gun. That’s not warm enough to feel hot, but it’s steamy enough to be uncomfortable to hold for long periods.

Also, while the Encore 2 was usually responsive in our testing, it occasionally became sluggish, often when downloading and installing Windows updates or apps. And at least once, the tablet became so stuck that we needed to reboot it by holding down the power button.

Overall, the tablet is responsive enough to use for Web browsing, running most apps, and light productivity. But we suspect the extra 1GB of RAM found in most Atom-based Windows tablets makes a difference. The Dell Venue 8 Pro, for instance, didn’t have the same intermittent performance issues we had with the Encore 2.

Toshiba claims you can get up to 11 hours of battery life with the Encore 2. In our testing, using the tablet frequently, downloading and installing apps, running benchmarks, browsing the Web, and playing a couple games, the tablet shut down after 8 hours and 2 minutes. And keep in mind that we kept the screen brightness at about half through most of that time. Eight hours of use isn’t terrible, but good Android tablets, as well as Apple’s iPads, still have greater longevity.

If you’re looking for a compact Windows 8 tablet at the lowest price possible, Toshiba’s Encore 2 8 isn’t a bad choice, particularly if its asking price dips even more, as other Windows 8 tablets have in the past.

At $180, it’s not exactly expensive for a Windows tablet, but the only thing that really sets it apart from other similar slates is its 1GB of RAM; most older Windows 8 tablets have 2GB. That’s not a good thing, especially when the Encore 2 had occasional performance hiccups in our time with it. It’s possible, though, that future software updates will fix this issue.

And while the Toshiba tablet does have a nice IPS LCD screen, so does Dell’s Venue 8 Pro. The Dell tablet, while its processor is a bit older, felt more responsive and consistent in our time with it, likely thanks to its extra RAM. And while the Venue Pro 8 launched at $300, it’s now cheaper. As of this writing, B&H Photo and Video has the Dell tablet listed for the same $180 as the Encore 2 8 sells on Amazon. Given the choice between the two, we’d go for the Dell tablet and its extra RAM.