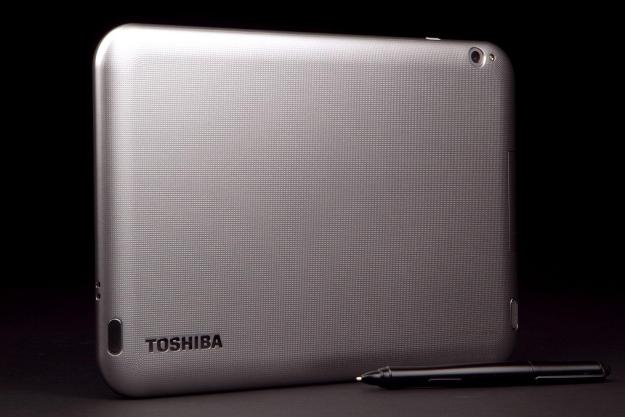 “The Toshiba Excite Write is speedy, has excellent pen experience, and a beautiful display, but it has issues with overheating and there is no slot for the pen.”

Toshiba has been in the Android tablet game as long as anyone. This year, it’s $600 Excite Write has all the fancy specs – a super high resolution 10-inch display, Nvidia Tegra 4 processor, Harmon Kardon speakers – and adds still more on top of that: a digitized pen. This is a direct challenge to Samsung’s Note tablets and a play for students and the corporate set who still take notes by hand and mark up PDFs.

The Excite Write offers one of the best pen/tablet writing experiences for Android as well as smooth, speedy performance, but our experience with the Write did come with some inconveniences.

The Excite Write can’t claim a distinctive design; rounded corners, wide bezel, curved edges, textured plastic back, we’ve seen it all before. This lack of flash doesn’t make for an ugly tablet. In fact, the Write is comfortable to hold and not too heavy for its 10-inch size. The biggest misstep is that there’s no integrated port for the stylus. That means you’re going to lose it. And it’s a bulky, big stylus at that. Without a place to attach or rest the pen, it’s more likely to be lost.

Ports line one edge of the tablet, with MicroSD, Micro HDMI out, and Micro USB hidden behind a port cover while the headphone jack and power port remain exposed. For some reason Toshiba still insists on AC adapters for charging instead of just using the Micro USB port like most other manufacturers. To charge the Write you need a cord the size of one you’d see on an Ultrabook. It’s bulky. Luckily, the Excite Write’s battery life is good so you won’t have to carry the charger everywhere with you.

The abundance of pre-loaded apps makes the tablet more useful, not less.

An 8-megapixel camera and flash sit on back as does a pair of Harmon Kardon speakers. The placement means sound is directed away from the listener, which isn’t great. Any small amount of background noise will make the audio difficult to hear even at full volume. Plug headphones or external speakers in and you’ll get a far better experience.

The 10.1-inch, 2560 x 1600 pixel display is great for reading thanks to the pixel density. We didn’t have to zoom into magazine pages in Zinio to comfortably read small fonts and HD YouTube videos look great. The bright, color rich screen also boasts wide viewing angles.

As close to writing on paper as you can get

Toshiba has years of experience with digitized pens and tablets from its years of working with Windows, so we had high expectations for the company’s Android effort. And from a hardware perspective, the Excite Write and its companion TruPen are top notch. The tip of the pen moves smoothly across the screen and the feel of it is as close to pen on paper as you’re going to get with this type of device. The TruPen itself is a good size and shape, just not as weighty as most regular pens this thick. The lack of heft may throw you off at first, but we got used to it quickly. In addition to the button on the side, there’s an eraser button on the top of the pen. We were never in danger of scratching the screen even though that button is hard plastic.

The precision pen tip is excellent for writing and we filled dozens of virtual pages with notes and scribbles. We never saw a lag between our strokes and marks showing up on screen in Toshiba’s TruNote app or the handwriting keyboard, and using the pen to play games like Bejeweled Blitz didn’t slow us down. In other note apps, like Papyrus, the pen’s strokes lagged behind our own just enough to be noticeable, a problem not unique to the Write. Sadly, there are no cool pen hovering tricks like you’ll find on the Galaxy Note 8.0.

One advantage of this type of stylus is good palm rejection, and the TruPen does make that possible. There’s one snag: the bottom bar. There are no physical buttons on the Excite Write so Jelly Bean’s bottom bar with Home, Back, and Recent Apps is always around. Even when an app ignores our palm resting on the screen, the bar sometimes doesn’t. Our hand or arm often accidentally exited the application when the tip of the pen got too far from the screen. To keep this from happening we ended up covering that part of the screen with a cloth – not ideal.

The Excite Write and companion TruPen are top notch.

This problem isn’t unique to the Write. We also encountered it on the Galaxy Note 10.1. It’s less of a problem on the Note 8.0. If your arm accidentally activates those buttons, all you have to do is turn the tablet upside down or to landscape. Getting around this issue on the Write means changing how you position your hand (or using the hack we did).

You can’t make a pen-enabled tablet without also bundling a note-taking app. Toshiba’s is called TruNote, and it contains some nice features. The app can turn handwriting into editable text that is easily exportable to other programs, and it can convert line drawings into graphics for ThinkFree Office. That’s par for the course with most pen tablets. TruNote goes one further and makes handwriting searchable so you can find key words even if you don’t convert to text. We don’t like that the app only accepts handwritten notes, no keyboard input. We really don’t like that the text recognition and conversion only works in portrait mode. And while the desktop-esque interface is cute, it’s not very useful for organization. TruNote is ultimately less robust than S Note for Samsung tablets and may have users seeking out third-party options.

The final pen-enabled feature is a handwriting keyboard called Stylus Mobile. With this you can use the pen to enter text in any app – just choose this keyboard instead of the stock Android one in Settings. The text entry area is only one line high and keeps you from entering a lot of text speedily. It’s fast at recognizing words and doesn’t require neat handwriting to work.

Camera is best as a scanner

The pictures produced by the 8-megapixel camera on the back of the Excite Write didn’t impress us, particularly those taken in low or mixed light. That’s not where this camera’s strength lies. Step over to the TruCapture app and you can take pictures of printed text on paper or on a whiteboard and get a good quality result. You don’t even need to take the picture straight on – the advanced cropping tools will fix the skew. The app is capable of reducing the glare on whiteboards and the digital zoom is more helpful than we would have assumed thanks to good image stabilization. From TruCapture you can export the images as JPEGs or PDFs.

Android 4.2 gets the job done

Toshiba doesn’t mess with the interface or functionality of Android 4.2.1 Jelly Bean. The only contributions from the company come in the form of some extra settings and a ton of pre-loaded apps. To get started with the Excite Write you don’t need to visit the Google Play store at all unless it provides you joy. Still, we wish that Toshiba would add a few interface tweaks to better take advantage of both the pen and the pixel density. Samsung and Sony each have ways to utilize more of the screen and multitask; we feel the loss of that customization here.

One particular area where we wished for some tweaking is the keyboard. The one that comes with Jelly Bean is decent, but very basic. And the inclusion of the handwriting keyboard needs a more up front implementation. It should be integrated into the standard keyboard, much like Samsung does on its Galaxy Note.

Toshiba’s in-house apps – Book Place, News Place, Apps Place, File Manager, and Media Player – are mostly redundant and easily ignored if you don’t need them. The inclusion of PrintHand, an app that connects to cloud services and wireless printers (including Google Cloud Print ones), is very useful, as is Evernote. The office suite Toshiba chose to work with TruNote is ThinkFree Write. That’s unfortunate, since it’s one of our least favorite Android office suites. This version does nothing to change that opinion.

The rest of the games, media, and reading apps are well-curated. Though we often complain about bloatware, the abundance of apps makes the tablet more useful, not less.

Powerful specs and good battery life, but it runs hot

Expectations are high for tablets running on Nvidia’s new Tegra 4 platform. Packed with cores optimized for graphics, gaming, and raw power, Tegra 4 is the perfect chip for a productivity machine with a high-resolution display. In our experience, the performance lives up to the hype. Everything from the graphic interface to switching apps to playing high-end games ran smoothly and the 2GB of RAM no doubt aids in the tablet’s multitasking prowess. It scored 12,373 on the Quadrant benchmark, far above the Nexus 10 (4,500) and Sony Xperia Tablet Z (7,640) to rise up to the level of the Galaxy S4 (12,000). This is just about the most powerful tablet we’ve used.

The left side got so hot while playing games that we had to set it aside to cool down.

However, taxing the Excite Write, even a little bit, caused it to heat up uncomfortably. The left side got so hot while playing games that we had to set it aside for a few minutes to cool down. When hot we also noted a bit of lag in some apps, though not in the OS overall.

The tablet comes with 32GB of internal storage expandable via the MicroSD card slot. The Wi-Fi radio inside is dual-band 802.11ac/a/b/g/n and Bluetooth is the latest protocol, 4.0.

Battery life is rated for 10.5 hours of video playback. With heavy mixed usage and the brightness turned all the way up, the Excite Write battery lasted over 14 hours without a charge. Employing any battery saving measures will make it possible to go a day or two without having to charge it with on and off usage.

The Toshiba Excite Write is close to being a great tablet. Pen nerds looking for a digital solution that feels right will find this device tempting. Toshiba got pen control perfect. The display gets high marks, too. And though the camera isn’t the best for taking pictures, it’s useful in other important ways, like document scanning. However, we can’t overlook how hot the Write gets, the lack of place to stash the TruPen so it doesn’t get lost, or the missed opportunities to make Android more useful for fans of handwriting. These drawbacks might be overlooked if the tablet cost less. A device that costs $600 shouldn’t have this many missteps.

If a good pen and tablet combo is what you’re after, the Galaxy Note 8.0 is a better choice right now.